You know it was a good afternoon when my only criticism of the performance I saw of Boris Eifman’s Anna Karenina at the David H. Koch Theater on Saturday is that the lead ballerina was, maybe, too young for the role. I can live with that.

Well, I have other minor criticisms of the ballet also, but the performance by Daria Reznik as Anna was so powerful, so riveting, and yet so engaging, that any minor flaws I see in the ballet, as well as any that may have been prompted by her youth, quickly fall by the wayside. The other lead dancers delivered noteworthy performances as well, but the title role is so dominant that if that performance doesn’t work, the ballet would fail. With Reznik, it soared. 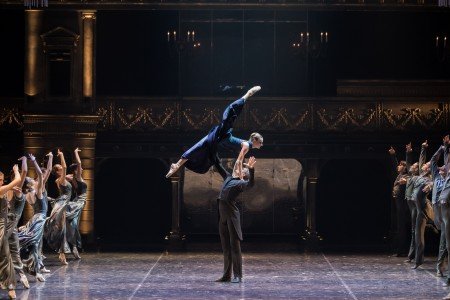 It helps that Eifman’s ballet is more accessible, and a bit less over-the-top, than other pieces of his recently performed in New York. Of course, with Eifman, that’s relative. Those turned off by the emotional/ psychological turmoil that he translates into mostly feverish movement will probably not be won over by this ballet. However, Eifman’s Anna Karenina, which premiered in 2005, shows a greater level of choreographic restraint than the pieces he brought to New York last year – Red Giselle, created in 1998, and Tchaikovsky, Pro et Contra (“Tchaikovsky”), in 1993.

I recognize that the words “Eifman” and “restraint” are not usually present in the same sentence, but while his Anna Karenina is still over-the-top, it’s far more focused. Fitting for Eifman Ballet’s first appearance in the house that Balanchine built, the story is distilled to its essence: the ballet is about Anna, her husband Karenin, and her lover Vronsky. There are no other lead characters – or even other characters that are identified (with the exception of her young son, who has two very brief non-dancing appearances). And the issues involved, although inherently complex, are straightforward: Anna’s options are to remain in a reasonably harmonious but unfulfilling marriage, or to leave her “established” Russian family and yield to her passion. She chooses the latter, and lives forever change. But as a consequence of this distillation and simplification, there are fewer distractions, and we get to know the characters more clearly. 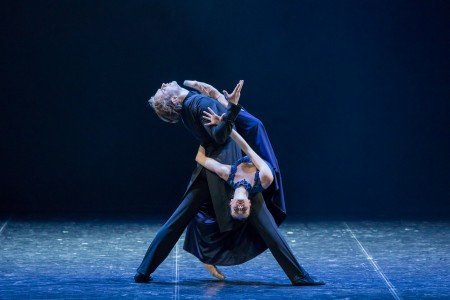 As I observed in my review of Red Giselle and Tchaikovsky last year, for Eifman, ballet movement is about expressing and visualizing emotion, including the subconscious psychological forces that create and respond to emotional stimuli. Last year I labelled his style as “neo-romanticism” – not Romantic ballet style, which it decidedly is not, but in its relentless intensity, and its fusion of nonstop action with Russian/Soviet athleticism and electric theatricality. It’s all melodrama all the time. That might sound tiresome, and perhaps as artistic as a hammer hitting a nail. But what Eifman’s choreography lacks in finesse it makes up for in power. Although the steps are ballet steps executed with abundant ability, the angle of an arabesque or the positioning of hands is less significant than that the choreography, and the executing dancer, convey the emotional angles and positioning that his approach demands. Everything seems exaggerated because the emotions are amplified. In a sense, Eifman is to ballet as El Greco is to painting. And although the images he creates may be lurid and visually shocking to the eyes, and although his ballet vocabulary is limited and at times repetitious, Eifman’s creations also are undeniably exciting to watch. 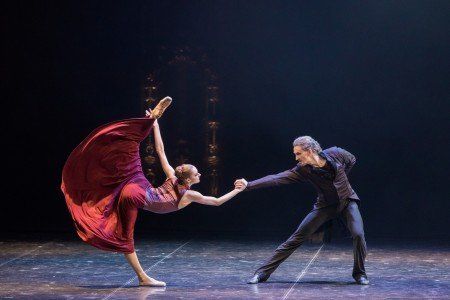 In his Anna Karenina, the parameters of the psychological examination of his characters are considerably more narrow than the mashup of multiple stimuli in Red Giselle, and more concrete than in Tchaikovsky’s psychodrama. And here he takes his emotional positioning a step further – or at least differently, with Anna’s internal torment projected in Graham-like contractions as well as balletic thrusts and hyper-extended limbs.

The greater focus is also reflected in the score that Eifman curated from various Tchaikovsky sources – aside from its here being a camouflaged salute to Balanchine. [Selecting a ballet for his company’s first appearance in New York City Ballet’s home that begins with the first movement from Tchaikovsky’s Serenade for Strings – the music that Balanchine used for Serenade, the first ballet he created in America and one of his most beloved – could not have been accidental.] Even though the music instantly made me think of Balanchine, Eifman’s selections of this and other excerpts from Tchaikovsky (including other scores that Balanchine used) not only fit the choreographic and narrative moments, they framed and enhanced them. Hearing, and seeing, the promenade segments from the final movement (Tema con Variazioni) of Tchaikovsky’s Suite No. 3 as musical background for a phantasmagoric, and scary, Venetian Carnival gives the composition a completely different perspective from the way Balanchine saw the music – certainly not what Tchaikovsky intended, but it works. On the other hand, his use of the Fantasy Overture from Romeo and Juliet, which I was certain was coming even though the specific compositions that Eifman used were not listed in the program, was certainly as Tchaikovsky intended.

My criticisms: Eifman plays fast and loose with Tolstoy’s novel, not just trimming all but its essence, but by creating events that didn’t happen in order to maximize the choreographic bang.  Sure – artistic license allows him to invent an opening scene of Anna’s son playing with a toy train, rather than the novel’s stranger’s accidental death by train. That sort of license works because it recreates the foreshadowing of Anna’s eventual suicide and reinforces Eifman’s theme (family vs. passion), without creating a superfluous character. But I think artistic license went too far when, in light of her failing relationship with Vronsky, Anna takes solace in opium. Where does that come from? And why was it necessary? It provides the impetus for the most over-the-top choreography in the ballet, culminating in Anna’s death, but wouldn’t her madness alone have been sufficient to incubate the same choreographic manifestations? And although the corps dances for the Society Ball and the Carnival revelry are quite good, and although Eifman’s display of inebriated soldiers in the Officers’ Club is a welcome – albeit too understated – bit of intensity relief, the other corps dances don’t convey the same level of choreographic sincerity or inventiveness. 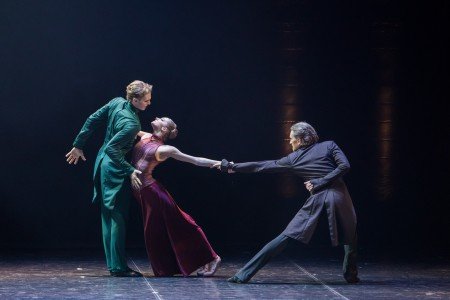 But in the overall scheme of things, these are minor criticisms. Eifman’s Anna Karenina works because his choreography amplifies his characters’ emotions without dominating them: they’re people one can identify with, not mere vessels to display emotional events. And some of Eifman’s images are extraordinary – not only the off-the-charts eroticism of the visualization of Anna’s drug-induced stupor, or the sensationalism of her suicide, but even in the simple expressions of emotional choice that Eifman exploits. Pas de trois that reflect emotional turmoil and the pull of oppositional forces are not unusual in ballet, but the one here is a model of passion and clarity – far more successful than a similar pas de trois in Red Giselle. And the powerful simplicity of the final images in the first act are every bit as powerful as the more complex and emotionally devastating scene of her suicide.

But the heart of Anna Karenina are the characterizations of the three leads. Sergey Volobuev is a dominating stage presence. He excelled as the Commissar in Red Giselle last year (I described him as Alexander Godunov as if possessed by Darth Vader), as well as as Tchaikovsky’s Double in Tchaikovsky Pro et Contra. Here, as Karenin, he’s equally effective – maybe more so – one moment he’s an emotionally distant, entitled husband who knows only what he wants; another moment he’s emotionally shattered. It was a masterful performance. As Vronsky, Subbotin, whom I had not previously seen (at least not in a featured role), was appropriately dashing and romantic, and passionate until passion ran its course. He’s somewhat of a handsome shell, without the emotional depth inherent in Karenin’s role, but that’s as Eifman intended. Like Volobuev, however, Subbotin is a superb partner.

But this was Reznik’s performance. Appearances on stage can be deceptive, but Reznik looks tall and taut, like a stretched rubber band, and seems always to have a serious expression on her face. She’s not a cute little soubrette. When she first appears, she looks austere, as if she were a deer caught in headlights. I thought maybe nerves; or perhaps an attempt to look older than she is. 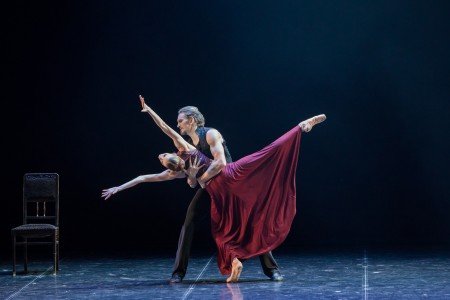 But I quickly began to see her portrayal differently. She was, appropriately, going through the emotional motions of a relationship – and was reflecting her character’s emotional distance from her husband. But when she began to dance at the society ball, and when she met Vronsky, Reznik’s demeanor and stage presence measurably changed. And as the ballet progressed, she became more and more mesmerizing. It’s partly the choreography, but it’s also her. Those eyes, even when her face is solid steel, are consistently aflame, whether registering passion or the absence of it. And when she smiles, the steely expression evaporates in an instant; her entire countenance changes – she’s emotionally free.

But much more impressive than the way she looks in the role onstage is her command. Reznik executes Eifman’s choreography as if it had been made for her. Eifman’s choreographic romanticism has a circular flow to it that can look like water boiling, or like waves in a storm, but as graceful as they are turbulent (think The Great Wave off Kanagawa by Hokusai rather than the tempestuous ocean waves of JMW Turner). Reznik moves like that kind of ocean wave, tormented by the emotional storms in her head and around her, stretched to the limit, undeniably rapturous, but always under control.

And the more I saw her move, the more I saw a woman married to a man 20 years her senior, as the novel describes, attempting to break free. So she had a kid (or two) in her teens. Like another wunderkind from the Vaganova class of 2016, Alena Kovaleva, who appeared in New York last summer with the Bolshoi Ballet during the Lincoln Center Festival, Reznik left an impression that is not easily forgotten – not that anyone would want to forget it. And she’s only 20 years old.

When you give a performance that’s that engrossing, age is just a number; talent is timeless.

Too, too much: Eifman Ballet’s Rodin