When Christopher Wheeldon branched into musical theatre with his award winning, An American in Paris, he obviously learnt a thing or two. His adaptation of Cinderella to the huge dimensions of the Royal Albert Hall has moments of breath-taking spectacle while keeping the entire company fully engaged and literally on their toes for the duration of a very busy evening. 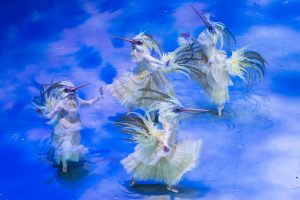 Cinderella in the round
Photo: Ian Gavan

Cinderella, written for the Dutch National Ballet in 2012, is freely adapted from the traditional tale to develop a substantial back story, notable for the three principal roles: Cinderella, Prince Guillaume, and his friend Benjamin. We see the child Cinderella weeping at her mother’s grave, and then the two boisterous friends causing havoc in the palace corridors. Cinderella, treated as a servant in her own house, now ruled by her step-mother, has the guidance and protection of four Fates who enhance her role as they lift and carry her as she fulfils her household duties.

In Act 1, she is able to establish herself as a young woman of strength and character. Alina Cojocaru and Maria Kochetkova, both fragile in build but with huge inner strength, looked the part while each in their own way allowing the spark of fierce independence to shine through.

The King demands the reluctant Prince should marry and in defiance he readily joins in a subterfuge, wearing a beggar’s old clothes to accompany a royally dressed Benjamin to deliver engagement ball invitations. It’s a clever ploy that gains him Cinderella’s sympathy and a warm seat by the fire. While this takes some of the sheen off their encounter at the ball, it provides a lovely, private moment of togetherness dancing on the kitchen table.

The fairy-tale magic of Cinderella’s transformation for the ball was the visual high spot. The dozens of dancers from the Seasons came together in a kaleidoscope of colour and the stairs through the auditorium were alive with the strange forest creatures making their way to the stage. The excitement builds as Cinderella’s carriage, created by the Fates rearing in their horses’ heads or twirling giant wheels, carry her to the ball in a cloud of golden silk. 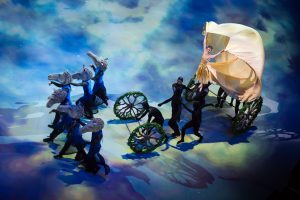 Cinderella in the round
Photo: Ian Gavan

Opening on a centrepiece of a giant chandelier, the ballroom becomes a swirl of purple and blue silk and waltzing couples. While the death of Cinderella’s mother was handled with great sensitivity as, like an angel, she flies up to heaven on huge white wings, . I wish there had been a moment of similar imagination to fly Cinderella into the ballroom to replace her rather understated entrance. Cinderella enchants the guests (and audience) with a quirky solo ending on a dramatic high-flying finish, thanks to the Fates who are still on hand to see she gets the Prince’s attention. Prince and Cinderella, of course get the grand pas and there is the traditional turmoil at midnight.

The comedy was left to the stepmother and the two sisters, one beastly, one sugar-sweet and definitely not ugly. For mother it was a no holds barred battle to ensnare the Prince into marriage with one of her daughters. The scheme shifts to high comedy as a surfeit of wine and ambition combine to floor her. In Wheeldon’s hands it becomes an attractive role demanding both technical and comedic skills. Tamara Rojo took to the role in the manner born, in fierce, broad comedy while Begoña Cao gained her laughs with a sharper, finer edge. Some of Wheeldon’s cleverest comic scenes come in the sisters’ duet of virtuosic one-upmanship. Just when bitchy Edwina seems to have triumphed, Cupid shoots his arrow and Benjamin is smitten by sweet bespectacled Clementine and a delightful alternative romance blossoms. In the two, very good pairings I saw, Shiori Kase shone with a totally endearing, huggable Clementine. 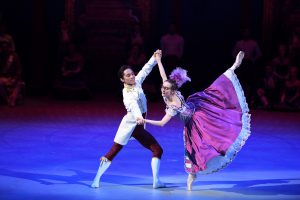 The ballet gets a high energy boost from Benjamin who bags some of the best dance of the evening and Jeffrey Cirio, made a strong impression in the role as support to Isaac Hernández’s prince. Cirio’s later performance as the Prince, highlighted the dramatic advantages built into this supporting role. However, the vast space of the arena gave these wonderful technicians, Hernández, Cirio and Francesco Gabriele Frola, (as Benjamin) a playground for a magnificent display of jetés en manége and leaps of all descriptions. The layered storyline in Act 1, gives Cinderella the chance to develop a sympathetic and appealing character but the centre stage stardom needed in Act 2 is underplayed leaving even truly great dancers like Cojocaru and Kochetkova with an uphill battle to catch and hold attention,

The Fates, Junor Souza, James Forbat, James Streeter and Francisco Bosch, masked and unobtrusive underpin the ballet, providing both physical and dramatic support in some of the most interesting choreograph of the evening. The sheer amount of great talent on stage is displayed in the doubling up of the solo seasons: just seeing Aitor Arrieta and Daniel McCormick dancing side by side in the Summer variation shows the enormous and growing strength of the company.

Basil Twist’s magical tree from the stage show is sadly lost, but the brilliant projections to create house, palace and blue sky filled with chirruping birds and a clever ‘tree’ of silk panels fills the gap. Julian Crouch’s grotesquely appealing forest creatures are an inspired touch. The clever opening of Act 3, with dozens of hopefuls waiting their turn to try the shoe was another successful piece of staging. While Wheeldon’s choreography is at times uneven, the beauty of Prokofiev’s score and the visual setting carry the evening.