Akram Khan is one of my heroes. I remember being mesmerised in 2000 by his 15-minute solo, Fix. Blending Kathak and contemporary dance he combined slow, controlled movement with electrifying, fast steps and arm movements. In the same year, Rush, his first ensemble piece, impressed us at the old Laban Centre’s small theatre. Showing how quickly his achievements were recognised, Rush was adopted two years later as an Advanced Level dance exam set work.

The past decade has seen Khan creating a body of work for his own company and English National Ballet, which places him among today’s leading dance makers. In a recent English National Ballet mixed bill, his heart-breaking duet from Dust was the outstanding jewel among a collection of classical and recent works. His Giselle, also for ENB, is one of the finest new ballets of the 21st Century. So, Creature, his new full-length ballet for ENB was eagerly awaited, to say the least, especially as it was delayed by eighteen months due to Covid. 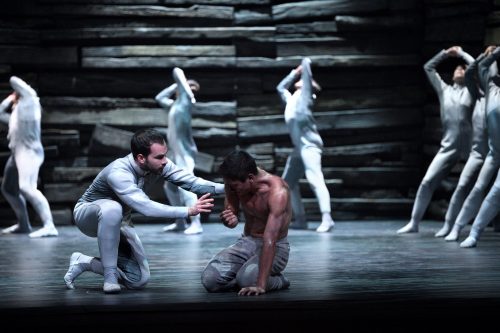 Khan has explained that starting from Mary Shelley’s Frankenstein, his concept shifted to George Büchner’s Woyzeck, describing the mental and emotional disintegration of a man used in a callous experiment. In an interview with Maggie Foyer in Dance Icons, Khan describes how he has updated this story, “It’s what Elon Musk is talking about that we should give up on Earth and move to Mars. Setting up a human colony on Mars is the first step. However, its harsh climate makes it impossible for human habitation. Creature is based on that project.”

I do not share Khan’s view of Musk, as alongside his fascination with Mars, Musk has developed innovative electric cars and is now building the world’s largest battery complexes to store renewable energy. Thus, he is at the forefront of developments to save the Earth from climate change.

Set in an abandoned Arctic research station, falling apart around them, Creature depicts the impact of dangerous experiments conducted on the central figure to develop means of survival in harsh conditions. At the end, the victim of these experiments is abandoned to a lonely fate. 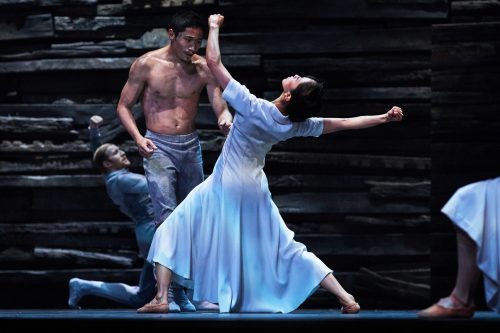 The early sections promised much. Khan’s opening choreography for Jeffrey Cirio as the Creature was astonishing. In Cirio, Khan has found a dancer who can accomplish the fastest movement, as Khan himself did twenty years ago. With jagged steps, hands, and spins, Cirio executes the mix of Kathak and contemporary steps in exemplary style. At the start, we are also introduced to Marie, the Creature’s minder, who doubles with cleaning work. Erina Takahashi provides an expressive performance, although her choreography is muted. A high spot is her duet with the Creature on a sloping table with a mixture of her concern and uncertainty, amid Cirio’s earnest desire.

The temperature moves up again in the first half, with the introduction of the Army. The corps achieve a high degree of synchronisation with lines and tight clusters in Khan’s exhilarating choreography. Whereas in Khan’s Giselle, ballet steps are a key ingredient, here they are the minority and given the narrative, there is no place for pointe work for any of the characters or the corps. 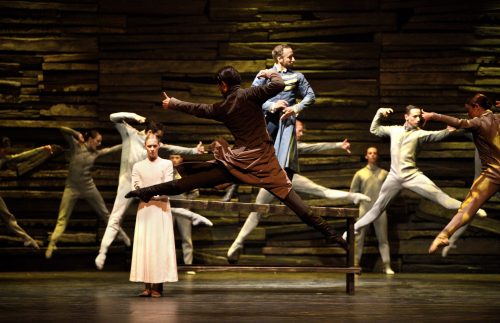 Other solo dancers impressed: Stina Quagebeur as the Doctor also relishes Khan’s movement and mixes a no-nonsense attitude to her job with flashes of concern for her victim; Ken Saruhashi makes the most of his rapid steps as the Captain; Victor Prigent as Andres, another cleaner, is convincing in his sympathetic friendship for the Creature.

The production takes a backward step later in the first half, with the introduction of the Major, the controller of the experiment, and for me, never fully recovers. I was puzzled why the Major was dressed in a long flowing gown like a royal figure from an earlier century. His character is malevolent: a vague apology when it appears that his actions have killed the Creature, then claiming credit when the Creature comes back to life. Later, he desires Marie and then kills her when she refuses him. Finally, his experiments successful, he leaves with his Army, abandoning Creature. Often, evil figures in ballet get the best steps, but perhaps Khan’s antipathy to the Major results in the dullest choreography on show, leaving Fabien Reimir unable to display his undoubted talent.

Other problems are a lack of narrative clarity, the single dreary set throughout, the drabness of the costumes and after a while, the unremitting style of the choreography, in sharp contrast on all these fronts to Khan’s Giselle. However, a finale bonus is a repeat of Cirio’s marvellous opening solo as the station collapses around him.

While Creature has some impressive elements, its limitations erode the overall effect. Nevertheless, it has not diminished my desire to see more of Akram Khan’s work in the future.