Akram Khan’s Giselle is a work of infinite variety that offers something new at each performance. This is most apparent in the different mix of personalities in the central triangle. Daniel McCormick made his debut as Hilarion, while Crystal Costa and Aitor Arrieta were, I think, giving only their second performances in the lead roles. 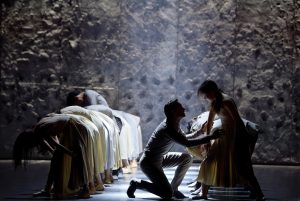 Costa gave the role her own signature, with emotion in every fibre of her body. Her feisty Giselle is a spirited character despite the harsh conditions, full of love for Albrecht and for dance. This made the moments of vulnerability all the more poignant. At the climax of the Act 1 denouement, Giselle and Albrecht kneel together, alone on a crowded stage before he thrusts her to the floor shattering her dreams. She makes one more plea, resting her head on his thigh only to fall again as he strides off to meet Bathilde.

Arrieta is a fitting Albrecht, elegant and clean cut. His privileged upbringing denies him Giselle’s inner strength, but his heart is true. He opens the second act among his fashionably dressed family and expresses his pain in a fierce solo of extravagant leaps and violent gestures. It finds emotional echoes of the traditional mad scene as he retraces the skipping dance from happier times.

Act Two has all the right ingredients, a Giselle of pure love and forgiveness and Albrecht all contrition. Khan has written a duet of virtuosic complexity that develops so fluidly the moves seem preordained. It forms the climax of an articulate and effective narrative.

Daniel McCormick’s Hilarion was a most impressive debut. He captured totally the weirdness of the splayed hands, high retires and four-limbed scurrying across the stage and also the layered character of the entrepreneurial climber, licking the boots of the boss while kicking the worker below. 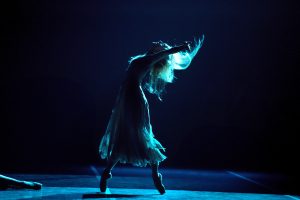 Isabelle Brouwers too, impressed as Myrtha. She was fierce in her incantations, forcing life into the limp body of Giselle and retaining her authority throughout. The long thin staves carried by the ghostly band are a stroke of theatrical genius. They serve to link, to separate, as percussive instruments or as weapons. These wild women with loose hair, their hems stained with grave dirt and hovering on the tips of their toes would have thrilled Théophile Gautier, one of the original librettists. They are truly the stuff of nightmares. 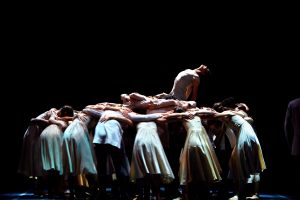 Khan’s ensemble choreography is masterful and the ENB dancers enter into the spirit heart and soul. The circles that surround the Giselle in her despair, rise and fall in keening waves. The wild skipping step as hordes gallop across the stage sometimes contrasting the central action and sometimes becoming the focus, structures the plot superbly.

Giselle whether in nineteenth or twenty-first century guise is a love story. Passion reaching beyond the grave must be there and at this performance it happened.