Compared with the dozens of ballet competitions on offer internationally, the small and perfectly formed, ENB Emerging Dancer Award, is a gem. It has only three grand pas, six diverse contemporary solos and an extra pas, to see how last year’s winner has progressed. Standards were high, evidenced in the skilfully edited videos, courtesy of Laurent Liotardo and Graham Tilley, as well as the on-stage performances. The introductions that the videos offered set a friendly, personal tone and, backed up by the knowledge that these young dancers, most in their first few years of professional life, were nominated by fellow artists, it made for a feel-good evening in a theatre packed with friends and colleagues. 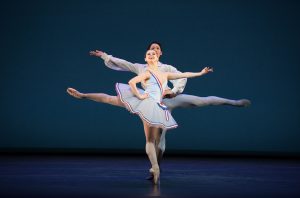 The grand pas de deux from the classical repertoire still set the benchmark for technical standards and make huge demands on young dancers. Julia Conway was this year’s Emerging Dancer; a spirited performer with true charisma. She made a good choice with Flames of Paris, danced with Rentaro Nakaaki, where her natural exuberance and crisp fast turns were seen to full advantage. Nakaaki, who I suspect was also a close contender for the top award, gave this full-blooded show piece the attack it craves with spectacular height and spin. Conway scored high on her contemporary solo, written by Miguel Altunaga and probably the best choreography of the six solos on display. It showed her skill in off-centre, released movement while offering a subtext to reveal a performer of intelligence and depth. 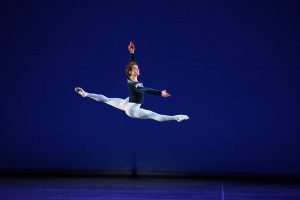 Grand Pas Classique was a good choice for Shale Wagman, also a possible contender for the top prize. His technique, while not short on virtuosity, has a classical purity that is eye-watering. He has a plié of softest perfection and jumps that bound effortlessly heavenward. His partner, Alice Bellini, showed a fine classical finish and proved her strength on the relevé diagonal but had a nervous start and wasn’t encouraged by a tutu of sad and droopy frills that too often got in the way. However, I did enjoy her quirky, Clan B, an alternative Sylph in tartan shorts, choreographed by Sebastian Kloborg. 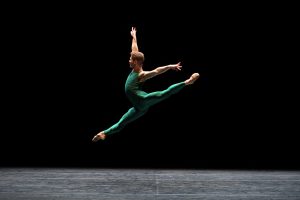 The wedding pas from Coppélia was the choice of Emilia Cadorin and Rhys Antoni Yeomans well cast as a happy young couple full of smiles. It was given an enjoyable performance although I wish it could be accepted for its character and charm rather than trying to make it just another virtuosic grand pas. Yeomans virtuosity also stood him in good stead in his solo from Forsythe’s In the Middle, Somewhat Elevated and his warm personality bagged him the People’s Choice Award, chosen by audiences over the season.

The Corps de Ballet Award went to Eireen Evrard. It was supported by cheers across the audience and left her stunned and delighted in equal measure.

The final pas, Don Quixote was a triumph for last year’s winner Daniel McCormick dancing with Francesca Velicu. He has consolidated his emerging status with a season of fine performances, notably in the Pas de Trois in Swan Lake and seems set for greater glories. Velicu, an artist of great passion, is also no mean contender in the virtuoso stakes completing a series of dazzling fouettés.

Emerging Dancer celebrated its 10th anniversary this year and Tamara Rojo Director of ENB together with host, Adam Cooper, and the judging panel of Sarah Wildor, Mavin Khoo, Carrie-Anne Ingrouille, Gerald Dowler and Michael Coleman made it another memorable one.