Manon Lescaut is a cruel tale of vice and venality salvaged by a love that grows stronger through adversity. In Kenneth MacMillan’s ballet the drama and choreography, accompanied by Jules Massenet’s haunting melodies, rise above the dross to realms of beauty.

Jurgita Dronina’s Manon arrives in Paris, a breath of fresh country air, utterly enchanting but smart enough to know that the eighteenth century offers no safety net to a girl of her means. Her bright eyes sparkle as she dupes her doddery, wealthy suitor. Manon’s beauty attracts more powerful players and even her quick-witted brother finds himself out of his league. If she seems too easily tempted by money, one has only to look at the patriarchal society that shapes her, a culture where women are just another commodity with a price for each market. 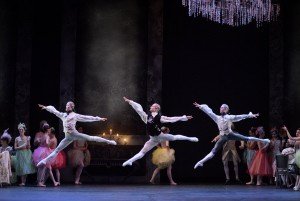 As Des Grieux, Isaac Hernández gave a performance of great passion and brilliant technique but the lyrical poetic edge that should set him apart was not always in evidence. However, at their first meeting, he matched her sweetness and their gentle pas de deux struck the right note of blossoming love.

The bedroom pas de deux was, as ever, a highlight as Dronina and Hernández ride on waves of passion and Dronina’s dramatic dive onto the bed, in a final ecstatic gesture, says it all. Then with lightning speed, she managed to convince in her surprising change of affection, looking longingly, albeit briefly, at the rumpled sheets before making her exit without a backward glance.

Dronina transforms with elegant ease into the queen of the ballroom. Now more aloof, she shows her technical perfection as she is lifted and paraded by a cohort of men. Des Grieux’s intrusion unsettles her and she has another emotional U-turn to make before throwing caution to the wind as they escape together. In this scene, packed with important detail, particularly in the card playing deception, the precision was lacking resulting in a messy climax. 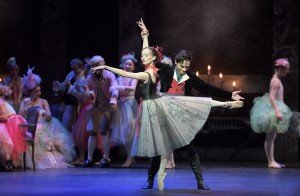 Daniel McCormick as Lescaut, displayed a technique of razor-sharp brilliance and a strong dramatic flair that stood him in good stead in the show piece drunken pas de deux with Mistress, Katja Khaniukova. She was, fortunately, steady as a rock, a very cool customer.

Fabian Reimair, as Monsieur GM, had the right stomach-turning touch as he runs his hands over Manon’s body. But I felt he would have fared better without the heavy, almost grotesque, make-up that distracted from the exterior normality of this base character. James Streeter, as the Gaoler, has the other strong character role, a man you pray you’ll never meet. His lewd abuse of Manon and subsequent murder create the tipping point for the lovers’ descent into destitution and death. Their last duet, two ragged creatures, trying to find meaning in their last moments together, was heart-wrenching. 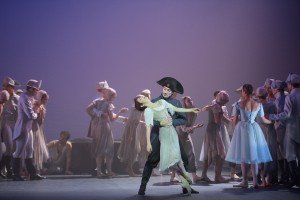 The stripped-down set, from the Royal Danish Ballet production, throws the drama into sharp relief and has the benefit of enabling the production to tour widely but the costumes, particularly in the 3rd Act, an extravagance of gaudy tulle, seem too light hearted and circus like for a situation that needs only a fragile crust of glamour. I missed the gravitas that Geordiadis’ costumes add.

For the English National Ballet, it’s the end of a very long season of three major productions where they have shown their strength in quality performances with an astounding number of cast changes. The orchestra under Gavin Sutherland have been with them every inch of the way in a marathon achievement of which they can be justly proud.