In her final season as Artistic Director of ENB, Tamara Rojo has created an innovative version of Petipa’s Raymonda. Although the rich choreography of the traditional third Act is frequently performed here, this is the first time a British company has staged a full version. The excellent programme articles cover a wide range of perspectives including research on the ballet notation, the treatment of the score, the history of the War and an interview with Rojo about her vision for the ballet. She describes how she was keen to stage Petipa’s choreography from the first two Acts and celebrate Glazunov’s score, but concerned about the problematic racism in the original, involving the Crusades and a Muslim villain. Working with dramaturg, Lucinda Coxon, Rojo’s version is set around the Crimean War, which enables the Arabic enemy Prince to be transformed to an Ottoman Prince and General, Abdur Rahman, allied to the British. 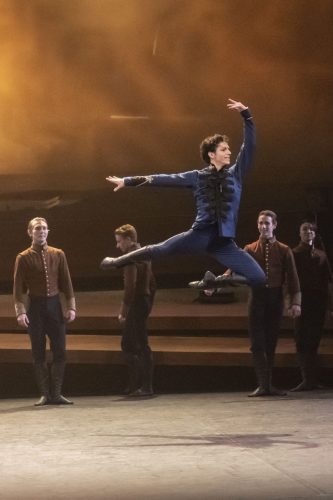 The ballet opens in Raymonda’s home and whereas her sisters are satisfied with sewing clothes for the troops, she is reading about the War in a newspaper. We meet for the first time John de Bryan, just off to the War and after he leaves, Raymonda, played by Shiori Kase, decisively packs her bags and also heads off to the War with a desire to make a real difference.

The second scene sees our heroine in a British Army camp amid enthusiastic dancing of the soldiers eager to get into the fray. Isaac Hernández as de Bryan dances with a combination of power and elegance exemplified in his soaring grand jetés. Aitor Arrieta and Fernando Carratalá Coloma play de Bryan’s officer friends and were superb in their duet – one of the highlights of the ballet. We are also introduced to the Ottoman Army, with fights breaking out between the Brits and the Turks, and Raymonda catching the eye of Jeffrey Cirio’s Abdur Rahman.

The third part of the First Act features Raymonda’s dream sequence, with soldiers and nurses in pale grey providing some of the most memorable ensemble sections of the evening, crossing and circling the stage. We also see the initiation of the love triangle between the three leads. At the end of the Act, an invitation comes to a party given by Abdur Rahman. While Raymonda’s friends urge her to refuse, she is adamant to seize the opportunity. 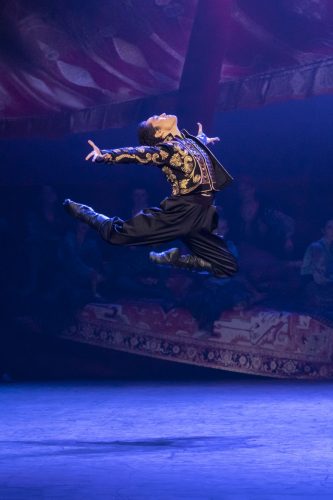 A couple of narrative aspects in this Act did jar, however. Firstly, we see little of the nurses at the start and their patients seem to have merely minor injuries. Later in the narrative, even when the Light Brigade return from their disastrous charge, the horror and squalor of the Crimean War is not depicted. Fundamentally, we see a romanticised vision of the conflict. Secondly, in the camp, de Bryan proposes marriage to Raymonda, who is clearly not keen, but doesn’t want to disappoint with a refusal. Having established in the first scene that she is of strong character, this episode didn’t gel.

In Act Two, we see Rahman’s party and the opportunity for national dances, choreographed by Vadim Sirotin, a Russian specialist in this form. The highlight was the spirited Ratchuli dance from Georgia, and Emily Suzuki on pointe and Daniel McCormack provided energy that flowed off the stage. Jeffrey Cirio also has a solo and steals the show with his speed, jumps, spins and virtuosity. Overall in Rojo’s ballet, we might have seen more of the Rahman character. The Act ends with the return of the devastated Light Brigade and de Bryan falling exhausted at Raymonda’s feet. 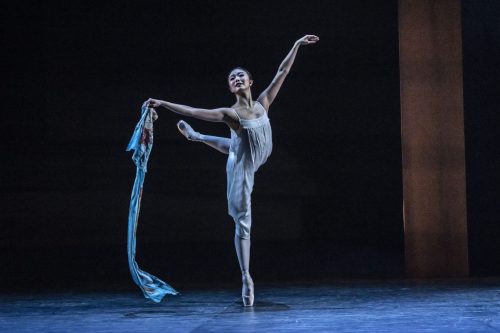 Act Three sees a return to England and the wedding of Raymonda and de Bryan. What about the Hungarian dances, I hear you say. No problem, there are farmhands from Hungary working on the estate and keen to join in the festivities – all clear now? The usual celebration of the marriage is replaced by Raymonda’s uncertainties about the wedding, exacerbated by the appearance of Rahman as a guest – a very different and unsettling take on the traditional mood. At the curtain, Raymonda leaves again, on her own, bound we know not where. Shiori Kase in the well known final variation is admirably expressive in her torment, and throughout the ballet dances with the finest technique and musicality. It came as no surprise when Tamara Rojo walked on stage at the end of this performance to announce Shiori’s promotion to Lead Principal.

Following her introduction of The Corsaire in 2013, also a first for a British company, Rojo has made a success of her new setting of Raymonda. I have highlighted some narrative shortcomings and in terms of emotional intensity, this production achieves more than The Corsaire, while not rivalling ballets such as Giselle and Swan Lake. Nevertheless, I look forward to enjoying more performances in the coming years, carried through by fine choreography, both old and new, the score and sumptuous set and costume designs by Antony McDonald.