Under the directorship of Tamara Rojo, the ENB continues to introduce exciting new talent to the London stage. The latest is the partnership of Jurgita Dronina and Aaron Robison who made an outstanding debut in Rudolf Nureyev’s Romeo and Juliet. The plot may be known to all but the emotional charge they injected was minted in the moment. This sumptuous production has much to offer in both technical and dramatic challenges and they rose, triumphantly, to the occasion.

The opening scene is dark. The cloaked, semi-naked figures of fate, the falling cloud of blood-red silk and the atmospheric creaking of the funeral wagon make clear that death is a part of Veronese life but Romeo’s first entrance, filled with youthful promise, offers sharp relief. Romeo, the role that Nureyev wrote to complement his talents, is a huge challenge but Robison with turbo-charged elevation soared through the variations while managing to look elegant and at ease despite the batterie and ronds de jambe thrown in at every opportunity.

In the play, as in the ballet, it is Juliet who bears the heaviest burden, opposing both family and tradition. Dronina dances with crystal clarity, picture-perfect and infinitely charming. As the tragedy unfolds she finds her inner steel, determined in the face of fierce opposition. With Paris, she dances with tight, inhibited movements, with Romeo her heart bursting with love, then flees to Friar Lawrence in wild desperation, working through a full range of emotions. 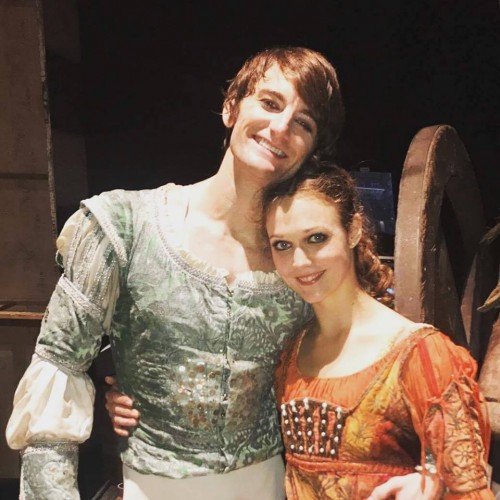 The role of Romeo prioritises the technician but when he is given the chance, Robison too, finds emotional depth. This passion is expressed potently in the moments of stillness and in one extraordinary choreographic moment when, on meeting Benvolio, (a sensitive performance from James Forbat) who tells him Juliet is dead, he throws himself in a repeated backward thrust into his friend’s arms.

Nureyev’s duets may lack the sensual fluidity of Kenneth MacMillan’s but the bedroom pas de deux, when the pair are in a maelstrom of conflicting emotions, seems to capture their desire and despair in reckless lifts and cleaving holds. This awkward realism features too in the final scenes where Dronina and Robison bring pathos to this hard-to-handle scene.

When Nureyev accepted the commission to mount a new version for the English National Ballet (then London Festival Ballet) he had already danced Romeo in other productions notably MacMillan’s 1965 production for the Royal Ballet. The many small, astute dramatic details Nureyev brings to his version are evidence of his intimate knowledge of the characters. It is Mercutio and Benvolio, rather than Romeo, who tease the nurse bearing Juliet’s precious letter. Tybalt, a forceful Fabian Reimar, plays affectionately with Juliet but the scene ends as he forcefully throws the wedding dress at her making clear she has no choice and duty is paramount. In the scene where the distraught Juliet conjures the ghosts of Tybalt and Mercutio, it is Tybalt’s ghost who suggests the dagger signifying death and honour while the phantom Mercutio suggests the potion and the possibility of future happiness.

Ken Saruhashi, a dancer of slender, elegant proportions, made a surprisingly good Mercutio. His clowning tinged with a wise, caring disposition created a three-dimensional and very sympathetic character who copes equally well with both the ballet and the swashbuckling. The fights, with weapons or fists, hurry the action along and Nureyev shows equal skill in handling numbers both in the magnificence of the court and the vibrant market place.

Élisabeth Maurin and Lionel Delanoë, from Paris Opéra, have done a great job in restaging the work while Ezio Frigerio’s designs capture the Renaissance Italy of our dreams.