After a successful Sadler’s Wells mixed bill of work created during lock-down, ENB brought a selection of classical and 21st century ballet to the South Bank. Much as I appreciate the great classics, in this latter programme it was the recent works that stood out. 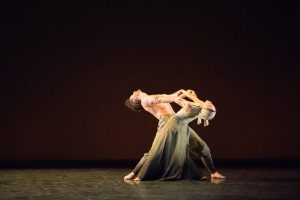 Erina Takahashi and James Streeter gave us the duet from Akram Khan’s Dust. While duets stripped of their context can lose something, this portrayal of the suffering caused by war retains all its power. Streeter is suffering from extreme PTSD and we see his head shaking and his body cowering and stretching in anguish – an illness discounted at the time. I remember my Father telling me about a silent and detached work colleague in the 1930s, “He was in the trenches.” Ordinary people knew even if doctors didn’t. Takahashi and Streeter are closely entwined for much of the 11 minute length, as she vainly attempts to alleviate his pain. At the end they separate and Streeter collapses onto his knees. Jocelyn Pook’s moving score is an arrangement featuring an old man repeatedly singing, “We’re here because we’re here,” to the tune of Auld Lang’s Syne, as sung in the trenches to express the futility of the war. The combination of movement and music is unforgettable.

The pas de deux from Annabelle Lopez Ochoa’s Broken Wings has a unique place in ballet, showing the early stages of the relationship between Frida Kahlo and a decidedly overweight Diego Rivera. Katja Khaniukova is full of life and energy circling and leaping on her leaden partner. The historic photos of the couple show that the depiction of Rivera is not exaggerated, but while we see his enormous belly on-stage, we get no inkling of his enormous talent. Khaniukova is a sheer delight in her joy of new love and Fabian Reimair, a fine dancer, convincingly lumbers and lurches around the stage.

Stina Quagebeur made Hollow for ENB Artists, Emily Suzuki and Victor Prigent for the 2020 ENB Emerging Dancer competition. Suzuki’s haunted portrayal of a very troubled soul and Prigent’s attentive concern brought this relationship to life. Yet again, Quagebour, still dancing in the company alongside her choreography, shows she is one of the most interesting ballet creators working in the UK today.

William Forsythe’s Playlist (Track 1 and 2) ended the programme in high style. To two contemporary pop songs by Peven Everett and Lion Bab, twelve male dancers have a ball or rather a friendly street rumble. Stretching their classical technique with a succession of grands jetees, spins and entrechats combined with homey gestures, this has to be one of the zingiest programme closers around. Online, there is an open air performance where at the end the dancers have a hip–hop style contest testing the extremes of their ballet technique. Tamara Rojo is to be congratulated for commissioning this work from Forsythe in 2016, his first for a UK company in 20 years. ENB are building on this relationship and next year perform his Blake Songs 1, one of the strongest recent, neoclassical works. 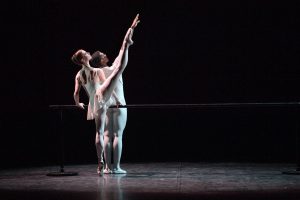 We saw one 20th Century work, the First Movement pas de deux from Three Preludes by Ben Stevenson Rachmaninoff‘s score is quietly melancholic with occasional bursts of power and Stevenson uses this in a lyrical presentation of a deep relationship facing a troubled moment. The setting is around a ballet barre, and Emma Hawes and Junor Souza are sometimes on opposite sides and at others with Hawes on top, and even sliding along in Souza’s grip. They capture the mood of the work admirably. 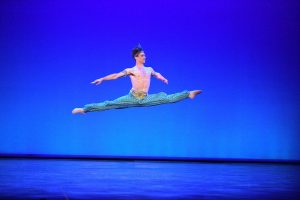 The pas de Trois from Le Corsaire is justifiably a cornerstone of Gala programmes around the world. Francesco Gabriele Frola as Ali, jumped and spun with élan, while Shiori Kase’s fouettes were remarkable, kicking off with a series of doubles and ending with a triple, all performed virtually on the spot. The extracts from Coppélia featured Jeffrey Cirio as Franz and his speed and elegance shone out. In the Jewels extract from The Sleeping Beauty, I particularly enjoyed Alison McWhinney’s variation. Alas, the Black Swan pas de deux from Swan Lake never caught fire and Natascha Mair didn’t convey the duplicitous side of her character, which is an essential ingredient.

It’s good to see the ENB dancers coming through the pandemic in fine form and in September, we can look forward to their much delayed premiere of Akram Khan’s Creature at Sadler’s Wells.