Akram Khan’s “Giselle” for English National Ballet burst onto the stage in 2016. Seeing it for the fourth time, this remarkable work just seems to get better and better. Wagner coined the term, Gesamtkunstwerk, for stage works bringing together a variety of art forms to make a whole greater than the sum of the parts and this cutting edge production does just that. The melding of Kathak, contemporary and ballet steps with a string of brilliant stage designers and an impactful score has resulted in one of the most successful new full length works to date in the 21st C.

Dramaturg, Ruth Little, has adapted the original story into a conflict between a community of migrant garment workers, the Outcasts, protesting that their factory has closed, and the owner, named the Landlord. Giselle is a forceful leader of the protestors – very different from the dreamy ingénue of the traditional story. However, the triangle between our heroine, Albrecht and Hilarion is left intact as is much of the structure of the original.

At the opening we see the Outcasts pushing against the factory wall trying to gain entry. The initial slow movements spark into dynamic life with Jeffrey Cirio as Hilarion reacting angrily to the burgeoning relationship between Tamaro Rojo’s Giselle and James Streeter’s Albrecht. With staccato moves, Cirio is like a possessed banshee. The speed, menace and power of his performance dominates these early scenes. The rest of the Outcasts take up his energy and in an exhilarating sequence they repeatedly traverse the stage using a step from Kathak, portraying a leaping gazelle. An extended duet between Rojo and Streeter exudes passion and longing with inventive lifts. 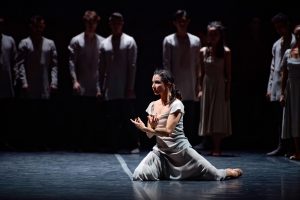 Loud foghorn blasts signify a change of mood as the wall slowly rotates to reveal shadowy figures who move very slowly to the front of the stage – their control and lack of emotion is in sharp contrast to the workers. And their costumes are extraordinary, opulent and expensive, including one woman in a dress suspended outwards from the waist by two long bone shapes. It’s then we see Hilarion in his true colours: a foreman for the Landlord as he forces the workers to bow to their previous employers. The Outcasts give up their protest in the face of elite and dance for their masters in an Indian folk dance style. Albrecht tries to hide, but is forced to acknowledge Bathilde and rejects a devastated Giselle. Finally, the Outcasts encircle Giselle and in a series of whirling, dynamic shapes lift her up and around and when they withdraw she is dead.

The second act opens with Albrecht berating his peers, his furious movement emphasising his break with this impassive group. The scene shifts to the empty factory and Stina Quagebeur, magnificently vengeful as Myrtha, dancing on pointe, a clever demarcation from all the other characters to date. She strives to bring Giselle to life and teaches her new role as a Wili. Khan arms the Wilis with long sticks and these create dramatic impact when struck on the floor or raised as a weapon. These Wilis are much more scary than the originals as they bourrée around the stage. 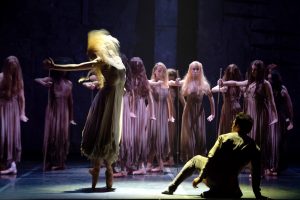 Hilarion appears, repenting his betrayal of Giselle, but she wants nothing from him and the menacing Wilis dispatch him. I have often felt sorry for the traditional Hilarion, an unfortunate who was only trying to help Giselle, but at this Hilarion’s demise I felt like cheering. Albrecht appears and we see again the forceful side of Giselle, the ex-protest leader, as she defends her love against Quagebour’s vicious attacks. A final moving duet of forgiveness shows the two leads parting forever, leaving Albrecht a broken figure, cut adrift from his previous allies. Rojo gives an emotionally charged and technically strong performance throughout and James Streeter let’s loose in his solo variations and establishes a close rapport with Rojo in their duets. 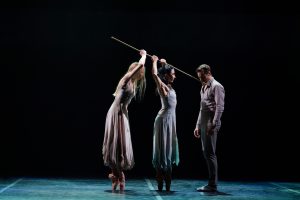 Composer, Vincenzo Lamagna, uses excerpts from Adolphe Adams’ score, repeating phrases in an effective minimalist way. Tim Yip designed the impressive set and the contrasted costumes. Mark Henderson’s lighting is always changing, creating eerie grey white settings for the Wilis. I won’t be around, but I am confident that Akram Khan’s extraordinary “Giselle” will still be performed fifty years from now.