Ballet evening – dance miniatures and Othello (29th Nov 2017) provided an intriguing mix. The first half of the evening brought to the stage duets from longer works in the rep with a selection of pieces by artists in the company, originally seen as part of a showing in the small theatre upstairs at the Opera House. The duet from Gianluca Schiavoni’s Medea opened the evening and Luana Georg and Sergei Upkin set the stage alight in the intense, passionate choreography. It whetted my appetite to see the full ballet.

Sharps and Flat by Jevgeni Grib was a great success at the earlier showing and continued to look impressive on the large stage. A distraught young woman expresses her anguish in awkward movement before a pianist appears seated at a grand piano and it is clear that she is desperate at the thought of losing him. In their duet he tries to be sympathetic perhaps remembering happy times past, but eventually he has had enough and walks off leaving the woman in despair. Marta Navasardyan gives a riveting performance as the woman and Grib is convincing as the pianist who wants out. He is a choreographer to watch for the future.

Dance miniatures closed with Triinu Leppik-Upkin’s La valse a mille temps to a song by Jacques Brel. Sergei Upkin is initially a slow motion robot, but as the music accelerates his movement speeds up, becoming more elaborate and showing his continuing technical skill. Then there is a black out, the lights come back up and the dance begins again, perhaps destined to be performed forever. As a short and distinctive audience pleaser, it’s hard to beat. 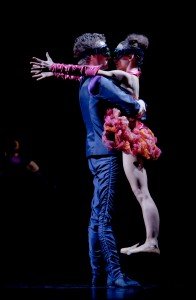 Marinas Kesler’s one act ballet Othello formed the second part of the evening and proved an intriguing update of Shakespeare’s tragedy, set in a futuristic militaristic world. Kesler stays close to the broad themes of the original play and uses Estonian composer Arvo Pärt’s music to good effect. The set by Andrea Haamer features a cylindrical frame with thin ropes hanging down, sometimes at floor level, sometimes suspended at an angle and bathed in light by Neeme Jõe. The ballet successfully conveys extreme emotions: Sergei Upkin as Iago is the personification of jealousy and anger in his solos, wrestling with himself in abrupt movement. Eve Andre-Tuga is heart breaking in the final scenes at a loss to understand her husband’s rage, while Anatoli Arhangelski as Othello is convincing in the transition from gracious Lord to his final deluded, vengeful state. As a contrast, there is a central section to Pärt’s Spiegel im Spiegel with the rope cylinder radiant in red lighting with a delicious, slow and sensuous duet – one of Kesler’s finest creations. I look forward to seeing Othello again. 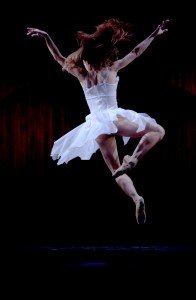 For many, ballet means The Nutcracker (3rd December 2017) at Christmas and I am always happy to see so many young Estonian girls and boys taking quiet delight at the magical happenings – the dance audience of tomorrow. Ben Stephenson’s traditional production has been in the rep for seven years now and I have reviewed it in detail elsewhere. Everything works very well with one caveat for the opening party scene: the number of guests for the original Houston Ballet production I’m sure worked fine on the larger Texas stage, but in Tallinn, fewer guests would give the ensemble scenes more shape and clarity. 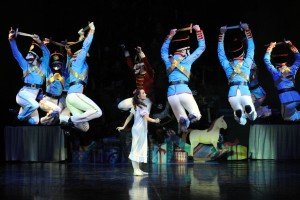 The cast of dancers for this performance provided a chance to see beyond the most familiar faces at Estonian National Ballet. First timers – Adam Ashcroft as the Nutcracker Prince and Abigail Mattox as the Snow Queen – both impressed me with their confidence in their new roles and their elegant dancing. John Rhys Halliwell brought to life bad boy Fritz and throughout my stay in Tallinn impressed with a series of smaller roles, always adding value to the steps. As always Ali Urata briefly stole the show in the Russian dance, with jumps worthy of the Guinness World Records and his sheer delight with the choreography – he told me it’s his favourite role. I’d love to see him as his namesake Ali, the slave in The Corsaire.