In the theatre and on film, I have seen several versions of Korsaar and, to confess, it’s not my favourite ballet: fine choreography, but weak narrative and lack of emotional content. Thus, I was delighted that José Carlos Martinez has reorganised and focused the work to help overcome these shortcomings: this version has two acts rather than three; there is a tighter focus on the relationship between Conrad and Medora; dance sections are moved around with a positive effect. 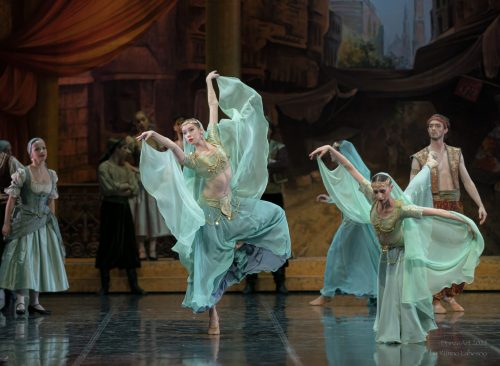 The company was plagued by injury in the rehearsal period, but this gave great opportunities for some of the young male dancers. In a colourful, dynamic opening street scene, all the major characters are introduced, including Conrad, the pirate, played by Joel Calstar-Fisher. Lankendem, presents his slave girls to the Pasha and they dance in silky costumes, bending, twisting and floating in a sensuous manner, but to no avail, despite their entreaties to the ruler. Another aspect of this revision is the Pasha, normally seen as a lecherous, fat buffoon. Here, Martinez has the Pasha portrayed as a handsome, restrained character. Thus, it’s understandable that the slave girls in the opening scene are keen to be with this attractive, wealthy ruler.

Lankendem then introduces Gulnare and the two embark on a grand pas. Finn Adams, from the corps de ballet, played the slave dealer and in his variation provided impressive tours en l’air and then fine partnership skills. As the run continues, I expect he will express the dark side of his character more forcefully. As Gulnare, Akane Ichii displayed strong technique and supple poise throughout. I particularly enjoyed her Italian fouettes, combining high kicks with controlled spins. 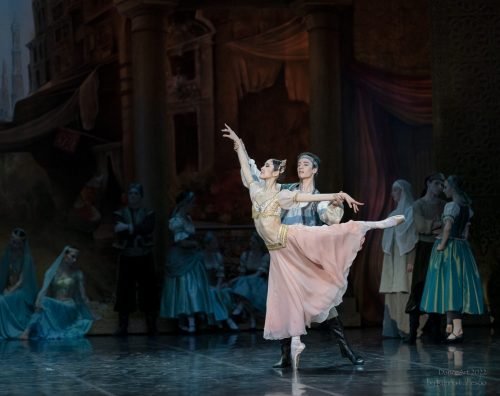 Medora, played by Ami Morita, is brought on by Lankendem and although the Pasha is impressed, she only has eyes for Conrad. Morita is graceful and clearly expresses love at first sight for the pirate, but Lankendem seals the deal with the Pasha for Medora. Conrad and his pirates attack his retinue and make off to their secret cave, where we see a delightful, slow “getting to know you” pas de deux for Medora and Conrad, full of beautiful lifts. Then it’s the turn of the pirate troop and their girls to strut their stuff with dances full of energy and “don’t give a damn” confidence.

Now comes a turning point in the narrative, as Medora persuades Conrad to release the slave girls. Birbanto, Conrad’s deputy, is appalled and a fight ensues with Conrad reasserting his authority and releasing the girls. A furious, scheming Birbanto drugs Conrad and prepares to kill him. Medora intervenes and delays matters until Conrad awakes and again takes charge. But Medora has been sold to Lankendem by Birbanto. Throughout these scenes, Francesco Piccinin as Birbanto is excellent, with fast footwork, explosive movement and fine acting as the mutinous deputy. 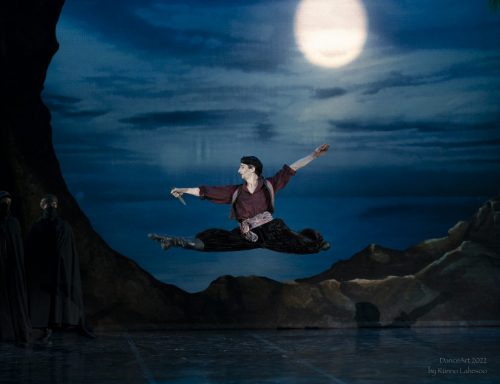 Act 2 opens in the Pasha’s palace, as Medora is brought back. Gulnare has a short pas de deux with the Pasha and Ichii shows that she also has a talent for humour. We see the Odalisque trio, moved from its usual position in Act 1. Nanae Maruyama, Jordan London and Laura Maya all do credit to Petipa’s choreography, despite baggy trousers. Throughout the scene, Daniel Kirspuu has fun in the role of the bumbling Eunuch.

The Pasha reclines and dreams of an Enchanted Garden filled with beautiful dancers – I wish my dreams were as good. This provides a setting for ensemble of sixteen forming a range of eye-catching patterns, together with variations for Gulnare and Medora. Morita is accomplished in grands jetes and pirouettes. The Pasha wakes as the pirates return and they make off with much loot and Conrad is reunited with Medora. 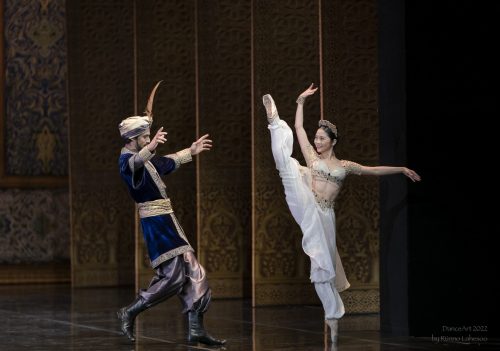 We return to the hidden cave, where Birbanto’s treachery is exposed and he is driven from the band. Now comes the famous Korsaar trio with the two leads and Ali, Conrad’s loyal servant. Martinez has moved this trio from Act 1 and, as it contains some of the most spectacular dance in this or any other ballet, it makes sense to place it towards the end. After an elegant trio, we have Ali’s variation. Leonardo Celegato only joined the company in 2021, but is clearly making his mark. The solo opens with a series of double saut de basques, high jumps with a double spin and both legs drawn up, and the fireworks continue with barrel jumps and fast spins around the stage. Celegato fully deserved the tumultuous applause. I also enjoyed Calstar-Fisher’s variation with huge kicking jumps and high spins, all performed with fine musicality. In the trio finale, Morita completed complex, multiple fouettes and at the end the applause rang up to the rafters. 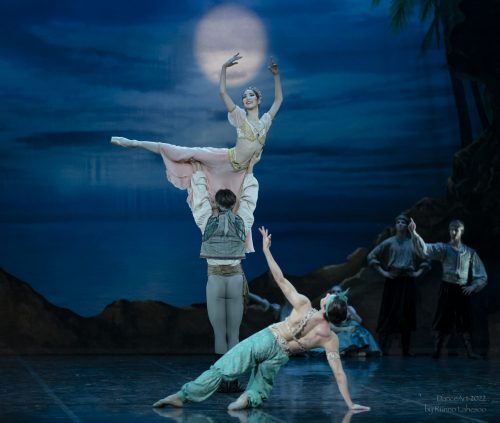 The pirates set sail and Taavi Varm’s digital video vividly depicts a square rigger foundering in stormy waters. A final scene sees the two leads as the only survivors. They perform a slow pas de deux with high lifts expressing their love and gratitude to be alive. In a pre-perfomance talk, Calstar-Fisher commented that this was his favourite part of the ballet.

Iñaki Cobos’s sets are primarily rich, middle-eastern backdrops, leaving as much space as possible for dance on the small opera house stage. The score perhaps sets a new record with no less than four composers credited. Martinez has created a new vision of Korsaar, breathing life into a ballet with severe limitations in earlier versions. I was able to watch some rehearsals and with his illustrious assistant, Agnes Letestu, Martinez clearly developed an excellent working relationship with the company. One ballet staff member told me the duo were the best visiting team in twenty years. And to crown it all, late in his Tallinn stay, Martinez was appointed Artistic Director of Paris Opera Ballet, one of the top jobs in the field.