Tragic ballets, such as Swan Lake and Giselle have an emotional resonance which make a deeper impression than ballets such as The Corsaire or Don Q, despite their brilliant solos and pas de deux. So, it is always interesting to see a new production of the tragedy, La Bayadère. However, this ballet is sometimes seen as problematic and I shall discuss this aspect later.

To my surprise, Toomas Edur’s staging in two acts lasts just over two hours, much shorter than the current Royal Ballet’s Makarova version or the even longer Paris Opera Ballet’s Nureyev production. However, by focusing on the principal characters and presenting a selection of the wedding celebration dances, Edur’s aim was to create a more manageable work with enhanced emotional clout – the plot doesn’t put its feet up for forty minutes.Nevertheless the authenticity of the original remains of primary importance and Edur credits his Assistant, Jevgeni Neff from the Mariinsky, with ensuring fidelity to Petipa’s nuances.

For those unfamiliar with the ballet, at the opening, we see the beautiful temple dancer, Nikiya, and the warrior, Solor, swearing their eternal love, while the High Brahmin, also in love with her, looks on in dismay. But the Rajah’s daughter, Gamzatti has chosen Solor and he is forced to marry her. To be sure of no competition, Gamzatti has Nikiya poisoned by snake bite. The High Brahmin offers Nikiya an antidote, but she refuses rather than face life without Solor. The second act sees a distraught Solor falling into a drugged sleep, reuniting with Nikiya’s ghost and eventually joining his loved one in death. 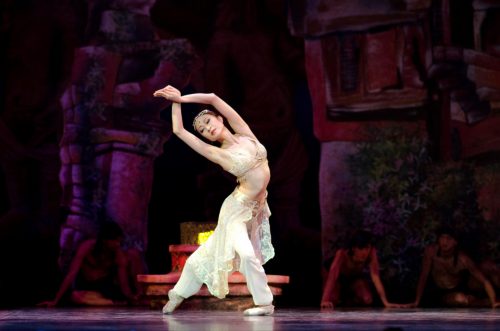 Nanae Marayama is perfection as Nikiya, bringing strong technique and beautiful line to the role. Her elegant, soft arms enhance the portrayal of her deep love for Solor. Marayama has always been at home in emotionally charged roles and here she is in her element. Sergei Upkin can always be relied upon for an expressive performance with strong character development. I’ve enjoyed his performances for twenty years and he joked with me about his age and his plan to retire in a couple of years. However, his grands jetés and tours en l’air show he remains a master of his art. Their duets together in the first and second acts generate powerful chemistry, enhanced in the intimacy of the bijou Estonia Opera House. 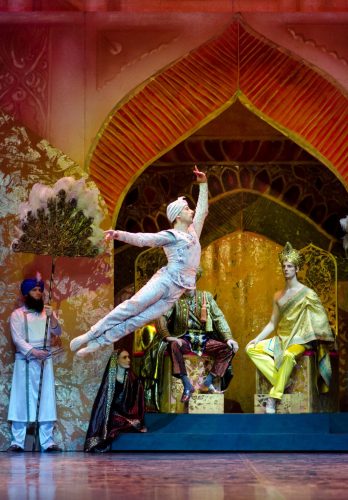 The confrontation where Gamzatti, Laura Maya, tries to bribe Nikiya evokes strong emotions and Maya convincingly depicts her character as both murderous and spiteful, but finally devastated at Solor’s death. In the wedding scene, Leonardo Celegato, is a powerful Golden Idol admirably performing the intricate choreography. In the rapid dance of the Hindus, Jevgeni Grib vibrantly attacks his short role and Darja Günter matches his élan. As the Rajah, Vitali Nikolajev, performs to his usual high standard in character roles.

The second act, with Solor in a drugged sleep, has one of the most famous scenes in ballet, the entrance of the shades with repeated arabesques. The Estonian dancers showed great precision and elegance, especially as the narrow stage means that the sloping ramps are steeper than usual, increasing the difficulty of the steps. The leads continued their charged partnership with Upkin mortified by his abandonment of his love and Maruyama showing wistful forgiveness. In the third shades variation, Ami Morita performed the difficult, slow choreography with fine phrasing and confidence. 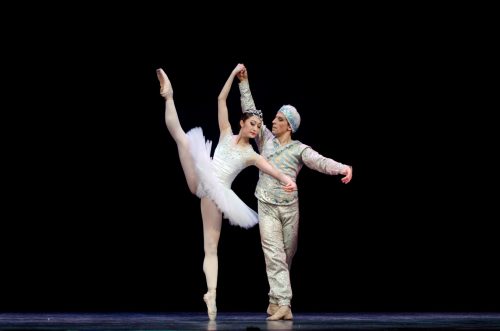 Peter Docherty’s sets are beautiful, and in the programme notes he takes the opportunity to praise the talented artists and crafts people of the Opera House. The orchestra under Laura Sirp impressed in the score by Ludwig Minkus.

As I wrote at the start, La Bayadère is sometimes seen as problematic for its depiction of Hindu traditions. Rajan Zed, an American Hindu leader, complained to the Estonian Ministry of Culture about the “blatant belittling of a rich civilisation.” He even suggested the Ministry should reconsider its support for the Opera House, a proposal they dismissed, saying that they would not “interfere in any way with the artistic choices of any art institution in Estonia.” Zed no doubt made his complaints without having seen the Estonian La Bayadère.

When I last saw the Royal Ballet’s production, the partial “blacking up” of the fakirs in the opening scenes did make me uncomfortable, so I appreciated that this doesn’t occur in Edur’s version. Overall, there are a mix of characters both positive and negative and while the dance bears little relation to Indian forms, the great beauty on display presents a positive image of the culture.

However, I do not go to La Bayadère to learn about Indian history. Similarly, if I want an accurate depiction of 18th C. wine growers on the Rhine, I don’t go to Giselle, nor to Romeo and Juliet to learn about Italian aristocratic society. Rather, I go to see great art illuminating dramatic relationships. Thus, I do not see the Estonia production of La Bayadère as problematic and look forward to future performances of this fine realisation of a most significant example of ballet history.