Estonian National Ballet’s new double bill featured Toomas Edur’s Silent Monologues with Sir Kenneth MacMillan’s hour long Song of the Earth, set to Mahler’s eponymous song cycle. Following Manon a few years ago, Song of the Earth represents another feather in the company’s cap, as licences from the MacMillan Trust are hard to come by.

Mahler based his song-cycle on Chinese poems of the eighth century T’ang dynasty, freely translated into German. It was not until 1965 that MacMillan was able to create with Stuttgart Ballet his long cherished ballet based on the score, after two requests to the Royal Ballet board n London had been rejected. His close friend, Stuttgart Artistic Director John Cranko, whose fine Onegin is also in the Estonian repertory, gave him his choice of dancers and as much rehearsal time as he needed. After generally very positive reviews from both German and British critics, the Royal Ballet Board gave in and Song of the Earth had its London premiere in 1966 and has been regularly revived in London since then. 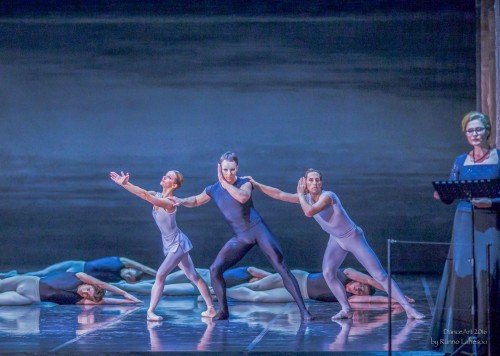 MacMillan described the theme of his ballet: ‘A man and a woman; death takes the man; they both return to her and at the end of the ballet, we find that in death there is the promise of renewal.’ The man opens the ballet with jetées to exhilerating music and is soon joined by an enigmatic figure in a half mask, Der Ewige – the Eternal One. In the English translation he is called the Messenger of Death, which lends him a more sinister aspect. He appears in each scene and often dances in unison with the other characters, suggesting that he is a natural part of existence. This representation is in stark contrast to most portrayals, such as in Kurt Jooss’s The Green Table, where Death makes heavy, powerful steps and gestures to loud, menacing music.

The Woman is introduced in the second song and is a figure apart. The words of the poem reveal her apprehension of death and her longing for a companion to end her loneliness. Through the three central songs, Youth, Beauty and The Drunkard in Spring we see a group of young people oblivious to their mortality, living for the moment and the Estonian dancers impressed with performnces of MacMillan’s difficult, off kilter steps, especially Nanae Maruyama and Enoko Amoros. 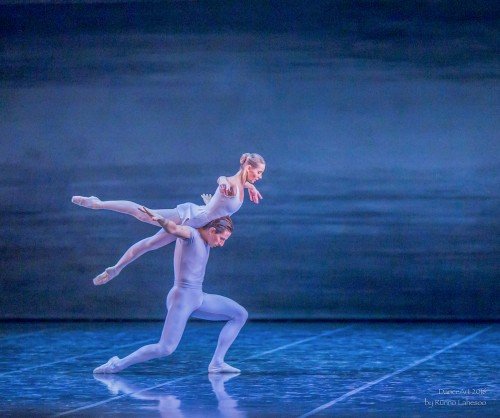 In the final song, at 30 minutes lasting almost half the length of the entire song cycle, the woman finds the man in an extended duet, only for the Eternal One to intervene and claim her partner. Alone, the bereft woman dances a solo expressing an acceptance of her loss, the return of her loneliness and the inevitability of death. Rejoined briefly by her young companions, she wanders among them, more isolated then ever. Her solo ends with a lengthy, demanding sequence of pas de bourées, as if driven by forces beyond her control. The man returns, now also in a half mask symbolising death, followed by the Eternal One. They link hands with the woman and walk to the back of the stage where for over a minute they take large, slow paces in a line towards the front of the stage, symbolising eternity together to gentle, exquisite music, making a memorable ending.

As The Man, Sergei Upkin, was on top form, dancing with great authority and pulling off difficult barrel jumps with ease. He portrayed the joys and anguish of his character with the expressiveness we have come to expect from him. Oliver Jahelka as The Eternal One danced with the power appropriate for an entity whose final triumph is assured. But it is Luana Georg as The Woman who is at the core of this ballet. The distress, love, heart break and final acceptance are all portrayed convincingly. In the intimacy of Estonia’s bijoux opera house, her performance moved me more than any I can remember in the role.

It is a shame that there were only two performances, with scheduling difficulties for the orchestra given as a weak excuse for the dancers and audiences not to have further opportunities to savour this outstanding work. 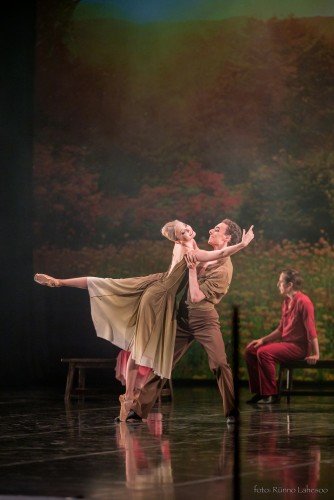 The evening opened with Toomas Edur’s Silent Monologues, originally created for English National Ballet for the final performances with the company of Agnes Oakes (now Age Oks once more) and himself. In a one-off event the performances took place in St. Paul’s Cathedral and Edur took the opportunity to introduce London audiences to five Estonian composers in addition to Arvo Pärt, the Estonian whose music is used so widely in dance today. Silent Monologues is for three couples and explores the joys and strains arising in relationships. After an opening pas de six, we see a series of duets. Ketlin Oja and Zacharay Roberts are delightful as a young couple in thrall to their sweet love, but in the fourth duet they return in anger and conflict, a leap I found a little jarring without a middle story and an understanding of the reasons.

The second duet brings Marika Muiste and Jevgreni Grib as two people struggling to find the balance points essential for a relationship. Grib’s eager urgency finds Muiste in agonised uncertainty, for a time it looks as though Grib may have convinced her, but in the end it is to no avail. The dancers use the choreography to bring out their anguish movingly. In the third duet, Alena Shkatula and Denis Klimuk are a couple furious with eachother as they storm around the stage, eventually bringing Klimuk to violence. A second section shows them overcoming their differences in a passionate duet, but eventually seperating again. Shkatula and Klimuk put everything they have into this tortured relationship. At the end the three couples are still, exhausted by the disappointment of lost love. Toomas Edur has created an intriguing ballet exploring longing and heartbreak.