To make a ballet from Tennessee Williams famous play and film, Ashley Page, then the Director of Scottish Ballet, took a gamble. He chose choreographer, Annabelle Lopez Ochoa, little known in the UK at that stage and, recognising the theatricality of the original, commissioned theatre director, Nancy Meckler, to work alongside her in an unusual collaboration for the ballet world. The bet paid off big time with critical acclaim, awards and audiences in rapture. It’s worth remembering that the central role of Blanche was created on Eve Mutso, the remarkable Estonian dancer who proved a charismatic choice. Created in 2012, the ballet remains in high demand around the world, so it was a feather in Toomas Edur’s cap that he was able to secure it for Estonian National Ballet. 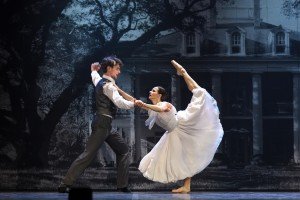 The ballet recounts the narrative in the clearest terms, greatly assisted by Niki Turner’s designs. Whereas Williams opens in mid-story, Lopez Ochoa and Meckler opt to begin with the back story providing a firm basis for Blanche’s decline. Her tragic marriage, ending in the suicide of her bi-sexual husband and the decline of her family’s fortunes are brought to vivid life by Jevgeni Grib, superb as the husband, bringing emotional power and beauty to Lopez Ochoa’s choreography. Turner provides a striking image of the family estate on a series of blocks which collapse when the home is lost.

Blanche finds herself living in a hotel, drinking and having a series of unsatisfactory affairs. In the lead role, Luana Georg conveys Blanche’s troubled nature combing desire with confusion. Eventually she flees to her sister, Stella, in New Orleans to live with her and husband, the wild and sexy Stanley. But her troubles are just starting and the triangle of Blanche, Stella and Stanley is fundamentally unstable. The minimalist stage conveys the paucity of Blanche’s new surroundings and her past continues to haunt her with images from the past materialising during drunken scenes. 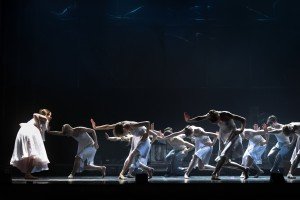 While Stella loves her sister, in the choice between Blanche and Stanley, the latter, father of the child she is expecting, must be favoured. As Stella, Marta Navasardyan personifies her sensual nature in a searing reconciliation duet with Stanley. In Blanche’s attempt at a relationship with Mitch, Stanley’s good natured friend, she takes on the persona of a virtuous woman, but her dream is destroyed when a letter to Stanley uncovers Blanche’s many affairs and Stanley shares the news with Mitch. Sergei Upkin is a fine actor dancer and makes Mitch into a believably decent character, exploding into anger when the deception is revealed. 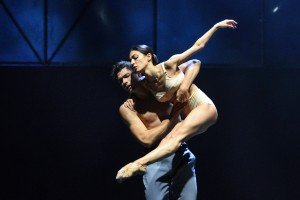 In the tragic final scenes – Stanley’s rape of Blanche, her complete mental breakdown and transfer to an asylum – the harrowing story is brought to vivid life by the ensemble. It is here that Luana Georg is at her best, conveying the loss of all hope and her grip on reality. Throughout it’s a most demanding role and Georg again shows the wide range of her abilities from classical to contemporary ballet theatre. As Stanley, Anatoli Arhangelski is convincing as the hateful figure of the final scenes, but perhaps needs to provide more clues to his nature in the early scenes. Lopez Ochoa has a strong visual sense and in the finale Blanche’s crazed memory takes a single flower seller from an earlier scene and fills the stage with cloned flower sellers.

The music and sound by Peter Salem underscore the action and Lopez Ochoa’s enthralling mix of ballet and contemporary dance, provides a rich example of Gesamtkunstwerk – total theatre. At the end, the audience rewarded the performers with a standing ovation, a rare event in Tallinn.