Louis XIV was extraordinary: King of France from 1643 until his death in 1715, his reign is the longest recorded of any in history. An absolute monarch, a masterful manipulator and empire builder, a lover of women and war, by the end of his reign he had nearly bankrupted France and left a section of the population destitute.

Most relevant for us, Louis kick-started the movement that resulted in the ballet we enjoy today, including the foundation of the dance academy that became the Paris Opera Ballet School. Louis loved to dance and expected his court to follow his example. The most famous image of Louis is from Ballet de la Nuit, lasting 13 hours apparently, with the 14-year old Louis appearing at the end as the Sun.

Teet Kask is not the first choreographer to be fascinated by the Sun King. David Bintley made a TV programme celebrating Louis and created The King Dances a few years ago in homage to his life long hero. Whereas Bintley focused on the early part of Louis’s reign and Ballet de la Nuit Kask’s ballet follow his history from a boy to his death. While I enjoyed sections of Louis XIV – the Sun King, there are problems with the production. 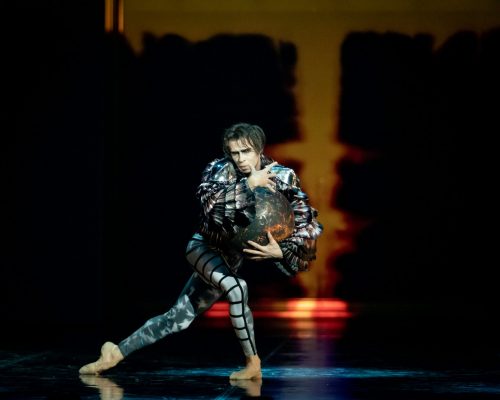 In brief, we see the death of his father; the entry of Louis to the court as the Sun God; scenes showing his power over his ministers; his wedding and several of his many amorous affairs which provide the main focus of the ballet; his love of war even when his younger brother dies and finally his own death. Overall, the company looked in very good shape across both major and minor roles. The best elements are the choreographies created by Kask for the leading characters. I saw two casts and the ultimate combination would probably be a mix of the two.

Jevgeni Grib plays the role of Death, never far from the action. It’s easy for us to forget the ever present risk of death for people of this era. Grib takes this role and brings sensuous, sinister energy to the movement, lighting up the stage whenever he appears. The central role of Louis is played in contrasting style by the two dancers I saw. 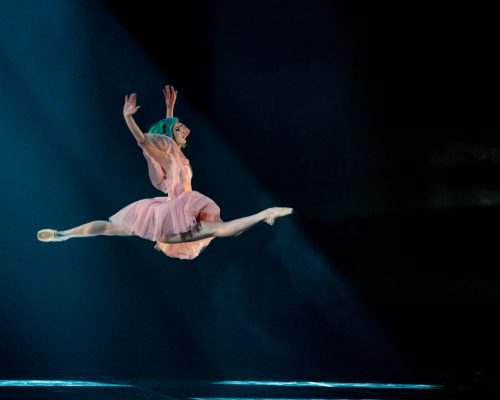 Laura Maya as the Girl in Pink
Picture: Jack Devant

Ali Urata is renowned for his grand jeté but here we see a different aspect of his art as he brings an elegance befitting a dance loving King, including supple baroque pas de bras. His many passions are believable and his anguish at the death of his loves. From this cast, The Girl in Pink, the lover we see most often, is danced by Laura Maya who brings vivacious spirit to the role, making it easy to see why the King falls for her.

From the opening night cast, William Newton plays Louis convincingly with huge jumps showing power to the fore – this is a King you cross at your peril. Nanae Maruyama plays The Girl in Pink and her heart breaking performance in the second half, when Louis tires of her, is a highlight. John Halliwell as the Kappelmeister brings an elegant, precise performance ensuring we believe he is the court dance master. On both evenings, it was these performances that held the production together for me. 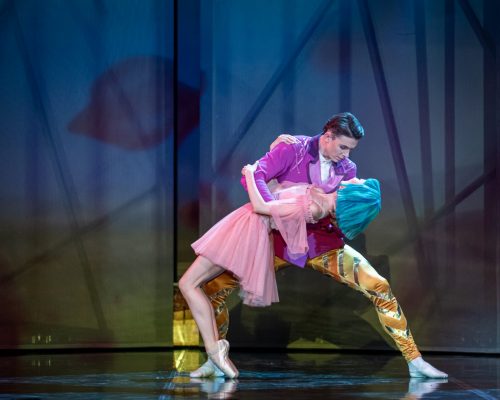 Nanae Maruyama as The Girl in Pink and William Newton as Louis XIV
Photo: Jack Devant

Other aspects of Louis XIV – the Sun King are less convincing. The work does feel overlong, particularly the first half. Perhaps a tighter focus on one part of his life would have worked better. Teet Kask’s ensemble choreography does not function as well as his solos and duets. His steps for the soldiers are pedestrian and the court sections uninspiring. The costumes by Kristian Steinberg are puzzling and distracting. While I accept that they don’t have to reflect the Baroque period, the Girl in Pink has to suffer with a bright green wig, the young Louis wears a hoodie and courtiers appear in boiler suits –difficult to comprehend or appreciate. The projected images by Taavi Varm are captivating, but I sometimes had difficulty linking them to the on-stage action.

So, Louis XIV – the Sun King is not without faults but I will remember with pleasure several of the performances.