Tiit Härm’s love for the music of Gustav Mahler formed the inspiration for his new ballet Twilight Houses, an adaptation of the short novel, Twilight, by Eduard von Keyserling, who wrote from his own experiences of German Baltic nobility at a time of their waning power. Härm has used classical ballet to create a tragic drama illustrating passion, love and loss. 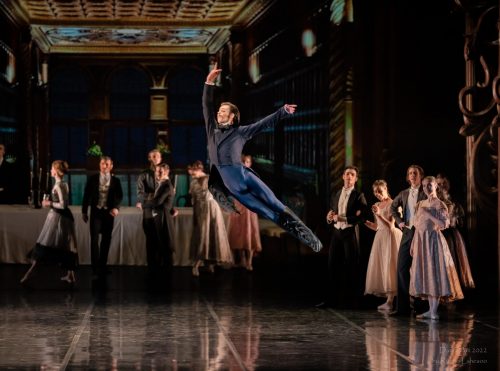 The first act introduces us to the characters and their comfortable life style, following traditional ways. Jevgeni Grib as Baron Dietz is the central figure and we see a confident, outgoing personality, brought to life in Härm’s choreography and by Grib’s vital portrayal. Anna Roberta’s Lydia and Andrea Fabbri’s Dachhausen, are a married couple in another Baronial hall. He is full of love for his wife and oblivious to the attraction between Lydia and Dietz, who illustrate their secret relationship with powerful lifts and spins.

The young Baroness Fastrade, played by Ketlin Oja, returns home after a long period away and Dietz is immediately smitten when they meet at a countryside gathering. Then, at a banquet held by the Fastrade’s father for local dignitaries, Dietz proposes to Fastrade and is accepted. Härm uses the gathering and the banquet for ensemble choreography with swirling patterns, conveying a relaxed, contented society. 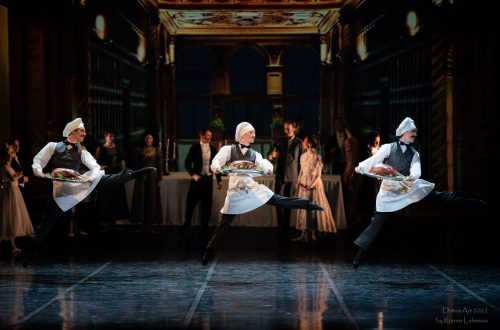 Härm has some fun at the banquet with three boy chefs skipping around the stage with meat dishes held in both hands and sometimes over their heads. At the end of the first act, Fastrade and Lydia enjoy a duet proclaiming their love with snow drops falling on a moonlit night. With lifts high over his head and frequent kisses, Grib and Oja generate much convincing chemistry.

The second act opens in a bar with two tables. From the first, a group of six boozy men stagger away from the table, but then, rather surprisingly, perform double tours en l’air – I’ll have whatever they’re drinking. Lauren Janeway takes delight in her role as a gypsy fortune teller with high kicks and grand jetés. At the second table, Dietz is playing cards, but is persuaded to have his palm read by the Gypsy. She foretells of doomed love and Dietz waves her away dismissively. 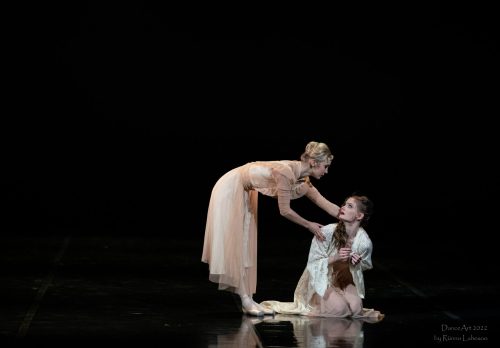 The action moves to Fastrade’s chamber where she is admiring her wedding dress. To her surprise, Dietz enters, but his advances are unwelcome – he shrugs and leaves. After a brief return to the bar, he visits a bored Lydia. Härm conjures up a most sensual duet that Grib and Roberta perform with fiercely, passionate dance involving extreme lifts and demanding strong technique. After a couple of hesitant moments, she gives herself to him, only to be discovered in flagrante by her husband. Exploding with rage, Fabbri’s immaculate jumps, spins and gesticulations blare out his anger. By chance, Fastrade and the fleeing Lydia meet and in an emotional scene, Lydia confesses and is consoled by Fastrade.

From here, tragedy takes centre stage as Dietz kills Dachhausen in a duel. Fastrade consoles Dietz but then gives back his ring, and devastated, he commits suicide. In a deeply melancholy final scene, Fastrade is in black, burdened with guilt, is partnered by a ghostly, almost still Dietz, conjured from her memory.

Härm employs dance to describe the various tortured relationships with great skill. The set, employing curly wooden frameworks, and the period costumes, both by Maarju Meera, are gorgeous. Tiit Härm and Estonian National Ballet have another success.