There is a murmur among dance writers and followers and trending among ballet companies about how ballet companies are in danger of becoming the “Ballet Company of Anywhere” and that companies are losing their uniqueness. By this I mean not just in title but importantly in repertory. It seems like when Ballet Company X chooses a particular ballet or choreographer for an upcoming season, so does everyone else — jumping on the bandwagon. I’m sure this is often coincidence but it can come across as collusion.

No such danger if you travel a few hours south from Seattle to enjoy Eugene Ballet, where the bulk of the choreography is by Artistic Director Toni Pimble. English by birth and education, and informed by her years performing with German dance companies, her specialty and strength is in making original story ballets or lending a fresh ear and eye to establish ones, such as The Nutcracker. 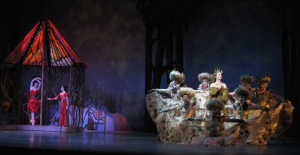 I happily enjoyed Eugene Ballet’s production of the world premiere of Pimble’s latest creation, The Snow Queen. Over two years in the making and set to a newly commissioned score by Portland composer Kenji Bunch, with costume design by Jonna Hayden and set design by Nadya Geras-Carson, this ballet was a huge, and very local, successful undertaking. Over 150 people were involved in bringing it to fruition, beginning with a ballet “angel,” the late Richard Haugland, who generously gave $500K that allowed Eugene Ballet to own its building outright and who asked Pimble to create another full-length original ballet, after having first given funds for her to create Mowgli — The Jungle Book Ballet in 2013. At a pre-show talk, I got to hear Pimble, Bunch, conductor Brian McWhorter, and Hayden talk about their creative process, aided by a slide show. Bunch made a great comment, observing that some of the hardest challenges, like making music for a full-length ballet, are also the most rewarding.

In eight scenes, The Snow Queen shows how the eponymous and icy character stealthfully takes a young male villager back to her ice palace, and how his girlfriend, Gerda, travels to rescue and save him — which she does. 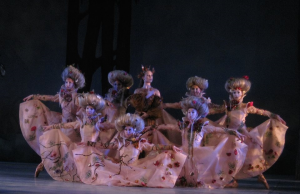 Making use of projections as well as traditional, physical sets and amazing puppetry, Gerda flies upon the back of a crow, encounters a corps de ballet of flowers (brilliantly costumed and coifed), a Rose, Gypsies, a prince and princesses, reindeer and others who help her along her way. When she finally does arrive at the queen’s ice palace, she finds her boyfriend, Kay, nearly completely frozen; her weeping brushes him with her warm tears, thus reviving him, allowing the couple to be reunited.

While telling the story very well, I found Act I a bit long on exposition, but the ballet came into its own especially with Act II’s good pacing, rhythm and flow, which was tight and moved along nicely. 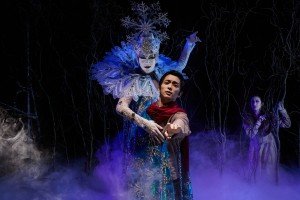 Danielle Tolmie was appropriately stately, distant, and cool as the Queen of the Frozen North, with Pimble’s choreography allowing her to show off her length, balances, and extension.

As Kay, Hirofumi Kitazume had power in his dancing, shown especially at the end with an extended solo — sauté fouetté into cabrioles back, good pirouettes, and he was a sympathetic partner to his Gerda, the lovely Yuki Beppu. Beppu infused great acting and feeling into her dancing. Her character required a dancer who could sustain an entire full-length ballet. As I recall, she was in all scenes, so her role required the right kind of stamina, too.

The “Crows” were fun, well-conceived, and entertainingly characterized in the choreography — sharp fluttery moves, twitters, short quick jumps, and occasional big leaps that revealed both the curiosity of these smart birds and also how they helped convey Gerda along her journey to find and rescue Kay. 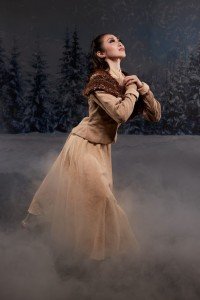 The penultimate scene had Gerda — whose transport crow had been shot down by Gypsies, observe these very men and women let loose with wild and spectacular steps and enchainments, the men in particular getting to show off with fast footwork, the slapping of hands on legs and feet, and flights through the air. The women responded with big allegro exciting movement, but perhaps not quite as technically impressive as their bare-chested counterparts.

Accompanied by OrchestraNEXT, conducted by Music Director Brian McWhorter, The Snow Queen is an excellent new creation and one that I hope Eugene Ballet brings back, and if the audience’s reaction is any indication, this cannot be too soon.