There are times when one wants to get lost in the anonymity of being in a crowd, when one longs for the communal experience of witnessing theater as part of a large audience — clapping when everyone else claps, sighing when they sigh, feeling the warmth of joint appreciation. The latest production I saw at Dance Place in Washington, DC, catered to an altogether different desire — the fantasy of being the sole person for whom performers deliver their craft. However, rather than an occasional musing, wondering what it might be like to be alone in the theater, with those on stage dancing just for you, this was the reality of the evening. Each vignette of seven presented was performed for one person at a time. This certainly brought something unique to dance viewing, and it changed the lens through which I watched the artists speak and move.

A small group of audience members, accompanied briefly by guides to usher the guests to the next performance spot, traipsed in and around the Dance Place building. At each stop along the way, there was a short performance dedicated to a single audience member. The audience members rotated, visiting each performance in a different order, and took turns viewing. This was timed pretty well, such that I remained mostly unaware of other audience members coming and going ahead of and behind me. I very much had the sensation that the performances were just for me, and I enjoyed that. 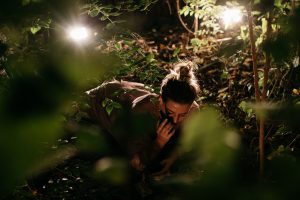 I began outdoors. Standing in isolation, I stared at a woman in an upper window of Dance Place. With a walkie-talkie that was handed to me glued to my ear, I watched her sway to oral stories about childhood paper dolls. Subsequently, at the back of the building, another female dancer swirled among the bushes, eerily lit. The crunch of leaves and ground beneath her supplied some music, as the did the Metro train that whirred by later. (This piece, called Stay Path, or Late Night II, choreographed by Hayley Cutler, was performed by Carolyn Hoehner and Kristen Yeung).

From outside, I was guided inside to the basement, where I was shown a chair in a dark room, and I was given night vision goggles. In the rather obviously named Night Vision, choreographed and performed by Shannon Quinn and Boris Willis, a couple slowly maneuvered toward each other. It took me a minute to locate both dancers in the pitch black space. They weren’t wearing night vision goggles, so they were truly dancing in the dark. Did they sense distance through breath, counting, textures on the floor?  At one point, the pair came rushing toward me, which induced a little bit of panic, as I understood that I could see them, but they couldn’t see me. Thankfully, they stopped just short of me, and the slight flight was actually quite amusing. 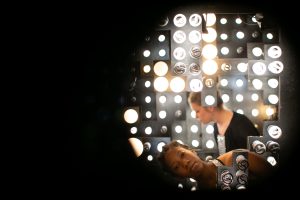 Then, moving backstage, there was Filament, choreographed by Sadie Leigh, and performed by an alternating cast of dancers including Alyssa George, Anastasia Johnson, Dylan Lambert, Kaitlin Pennington, Robin Rodbell, and Stephanie Stoumbelis. I was directed to peep through a small hole in a wall, behind which was an utterly magical world of blinking lights (engineered by Jeffrey Dorfman and Melanie Nehrkorn and technology programmed by Andrew Pendleton). I wanted to rub my eyes in disbelief. A dancer floated between panels of lights, and then another dancer, and then another, in mind-blowing mirror-like layers. The lights, exquisitely timed, flashed and erupted, reminding me of a pinball game. This was one of the moments when I regretted having an escort come to retrieve me. I wasn’t ready to break away, but in order for everyone in the wandering audience to have a turn, I had to move along.

In an upstairs studio I witnessed Bifocal, performed by Amanda Blythe, and choreographed by Blythe and Erica Rebollar. I was led to a pile of pillows on which to relax, so I leaned back and took in a clever duet. Wearing 3-D glasses that I was handed, my attention turned to Blythe in the flesh and her avatar. The two playfully and intriguingly twinned. Sometimes the projection of the dancer went in the opposite direction of Blythe herself, and sometimes the projection moved forward toward her. Sometimes the movements were identical, and sometimes the timing varied, so that a head swivel from one would result in a different reaction from the other. 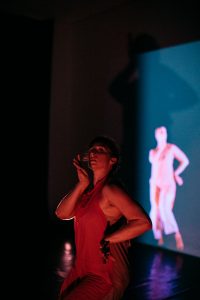 Next, in a curtained office space, I sat in a chair at a small round table across from Ashely Shey. This work, titled Slow Dance or Rock Out, choreographed by performance artist Holly Bass, involved a series of questions to prompt dialogue (name a yummy food, where in the world would I want to travel, what one thing would I change about myself) followed by a game during which each person chose which side of a card to flip up, the side saying “Slow Dance” or the side saying “Rock Out.” If both people seated at the table chose “Slow Dance,” then a slow dance between the two would commence. But if the cards didn’t match, or both cards said, “Rock Out,” then Shey would rock out, and the patron had the choice to join in rocking out or stay put. I got to slow dance, not as awkwardly as you might imagine with someone I’d known for a matter of minutes, but our dance lasted only a few seconds before being interrupted. It was time to move on again.

After that performance, as I was getting up to leave, I noticed that seat I had been sitting in had the name of Alan “Mike” Kriegsman, a long time dance critic at the Washington Post, on a nameplate affixed to one of the armrests. Was this a coincidence, or was the particular seat named for the beloved local dance critic selected on purpose for the sole audience member? 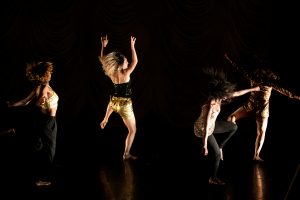 Last but not least, I entered a closet, in which I was surprised to find Hayley Cutler, topless, standing beside a table full of paper plates with individual slices of white sheet cake on them. The guide explained to me that I should choose a piece of cake and that I had four minutes to eat it, or not, before disposing of it in a large garbage bin. I hesitated and took only a few bites of the cake, mainly because I simply wasn’t very hungry. The cake was perfectly tasty, though. Cutler read aloud from Betty Friedan’s The Feminine Mystique, the book somewhat shielding her breasts, as I nibbled at the cake. What was this work choreographed by Cutler and given the name fond forced again meant to highlight? I don’t know. But I do know it was a bold move by Cutler, and I was less uncomfortable eating cake in a closet with a half naked stranger than I would’ve previously guessed.

Overall, traveling as an audience member and being treated to separate performances for me alone was interesting. The breadth of ideas was impressive, and yet there were plenty of common ties. Voyeurism was one strong element that united the diverse short works. I appreciated the self-consciousness of being the sole audience member and observed how this increased awareness altered and generally intensified my gaze. I also luxuriated in the rare experience of receiving a performance alone. Thanks to producing director and set designer Ben Levine, associate producer Ava Delasanta, projections designer Mark Costello, sound designer Stephen Johnson III, sound and video supervisor Alexander Roberts, costume designer Claire Alrich, stage manager Faryn Kelly, and assistant stage manager Sarah Chapin for combining their talents to make a memorable performance that extended beyond a slick idea and actually melded into a worthwhile whole.