September 23 – It’s been a minute since I’ve had the chance to see the entire Jewels (1967) program, as opposed to one of its three sections alone. And I’ve never seen Miami City Ballet dance the piece. So, it was quite a treat to experience both – the complete George Balanchine masterwork performed by the sensational Florida-based company, under the Artistic Direction of Lourdes Lopez. Cal Performances made such a smart choice opening their 2022-2023 season with Jewels. Simply said, it speaks broadly. While each of the three chapters does work in isolation, the full triptych demonstrates the range and possibility within the neo-classical ballet genre. There’s something for everyone: delicate sylph-like variations, plucky sass, bold regality. Miami City Ballet brought their A-game to the iconic composition’s unmistakable tones and layered moods, accompanied handily by the popular Berkeley Symphony. For some, Jewels may have evoked an elegant display case in a deluxe boutique. For others, different ballet traditions expressed through neo-classical choreography. In any event, Jewels’ captivating essence cannot be denied. And that essence absolutely percolated from the Zellerbach stage on Friday night. 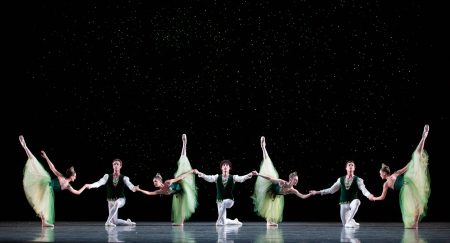 The Miami City Ballet in Emeralds
Photo courtesy of Iziliaev

Lilty, yet complex, chords from the orchestra pit set a perfect scene for the delicacy and loftiness of Emeralds, Jewels’ first episode. Emeralds did not disappoint. A gemstone known for its calming and clarifying properties, nothing onstage was ostentatious, flashy or overdone. Every extension, every step, every arm had such intention and joyful subtlety. Bodies (seventeen of them!) glided across the stage like ethereal beings, clad in viridescent hues against a mystical, glimmery green scrim. It was mature. It was sophisticated. And the musicality of the various movement phrases was phenomenal. Wispy port de bras met fluttering bourées. Footwork was crisp for the most part, except during single-leg jumps, of which there were many. Dancers would leave the floor with a lovely ballon, but the pointed underneath foot seemed elusive for many on Friday.

After spending a moment in green’s calm and clarity, Jewels pivots drastically to red’s power and passion with Rubies. This middle portion has an extreme cinematic quality, like it could have been included into an old Hollywood movie or transported to the Broadway stage. Stravinsky’s surprising, unpredictable score frames an equally sly and mysterious atmosphere, Balanchine’s choreography equally unexpected and beguiling. Direction changes slice through space like a knife. Flexed hands and feet suggest command and intensity. Cannoned timing questions how a movement phrase “should” unfold. Dancers froze in 2nd position plié. Extreme arabesques came out of nowhere. And parallel passés stood their ground, refusing to venture into the land of external rotation.

Jewels concluded with the sweeping, grand, waltzy bliss that is Diamonds, a stone representing both strength and love. An immense cast of thirty-four dances this final section, a truly impressive feat. From the precise unison to the neo-classical musicality; from the courtly motions to the regal grand pas de deux, Diamonds was quite dazzling. Once again bourées glistened and arabesques expanded; lifts swirled and skimmed in the same instant. Diamonds is fantastical indeed, with many ta-da moments, and a charming use of demi-pointe in pointe shoes. If you love the Act III ballroom scenes from many of the large-scale narrative ballets, you will love Diamonds. Even if it is a bit lengthy.

September 25 – Early fall in San Francisco can be unpredictable, climate-wise. One day might be super-hot, and the next, downright wintery. But there are those rare days that are ideal. Warm, sunny and clear, where it seems like the whole city is outside. At least, that’s what it felt like last Sunday afternoon at Fort Mason Center as Smuin Contemporary Ballet closed their first SF weekend of Dance Series 1. 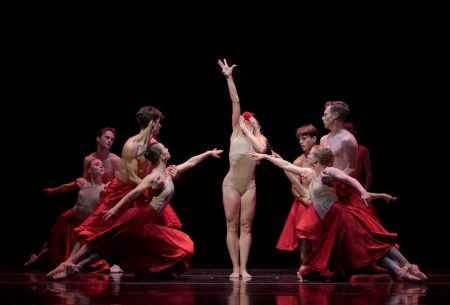 The company looked extremely strong in this program of great range and variety – two revivals alongside a world premiere: Rex Wheeler’s Take Five (2019), Annabelle Lopez Ochoa’s Requiem for A Rose (2009) and Osnel Delgado’s new work, The Turntable. There was much to delight on the Cowell Theater stage, but it was the concept of each piece that stole the show.

Set to a selection of Dave Brubeck tracks, Take Five celebrates the composer’s oeuvre and his fondness for a 5/4 time signature. It’s fun and entertaining. It has a distinct forward propulsion as well as Wheeler’s clever choreographic nods to the piano, the upright bass and the drums. But the genius of Take Five was how the costuming (by Kaori Higashiyama) was used. While the style of costume remained consistent throughout, Wheeler had the cast (five women, five men) constantly donning a new color, signaling a change in musical mood and atmosphere. Bright neon pink framed the high-octane opening and the finale. The choreography for green was sophisticated, smooth and nuanced. Orange heralded in a more spirited and plucky tone, maybe even a little flirty. Blue met with cool, chill, laid back motions. Red brought allure and purple, a knowing sense of nostalgia. Take Five was a splendid opening for the program, though it did have too many internal stops and starts for my taste.

Originally created for Philadelphia Ballet in 2007, Ochoa’s Requiem for a Rose is one of those very special pieces. For a lot of reasons. Captivating choreography, a sweepingly romantic score and stunning visuals. The work begins with a sole dancer, Tessa Barbour at Sunday’s performance, costumed in a nude leotard with a rose in her mouth, almost like a rosebud. Her movement is sharp and angular, and she dances to a pulsing heartbeat, indicating a manifestation or a birth. Then, she is joined by twelve dancers wearing flaring red knee-length garments, cycling through fluid, soft phrases, accompanied by Schubert. It was as if we were witnessing the life cycle of a bloom – the opening soloist like the stem that was birthing a dozen petals. All the internal variations with their swirling spins and level changes showed how a flower changes over time. How the bloom might shift to the right or to the left; how it might droop and then revive; how it might close and then open again. Requiem for a Rose was close to perfect, the recorded music just needed to be a little softer.

Closing Dance Series 1 was the premiere of Delgado’s The Turntable, by far the most contemporary piece in the lot. An ensemble work for sixteen, it was again the concept that drew the viewer in. Or at least this viewer. That concept was the notion of turning itself. In addition to having a small turntable center stage and a lighting design (by Michael Oesch) that appeared to rotate on the stage’s surface, the sheer idea of turning was paramount. Seeing something new, experiencing a different vantage point, continual change, all while being anchored to a single point, like a turntable. Most of the cast really leaned into Delgado’s lush movement, while a few looked as though they were having trouble letting go of a classical ballet aesthetic. And again, the recorded music was a little on the loud side.

October 28th – If you want to revel in the Bay Area contemporary dance scene’s incredible talent and artistry, go and see Nancy Karp + Dancers. Any chance you get. For each new project, Artistic Director and Choreographer Nancy Karp assembles a powerhouse ensemble, and for fly through the night, and land near dawn, which premiered Friday evening at the Dresher Ensemble Studio, she has done it again. The cast of seven demonstrated aplomb, grace and ferocity in the three-part work – a work that looked to the skies and ornithology for inspiration. It was action packed. It kept your eyes glued to the stage. And it was relatable. The dancers were not trying to ‘become’ or ‘transform’ into birds à la Swan Lake. Rather, they showed, through Karp’s imaginative movement, how one might respond to and internalize the majesty of such creatures. fly was a great piece and a lovely way to mark the company’s 40th anniversary. 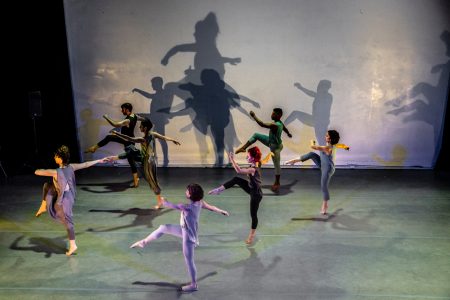 While the choreographic vibe and dynamic remained solid, albeit very similar, throughout, each section of fly highlighted a uniquely avian quality and tone. Part 1 – expanse. Bodies soared, floated and carved out space with every arm and leg motion. One could see elegant wingspans and buoyant, lofty footwork, particularly in the parallel sissones and soubresauts. Each chapter was framed by a different, original musical composition by David A. Jaffe, and this one was titled Fox Hollow. It was such an amazing treat to have the music performed live by the Friction Quartet, with Jaffe joining on the mandolin and mandocello. Having said that, part 1’s choreography and music felt a bit mismatched. In the movement phrases, we saw sweeping breadth and volume and, in the score, plucky, atonal dissonance. Of course, there is no rule that the music and the movement need to match, but here, the dissimilar qualities took focus from one another. Each on their own was quite dazzling, just the pairing wasn’t my cup of tea.

As the evening continued and fly glided into parts 2 and 3, the music and the choreography found and established a beautiful marriage. And if the opening chapter was all about open vastness, part 2 (set to String Quartet for 2 Instruments) was all about suspension and release. Long arabesques stretched to the extreme, until they sprung back, coiling into passé turns. Attitude postures, with their intense internal spiral, wound and twisted and finally, collapsed into the ground.

Part 3 brought the viewer into the land of sprightly jumps and springy steps – more parallel soubresauts, quick chaîné turns, assembling of the legs in the air and bouncy chaissés. And the score for this final segment, also titled fly through the night, and land near dawn, returned to a more staccato dissonant space. But because the dance for this section was sparkling and sharper, it fit masterfully this time. In fact, I would characterize the whole scene of this closing chapter as almost cinematic in quality. Every moment, every step was so vital, so full of life, so otherworldly. I only wished the dancers hadn’t looked so serious and somber for much of the work. There was a tiny bit of levity here and there and the mood was so joyful when that happened. I think more joy and less angst is what this viewer is craving these days, and I’m sure I’m not the only one.