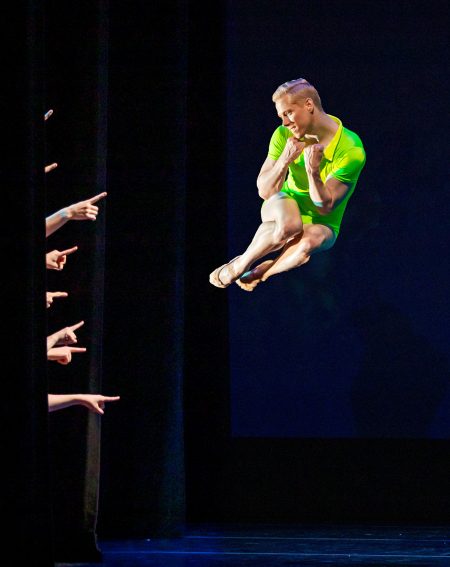 September 21st (matinee) – The San Francisco/Bay Area dance scene unfolds year-round, with each month of the calendar offering exciting performances and awaited annual events. One of these anticipated moments comes every fall with the launch of Smuin Contemporary Ballet’s new season programming – three different mixed repertory bills that tour the Bay Area through June. Last weekend, the first of these played to a packed house at the Lesher Center for the Arts. And while there wasn’t a specific theme outlined for Dance Series 1, one certainly emerged over the course of the show: the deep and enduring connection between dance and iconic, legendary music and musicians.

Rex Wheeler’s Take Five, an ensemble work for ten set to a suite of Dave Brubeck selections, opened the celebratory afternoon with flair and gusto. Right from the start, jazzy tropes and nuanced poses imbued the entertaining romp: stretchy, elongated legs; grand floor slides; delicate, staccato jumps; and sinuous upper spines. Wheeler subtly incorporated postures inspired by musical instruments – hand motions that mimicked a piano, bodies transforming into upright basses. Like the ongoing pulse of the music, nothing onstage was static or frozen; kinetic energy was everywhere, though at the same time, choreographic busyness was avoided. And Take Five had a quintessential Michael Smuin-feel to it. I think the company founder would have been very proud to see the piece as part of the mainstage repertoire (this expanded iteration is a premiere, while the earlier edition was created for Smuin’s yearly choreographic showcase in 2018).

With its impressive technical unison, the men’s trio danced by João Sampaio, Peter Kurta and Zachary Artice, was definitely a highlight. As was Artice’s later solo, which captured the space with powerful jumps, sharp shapes and technique that was textbook exact without looking sanitized. Though Take Five had many of these special moments, the partnering struggled to combine passion with control and precision. And as with many dances that follow a suite structure, there were too many stops and starts throughout, which took away from Take Five’s overall flow. 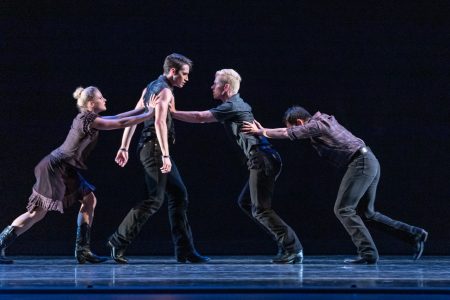 In contrast, flow was strong in James Kudelka’s The Man In Black (2010), an emotionally charged quartet mining the musical canon of Johnny Cash. Performed by Artice, Tessa Barbour, Mengjun Chen and Sampaio, dramatic human themes abounded in this constant stream of consciousness. Right from the start, the idea of unsteadiness read clearly with harsh directional changes, off-centered poses and cantilevered balances. Framed by Cash’s expressive, often haunting vocals, bodies slumped over in moments of fatigue; images of self-harm screamed from the stage; exaggerated, slowed fight scenes emphasized violence; and manipulation took a seat at the table as the dancers took turns arranging and forcing each other’s limbs. So not a light work, to be sure (though some clever line dancing motifs did add a hint of levity from time to time). The Man In Black’s power, potency and unflinching nature, with equally powerful and potent performances, was undeniable, down to the final moments as, one by one, the three men exited the space to leave Barbour onstage staggering and searching for answers.

Dance Series 1 closed with Michael Smuin’s 1997 interpretation of Carl Orff’s famed Carmina Burana, which I’ve seen a number of times. Check out my previous thoughts and analysis at:

October 30th – La Bayadère isn’t a ballet you go to for the story, at least I don’t. Originally choreographed by Marius Petipa in 1877, with additional material added mid-20th century, the full-length work is plagued with some tough narratives, especially viewed through a modern lens. On the surface, the ballet follows the complicated triangle of Nikia, Solor and Gamzatti (and a huge cast of characters surrounding them), with all of its passion, entitlement, jealousy and revenge. But look deeper. It’s also impossible to ignore La Bayadère’s gender dynamics, socio-economics and cultural appropriation. Some versions, like the Mariinsky Ballet’s, which just began its Cal Performances’ engagement on Wednesday night, even cross into some challenging terrain with animal props (references that aren’t necessary for communicating the story and should have been re-thought long before now).

I go to La Bayadère to see the dancers – to witness their incredible technique and artistry. And the entire Mariinsky Ballet was phenomenal. In the span of three hours, so many instances of physical wonder unfurled. As Magedaveya, Maxim Izmestiev’s double attitude jumps were out of this world. Over and over again, he leaped extraordinarily high, nearly making contact each time with the back of his head. David Zaleyez’s Dance of the Golden Idol similarly defied gravity with its bravura and ballon. And it was no surprise that each of the three principals shone throughout. Ekaterina Kondaurova’s (Nikia) series of solo arabesque developpés en pointe was completely amazing. And Act II’s pas de deux between Gamzatti (Yekaterina Chebykina) and Solor (Andrei Yermakov) proved layered and nuanced. As they began their choreography, it seemed like they were struggling to connect, to find their timing as a pair. Though as I considered the narrative, it stood out that perhaps this was purposeful – they were never meant to click as a couple. 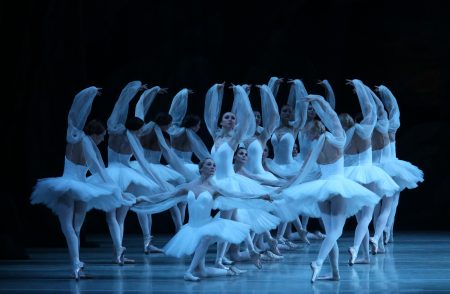 As wonderful as all of these performances were, La Bayadère belongs to the women of the corps de ballet. From their first appearance in Act I with a group dance delightfully focused on the parallel positions of the body to the extreme technical prowess in the next scene’s scarf variation. From the sheer volume of different Act II divertissements to the iconic Kingdom of the Shades scene, it was these women who stole the show. Precision and specificity was paramount in every moment: unison arabesque hopping turns, an abundance of identical front attitude positions, perfectly timed pirouettes from fifth, entre chat quatres in complete synchronicity and of course the transcendent sequence of arabesques and tendus from upstage to down front in Act III.

La Bayadère is a longer ballet, though the action moved along quite swiftly, including in the beginning moments, which have a lot of gesture and pantomime. Often such sections can tend to drag a bit, but not here. While I did love all the corps’ dances and enchaînements at the celebration of Gamzatti and Solor’s wedding, this middle Act could be trimmed significantly without much, or any, effect on the story. The number of internal applause breaks (those that happen during the scenes as opposed to at the end of an Act or the end of the entire ballet) also can present challenges – there are a lot of them in La Bayadère and each one is fairly lengthy. These internal bows are extremely well deserved, no question. Though, an unintended side effect can be taking the audience out of the story and breaking the flow of the evening. But then again, with such a story, maybe being taken out of it periodically is not a bad thing.