The Berlin based, Familie Flöz, mix mime, physical theatre and pure delight. Teatro Delusio was my first experience of the company, but hopefully not the last. The setting is back-stage in an opera house, where three stage hands carry out their tasks with varying degrees of success, surrounded by theatre folk, but with dreams of their own. The extraordinary fact is that three mime artists portray 33 different roles: musicians, singers, dancers, an impresario, a cleaner, all with distinctive characters and movements in brilliant masks by Hajo Schüler. 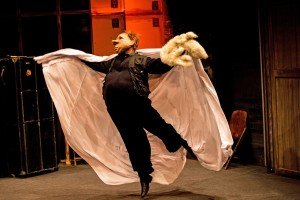 The show opens with a tall stage hand, Thomas van Ouwerkerk, a klutz who prefers to have his nose in a book or stroking his ferret hidden in a trunk, meandering round the stage causing havoc. The short one, Andrès Angulo, full of confident bravado enters, terrorising his tall companion and attempting to correct things, but it is only when the third, portly bloke, Johannes Stubenvoll, enters that things are put sort of right, although a tangle of wire is omnipresent. An opera diva appears full of criticism directed at the the stage hands for making too much noise, not having things ready etc etc. Slowly it emerges that the portly guy is hopelessly in love with her, while the theatre director is her companion.

After an act of opera, mysteriously we seem to be in the midst of Swan Lake, Angulo plays four different ballerinas, one timid, another always ready for a fight, in a mime tour de force. One dancer is late and Ouwerkerk falls for her and there is a sweet affair that eventually runs out of steam. Angulo as the short stage hand has dreams of being on-stage and gets a chance when an actor walks out, but he doesn’t make the grade. 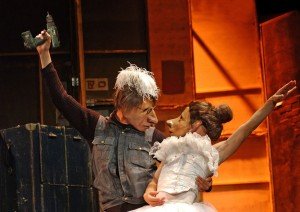 The sub plots abound and apart from an occasional slowing of pace, the action is fast, furious and very funny. An opening and closing arch is provided by a half size ethereal puppet girl, perhaps a theatre ghost, manoeuvred by the three artists, so we get to see their faces. The skill of all three performers is prodigious and the audience showed their appreciation at the final curtain, cleverly done as the three go to the back of the stage, that is the imaginary opera stage, so they take their applause with their backs to us, before finally turning round. Ausgezeichnet!