Born in the Republic of Georgia, George Birkadze trained in Georgia and graduated from the Bolshoi Ballet Academy in Moscow.  He then danced in Russia, Europe, and the United States, and has taught dance all over the world.  He is also an award-winning practitioner and teacher of martial arts who believes that all dancers are fighters and vice versa.  Now retired from dancing and settled in Boston, he has choreographed for Festival Ballet of Providence, Sarasota Ballet, and Ballet Philippines, among others.  His latest project is a reimagining of The Firebird for Ballet Philippines, which will make its debut in August.  Carla DeFord caught up with him in May to ask about what he’s been up to lately.

CD: How did you connect with Ballet Philippines?

GB: In 2012 I was visiting Hong Kong with my friend for a business meeting.  He told me there was a big ballet company in the Philippines and asked whether I wanted to teach class there.  Before he spoke to me, he had approached Ballet Philippines staff members, showed them my résumé, and asked whether they would like me to teach.  They said, “Of course, why not?”  So I accepted the offer, taught the class, and they were pleased.  Right away I felt a connection with the company and their culture.

Then I discovered that one of my first teachers, Vakhtang Chabukiani, danced there in the 1970s.  There were photos of him in their museum, along with other famous dancers, such as Nureyev and Fonteyn.  Forty years ago when the country was governed by General Marcos, Ballet Philippines was considered “the Pearl of Asia.”  It was a large and prestigious company with an amazing theatre that has a stage larger than the one in Boston.

CD: What’s the size of the company?

GB: When I began teaching there, Ballet Philippines had 46 dancers, but three years later it had shrunk to 26 because of economic issues.  The company is still very stable, however, thanks to the support of Miss Universe 1973, Margie Moran-Floirendo, who is the chairman of the board.  Because of her, the company is still alive.  Now they have 27 dancers (plus an apprentice company), and I staged my first ballet for them in 2014.

CD: What work have you done with Ballet Philippines in the past? 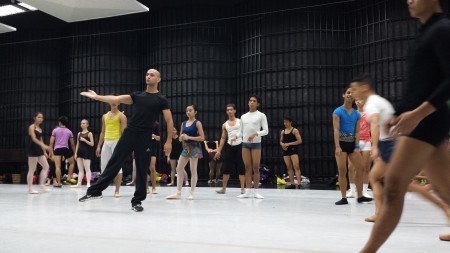 GB: In 2013 I taught at Hong Kong Ballet and visited the Singapore Dance Theatre.  Ballet Philippines continued to invite me to work with them.  It’s just a one-hour flight from Hong Kong, so I went back often.  In 2014 I created two dances for them as part of a program called “Masterpieces,” and they’re still touring with it.  They’ve taken it to China, Korea, Japan, the Middle East, Canada, and the West Coast of the U.S.  It was a great honor for me to be selected as one of their choreographers.

That program included my piece “Farandole,” which I changed slightly from the original version we did with Sarasota Ballet.  Since the Filipinos have an acrobatic style, we did more tricks, like jumping.  In the choreography I emphasized the Spanish influence since the music is by Bizet, the composer of “Carmen.”  The Filipinos have a strong Spanish connection because their country was ruled by Spain for nearly 400 years.  They also danced my piece “R/J,” an abbreviated take on the timeless tragedy Romeo and Juliet.

CD: Considering the popularity of the Cranko and MacMillan versions, why were you interested in creating new choreography for Romeo and Juliet?

GB: I did it in a more modern way.  My version is a pas de deux for Romeo and Juliet; there’s no Mercutio or any other secondary characters.  I didn’t have the resources to do a full-evening ballet, so I did it in seven minutes, and it worked very well.  Romeo and Juliet meet and come together; then they separate and die.  But you don’t see Juliet die, you only see the moment when she wakes up, and it’s indicated by a simple movement of her hand.  The piece stops right there.  It’s up to you to decide what happens next.

I used music by Shostakovich from his Ballet Suite no. 2.  It’s a wonderful lyric adagio that he could never perform because of conflicts with the Russian communist government.  He wrote several other ballet suites, and in the future I’m planning to make a dance to one of them that I will call “American Pas de Deux” – because I’m here in the United States.

CD: Did you have live music for your Romeo and Juliet?

GB: No, but for Firebird we will.  It will be performed by the Philippine Philharmonic Orchestra. 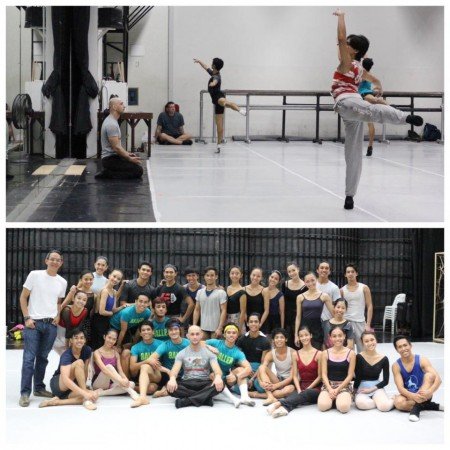 CD: How did it happen that you were invited to create a new Firebird?

GB: I was discussing future projects with Ballet Philippines staff, and they asked me what I would like to do next.  I love to create stories, so Firebird seemed like the perfect fit.  The version we are doing is quite short, so it will not be the kind of enormous undertaking that often comes with putting on a full-length ballet.  In addition, the story has ties to Philippine culture and history because they have their own traditional story about a legendary magical bird.

CD: Who else will be involved in Firebird?

GB: My costume designer will be Mark Lewis Higgins, co-director of Slim’s Fashion and Art School, which was founded by his mother in Manila.  He has had exhibitions in Hong Kong, London, and New York and is a very interesting designer who really understands costume history.  This will be the first time he has designed costumes for a ballet. My set designer will be Ohm David who does a lot of work in the U.S. and around the world.

CD: How will your version of Firebird be different from previous ones?

GB: We are transporting the story to Asia.  The firebird myth exists not only in Russia.  In China, the bird is called the phoenix; in India it’s the peacock; in the Philippines it’s called the Sarimanok.  The national story of the Philippines is similar to, and older than, the Russian version.

Since my Firebird takes place in Asia, Prince Ivan is in an Oriental setting when he encounters the phoenix.  This setting actually resonates better with me for this story.  I made the villain, Koschei, similar to an Indian demon.  The princesses, who are under Koschei’s spell, are Chinese porcelain dolls dressed in Chinese-style costumes.  The monsters, who are the slaves of Koschei, will be in gold, and Koschei himself will be made of gold like the golden idol in La Bayadère.

In this version the firebird is not a little vulnerable lady.  Like the phoenix, she’s a big, powerful animal who is half-human and half-bird with magical powers.  She can be friendly, but she can also hurt you.  Like a siren or griffin, she has a woman’s face and upper body.

When she gets trapped in Koschei’s nets, Ivan rescues her.  Then she gives him the magic feather and says, “If you ever have any problem, just call me.”  He is mesmerized by her because she is like a huge eagle with a beautiful face, but he can talk to her, and she is very intelligent.

When she comes to rescue him, she’s sexy and powerful.  This is not a children’s story; it’s more modern and mythological.  It’s a story for adults that will appeal to children too, like Swan Lake.

We will also have the lead princess character, who is a foreigner.  I see Koschei as a collector who brings all the most beautiful princesses from around the world and puts them under a spell.  Prince Ivan falls in love with one of those princesses.

This production will have an Asian perspective, with Asian leads.  They haven’t done a Firebird in the Philippines for almost 30 years.  Now it’s coming back, and it is an important event for the company and for Philippine culture because they’re going to tour with it.  I’m very honored that they are allowing me to do it.

CD: Will there be any fight scenes? 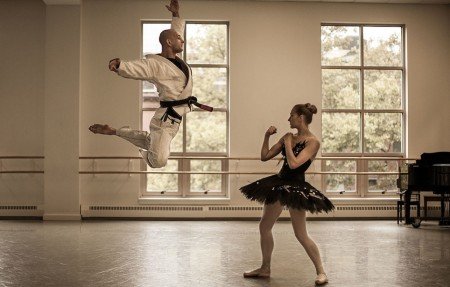 GB: Yes, the Firebird fights Koschei, the monster.  I want to keep the choreography of the fight scene a bit of a secret, but I will say that my martial-arts background was helpful in staging it.

CD: How long will this production be?

GB: It will use the Firebird Suite that Stravinsky created in 1919, which runs about 40 minutes, as opposed to the original score, which runs over an hour.

CD: Will you continue your interest in martial arts?

GB: It was a hobby at first, but it’s now an important part of my life.  I started doing martial arts not only to show that dancers are not weak, although many people think so, but also to show how strong we are, and I think I succeeded in that.  Lots of people who have fought me, whether they won or lost, have said, “Oh, this guy is a dancer and he’s a badass.”

When I was a Georgian in Moscow, I was bullied.  I had to be able to fight back.  I saw dance as my ticket out of the Soviet Union, but many boys were jealous of me because I was with the girls.  I never had a problem with my own friends, only with boys who didn’t know me.  I think ballet is the hardest work in the world.

In the fighting world people know that dance training is an advantage.  I’ve met a couple of dancers that do martial arts and a couple of martial artists that take dance.  In ancient Greece there was obligatory training in both athletics and dance because dance taught coordination.  I have found many similarities between the dancing and fighting – they each require physical awareness, strength, and respect for the art form.

CD: What else is in your future?

GB: I have a degree in show-business marketing, and I recently co-founded an agency in China, called Performing Arts Corporation, to promote ballet and opera events.  We will feature stars from around the world in mostly classical repertoire.  We plan to hold shows in venues throughout Asia and around the world, and part of the proceeds will go to an Asian charity.

My knowledge of and passion for opera comes from working for six years with the opera in Barcelona at the Gran Theatre del Liceu.  I danced there and became a production assistant and in-house choreographer for some productions.  I worked with David McVicar on several projects and with Dario Fo, who staged Rossini’s La Gazzetta.  So promoting opera events makes sense for me.

While I was in Spain, many principal dancers asked me to choreograph for them, including Angel Corella, Herman Cornejo, Cory Stearns, Maria Riccetto, Matthew Golding, and Iain Mackay.  For them I made short pieces for galas in Europe.  This is something I’d like to continue to do as well.

CD: What are your long-term goals?

GB: I wish I could devote myself entirely to choreography, and I hope things will progress in that direction, but at the moment I am not busy enough to be doing only that.  So when I am not choreographing, I enjoy teaching and coaching.  I always stay busy though, and I will always be involved in the arts; it’s where my heart and soul are.