With inspired artistry and unceasing energy, Brazil’s Focus Cia De Dança burst forth on Washington, DC’s Dance Place stage in Still Reich, a collection of four pieces choreographed by Artistic Director Alex Neoral, all set to a different works of music by contemporary American composer Steve Reich. Each of the four choreographic pieces highlights something unique in the accompanying musical compositions. The company’s seven strong and seductive dancers committed themselves fully to the challenging choreography as well as to the interpretation of Reich’s original and often unusual music. In between the separate works, excerpts from interviews with Reich were broadcast. This gave the audience time to reflect before the next dance began, but it surely also gave the dancers time to catch their breath and change costumes, too.

In the first piece, Pathways, the pedestrian costumed dancers, as if engaged in contact improvisation, frequently rolled over or rode atop each other’s backs and intertwined their limbs in interesting ways, almost like the game Twister. With hands jointly clasped, couples gracefully unfolded or propelled themselves playfully around and around. There were many rewarding moments of repetition, including a mysterious canon of hand and arm gestures in which the dancers, like factory workers on an assembly line, completed an intricate sequence of tasks. 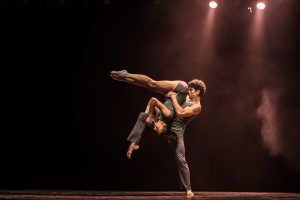 The following work, Trilhas, featured dancers who visibly struggled. In a duet, a male and female grasped their partner’s head, hands wrapped around the face, and swung in circles like wrestlers. Dressed unremarkably in dark solid colors, the focus was clearly on the movement. Here, the repetition that made the deepest impression on me was a shudder in which the dancers on relevé in a staggered straddle-like position rapidly switched weight from one leg to the other. Deep leans and dramatic catches also recurred. 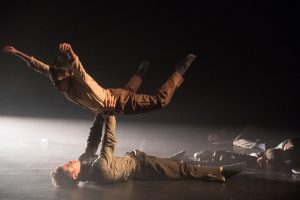 Next came Wood Steps, which, according to the program notes, is about the lives of nomads. The dance, however, started to the music created by the dancers’ shoes as they stomped. They all wore shades of brown, and they carried cloth bundles filled with something bulging in front of them. The hidden contents of the kangaroo-like pouches turned out to be shoes, which tumbled out and hit the floor with a perfectly timed heart-stopping thump. The resulting piles of shoes reminded me of the intensely moving collection of shoes confiscated from concentration camp prisoners at the Holocaust Museum in DC, which in turn reminded me of Reich’s Different Trains,  a haunting composition addressing the harrowing stories of holocaust survivors. The dancers scrambled over the shoes and scattered them. In a mesmerizing section, a group of dancers formed a line across the back of the stage and smoothly and continuously rolled and merged and flipped and somehow kept the line moving, their bodies flattening and making puddles on the floor.

Still Reich concluded with Keta, to Reich’s famous composition Drumming, which was based on a trip he took to Ghana. The African percussion is lively to say the least, and the dancers were anything but still. I was impressed that they had enough power left at the end of the program to pull off Keta, as it’s easily the most physically exhausting of the four choreographic works that make up Still Reich. Amazingly, this is where the dancers shined the most. Costumed in high-waisted black pants, bare upper bodies (yes, the women were nude on top as well as the men), and wooden beads around their necks like collars (Neoral designed the costumes), the dancers attacked the beats with ferocity. The stage appeared to boil as the dancers vigorously moved, their fantastic core and back musculature prominently on display. The synchronicity among the company members and the music was thrilling. Focus Cia De Dança definitely deserved the warm reception it received, especially for the finale’s nonstop dynamism. 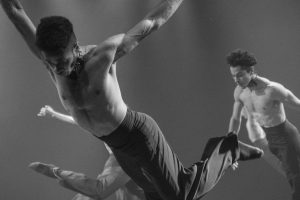 Maybe because the company isn’t well known locally, the house wasn’t totally full, which was unfortunate. Focus Cia De Dança delivered an exceptional performance. Neoral’s choreography is stunning and sophisticated, and his dancers are first-rate. I hope that Focus Cia De Dança will be greeted by larger crowds when the company comes to DC again. I feel certain many in the audience are already eagerly awaiting the company’s return.