Fruits borne out of rust is probably like nothing you’ve ever seen before. The artists who created it are from Japan. They’re extremely talented and inventive, and the result of their collaboration is a performance that challenges the audience while remaining highly entertaining. First, one may wonder about the title. A note from the director, known by a single name — Tabaimo, speaks about rust signaling a change in iron as it seeks “to obtain a more stable state of matter,” and how instability and stability cycle “progressing little by little until the fruits of this cycle are born.”

I’ve studied Japanese culture, and rust is something for which the Japanese hold a special appreciation. There’s a Japanese restaurant in Washington, DC, Daikya, whose exterior is dominated by a distinctive laser-cut steel structure that has rusted. The rust isn’t considered a flaw and isn’t seen as ugly; rather, it’s natural emergence presumably was precisely the intent of its designer.

Fruits borne out of rust definitely cycled and produced fruit. While I didn’t locate rust, exactly, I did find plenty of amusing eccentricity. As the audience filed into the theater, Tabaimo was standing on stage drawing on a whiteboard with markers, her back to the audience. She sketched a sharply tilted cake with strawberries falling off of it (in Japan, a woman who is unmarried after age 25 is sometimes scornfully referred to as “Christmas cake” due the inability to sell the popular holiday dessert — a sponge cake topped with whipped cream and strawberries — after December 25, as it’s traditionally eaten on Christmas Eve), a dove, and the title of the work on the board before someone else came on stage and wiped the board spotless, erasing what she’d just drawn. 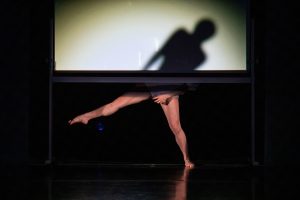 The whiteboard was then used as a prop behind which a dancer stood and onto which a shadowy body was projected. The top half of the dancer was formed by a dark flickering projection (the dancer’s actual upper body was hidden behind the board), and the bottom half consisted of the dancer’s real legs. Somewhat predictably, the top and bottom halves humorously split.

Many short vignettes followed. The dancer, Chiharu Mamiya, next became “The woman in the window” (the title was projected onto the whiteboard). As she parted her hair and traced her face with her hand, a glowing ghostly likeness eventually emerged behind her. The two figures spookily mirrored each other until they didn’t, and like the separated body halves did earlier, they asserted their own independent movement.

In another scene, titled Black Hole and the Sun, the live musicians loudly played a vigorous pop/rock tune (and they played it really well!). The projections grew more complex. An animated bug crawled up a crack on the whiteboard, while on a scrim toward the back of the stage, an upside down illustration of a bedroom materialized. Mamiya tossed and turned, red tree branches magically sprouted from between the floorboards. Quite trippy! As in Alice in Wonderland, ordinary things morphed and surprised. 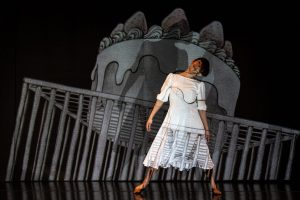 Shadows were used to great effect again and again, as were the rather surreal animated video projections. Certain shapes and images repeated, among them a rotating cube and doves, and yes, a strawberry cake. Mamiya ended up in a giant bird cage. She kicked, jumped, and spun like a trapped creature. In a subsequent section, a projection of a hand-drawn red curtain, slightly parted, turned into folds of female genitalia. Mamiya began pacing and conversing in three different languages (French, English, and Japanese). Her spoken words slid into gibberish. Subsequently, she mused about giving birth, squatting and spreading her legs wide.

Later, an ocean formed made of lava lamp drops. Mamiya appeared to float among the bubbles. Like Fantasia, the music and movement and projections all swam and swayed together. Finally, toward the end, there was a tangle of vines, which could have also been veins. The audience was taken deeper and deeper into a seemingly never-ending thicket as electronic pianos dueled. The music became as repetitive as the dizzying snarls of continuously receding branches. 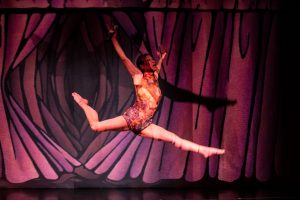 Fruits borne out of rust comes across as something that might have been concocted by a group of kooky high school art class misfits, with its abundant playful energy, except that the quality and attention to detail was so incredibly accomplished. This may be where the “rust” element applies.  The performers aren’t terribly youthful (both Tabaimo and choreographer Morishita were born in 1975), and their work seems to contemplate the gifts of an aging body.

In these turbulent and anxiety-ridden times, with a novel coronavirus striking in the United States and across the rest of the world and stock markets faltering, I found a welcome distraction in the many layers of meaning and beauty offered by this unique multidisciplinary performance. The audience seemed very receptive. Afterward people murmured, “Cool,” and “Can you explain it to me?” 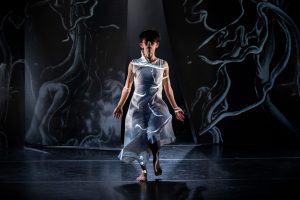