Circus skills and dance share many common features: physical dexterity, strong sense of rhythm, and non verbal communication with an audience. So, it’s not surprising that collaborations between these two theatre forms are becoming more frequent in an age when barriers between art forms are breaking down. One of Einstein’s contributions to the philosophy of science was that combining different areas could often result in breakthroughs and his ideas can certainly be applied in the arts. I remember the Canadian circus group, 7 Fingers, working with three choreographers to make Tryptyque and in particular, Nocturne by Marcos Morau, who brought together circus skills, choreography, surreal imagination and humour in a work that had me grinning with delight. 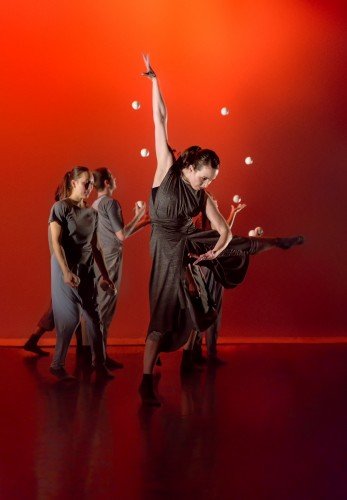 Gandini Juggling’s founder, Sean Gandini, has always been ready to look for collaborators including the much missed Gill Clark. For Spring, Alexander Whitley, a dynamic new force on the UK dance scene, has worked as Co-Director alongside Gandini and three of Whitley’s dancers perform with the jugglers, sharing both skill sets. Although in the opening we see a solo dancer with expert hoop spinning on either side, for the most part the two forms are successfully merged.

We see balls, clubs and hoops juggled in a variety of combinations on a plain stage enhanced by Guy Hoare’s lighting, especially the giant shadows cast on the back wall, including a section when the shadow of a single performer is repeated to form a perfectly synchronised ensemble. We sometimes get discourses on the show’s central theme of colour, which are the weakest part of the show. But the physical representation of these ideas through Hoare’s varied coloured lighting and with a later set piece with hoops white on one side and a range of colours on the reverse, makes for one of the highlights. The jugglers throw the hoops up and also twist them so that we get all white transforming into technicolor with a flick of the wrist while still juggling. Whitley’s dancers perform vibrant contemporary dance alongside their own juggling duties, with floor work and capoeira to the fore. But Whitley’s influence is also there I suspect in the use of space and the patterns that the performers create onstage. Although the mood of the work is usually calm and closer to contemporary dance then circus – no applause for tricks well done – we do see some successful elements of humour with doubled up figures walking across the back of the stage and a line of four that reminded me of the Little Cygnets from Swan Lake, but passing and throwing balls between their entwined bodies. 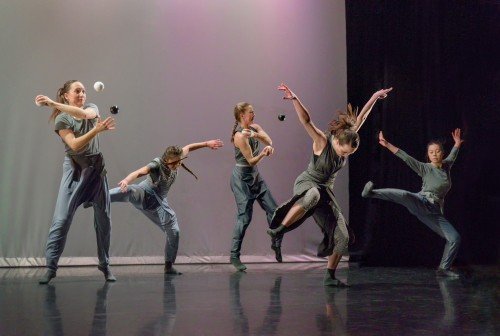 At one stage I was concerned that the mix may wear thin after a while, but if anything the show grew stronger as it progressed with Gabriel Prokofiev’s rhythmic, quirky score providing a secure base for the movement. A scheduling synchronicity meant I saw Circus Abyssinia the night before – another successful development of the form, mixing a range of circus skills including superb juggling with dance elements and howls of delight from the audience at every trick accomplished. It was fascinating to see these two sharply contrasted, successful shows and it will be intriguing to see how the various strands of circus theatre develop in the years to come.