It’s not often the Queen and physical theatre are singing from the same hymn sheet, but Her Majesty’s recent pleas for a stronger community spirit in Britain echoes a theme that runs through The Wedding presented by Gecko, one of the UK’s most innovative companies. The finale was a huge love fest of singing and clapping that stirred hearts and set feet tapping. The ‘feel good’ factor is certainly something we need more of right now.

Despite the title, the work refers more broadly to other contractual agreements, though wedding gowns: long, gorgeous and all white feature strongly. Director Amit Lahav has both male and female wearing the gowns at various times, neatly sidestepping a whole raft of gender issues. 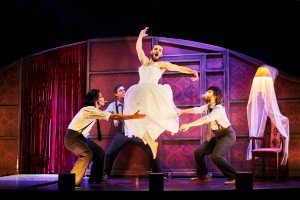 The idea that we are all bound by contracts of one sort or another, and that we all seek belonging and community has a flip side in borders and exclusion. These ideas are imagined in many imaginative ways by this hugely talented company.

Most players arrive on stage through a chute to land in what looks like a kiddie’s play pen replete with teddy bear and all very touchy-feely. But when one tries to take this route to exit, her way is barred.

The modern world of city bureaucrats, armed with clip boards and briefcases, intrude at intervals creating an alienating world of conflict and tension where one-upmanship pervades. 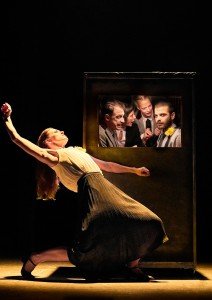 Immigrants are an issue difficult to avoid, an issue that raises a difficult question, is there no fundamental contract for a human being to care for another forced to flee in dire distress? Lahav manages to present the case with zero schmaltz and plenty of humour. From the moment a talking head emerges from the zippered opening of a battered wheelie case, we’re hooked.

Khalid emerges to entertain us with deft dance steps and Arabic phrases. Wife and Dad climb out of the small aperture (migrants are skilled at close containerisation) and working on the apron of the stage they engage directly with the audience. In a grand finale Khalid graduates to wearing his own white wedding dress and dance along with the crowd.

Wedding dance, in a variety of different cultural guises, adds further entertainment value in a lively upbeat show that still managed to touch on current concerns.