A year ago, in the context of reviewing yet another very fine performance, I wrote that Gelsey Kirkland Ballet, a Studio Company presently comprised of 17 dancers augmented by apprentices and students at the affiliated Gelsey Kirkland Academy of Classical Ballet, presents solid programs with very fine young dancers, but that this little upstart company hadn’t yet gotten the respect, or the acclaim, that it deserved. But I didn’t doubt that it soon would.

It still does, still doesn’t, but maybe not for much longer. The performance I attended Saturday, under the umbrella title “Eternal Spring, The Arrows and Errors of Eros,” filled the GK ArtsCenter theater. (The school, company, and theater are all housed at its still relatively recently-acquired space in the DUMBO section of Brooklyn,) Even allowing for dancer relatives and comps, that’s an accomplishment.  It was another knock-out program, one that the apparent loss of leading dancers in previous years didn’t diminish. And maybe it’s a signal of bigger things to come. 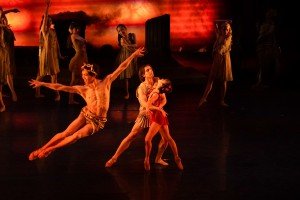 Two of the pieces on Saturday’s program were revisits with dances from last Spring’s season: The Jewish Wedding and Walpurgis Night. As was the case last year, they were the evening’s highlights. But they were augmented this year by an infrequently seen classical ballet that opened the program, and four relative miniatures – each a little gem, each of which received gem-like performances.

Particularly impressive about this program – as was the case in prior years – is the variety of styles assayed and conquered. Granted that Russian Ballet includes a range of styles within its historical ambit, and that a school and company that emphasizes Russian ballet should be fluent in all of them. But at this level, and considering the limited teaching and performing years under its belt, GK Ballet’s accomplishments are already noteworthy. 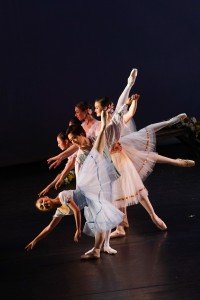 Arthur Saint-Leon’s La Vivandiere, which he created for Fanny Cerrito, is a little romantic, a little classic, and a lot of fun. The piece that GK Ballet presented is Saint-Leon’s 1848 restaging of the pas de six from the complete one-act ballet that he choreographed some 3-4 years earlier (which has been lost), so the theme of the vivandiere, a woman who follows military regiments and provides the soldiers with food and drink, is no longer present. What is present, however, is a delightful plotless dance that looks and visually feels like a relative of Giselle and Coppelia (the only full length ballet by Saint-Leon that survives), with a bit of Bournonville, a Saint-Leon contemporary who had French ballet training before assuming leadership of the Royal Danish Ballet.

La Vivandiere (the pas de six) has been reconstructed, revised and restaged several times, but the program does not indicate anything about the choreography aside from it being attributed to Saint-Leon. It was staged for this production by Liudmila Polonskaya, a member of the GK Academy of faculty.

In the first GK Ballet performance I attended, three years ago, the company opened its program with Raymonda Suite. I observed at the time that the dancers did a fine job with it, but looked regimented, as if they’d been imbued with the perfectionism that marked Kirkland’s performances – which of course would not have been surprising – and drilled to within an inch of their marrow. As I watched La Vivandiere, I thought much the same thing. Sometimes a little less perfection wouldn’t be a bad thing. The dancers all did a superb job with the difficult choreography, but everything looked absolutely perfect. Not a step, a hand, or a body angle out of place…with one exception: one dancer had to deal with a toe shoe ribbon that hadn’t picked up on the required perfection. But she handled the situation…perfectly…, and got through her featured dance without full support of one of her shoes…perfectly. 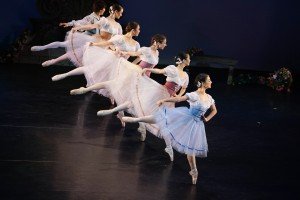 The lead couple were Nerea Barrondo, who is relatively new to the company (and, based on photographs I’ve seen, resembles Fanny Cerrito), and Koki Yamaguchi. Both danced with appropriate buoyancy and engaging “villagey” demeanor. The remainder of the group included Sophie Agnew, Risako Seki, and Natalia Sheptalova, each a member of the company, and Mayuno Kubo, a student at the GK Academy.

La Vivandiere was followed on the program by four brief dances, miniatures, which I’ll discuss somewhat out of performance order. Each was staged by two other members of the GK Academy faculty, Nikolai Levitsky and Vera Solovieva. 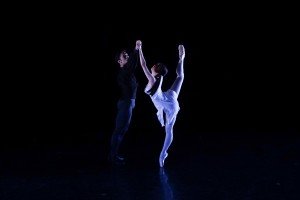 Although my understanding is that they’re choreographed to the same Dvorak composition, and share the same liquidly romantic style, Kasyan Goleizovsky’s pas de deux Melodia is different from the pas de deux titled Melody choreographed by Asaf Messerer, which the Mariinsky included in its “Tribute to Maya Plisetskaya” program at BAM a year ago. The Goleizovsky version, danced here by Haruka Yamada and Johnny Almeida, though somewhat less spectacular looking, is also less of a cliché, and no less beautiful and moving a manifestation of love. Starkly staged and costumed in black and white, the pas de deux contains gorgeous imagery. And I don’t care that it’s suds: it’s beautiful suds, beautifully performed.

Gopak, also known as Hopak, is a Ukrainian national dance that has also been described as a Cossack dance. A solo Gopak was choreographed by Rotislav Sakharov in his ballet Taras Bulba, and this solo has been excerpted and performed as a standalone example of bravura dancing. Here, Kaito Yamamoto, in full Cossack costume, was a whirling, leaping, jumping dynamo – maybe a bit less polished than the execution might have been (posture a little straighter; legs a little less wobbly on landing), but these are minor observations. It was very well done, and the first of many dances Saturday night that had the crowd gasping and cheering. 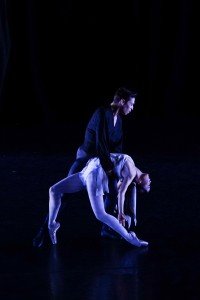 On this program, GK Ballet added two “miniatures” by Leonid Yakobson to its repertoire: Village Don Juan, and Eternal Spring (from the Rodin Collection of Miniatures). Each is quite wonderful.

Yakobson was a Russian Jewish choreographer who fell out of favor during the Soviet era, creating dances that violated the Imperial Ballet stylistic orthodoxy, and that were considered too “Jewish.” Village Don Juan is an example of both. It’s a slice of shtetel life – an unexpected subject, perhaps, but still exquisitely folksy.

Played by Chieh-hung Hsueh, who is not listed on the company roster, this would-be ladies-man is all lovably self-absorbed and as irresistible as he thinks he is as he pursues the compliant, libidinous village girl, danced by Georgia Brinkman. As he teases and squeezes (and pretends to attempt to seduce every female in the audience in the process), she alternatively feigns resistance or annoyance. It’s sweet. Both dancers seemed to be having as much fun as the audience. 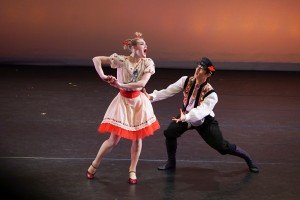 Also very sweet is Yakobson’s Eternal Spring. This pas de deux, choreographed to music by Claude Debussy rather than the ‘traditional’ music he used for Village Don Juan, is Yakobson a little out of his Jewish village comfort zone. It’s a snapshot of two playful young dancers in love, delightfully danced by Nina Yoshida and Yamaguchi, who were funny and touching and fully captured the dance’s playful spirit.

Not at all sweet is The Jewish Wedding, subtitled The Wedding Procession.  (When performed last year, the title and subtitle were reversed, reflecting Yakobson’s attempt to avoid Soviet displeasure by not so obviously presenting a Jewish-themed dance.  Perhaps the change this year reflects that Yakobson’s effort failed.) 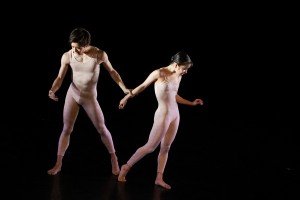 I discussed Yakobson’s background as well as summary details of this ballet last year, and won’t repeat that here. Suffice it to say that it’s another slice of shtetl life, but one that doesn’t evoke visions of a fiddler on a roof. As I described it last year, it’s a brutal little ballet. Yakobson fills his ballet with idiosyncratic but insightful choreography that distills every ounce of narrative to its emotional essence – as did one of his school classmates, George Balanchine.

The characters parade onto and off the stage – a Yenta (here called “Girlfriend”), who introduces the bride’s predicament, three Musicians, and the major characters: the Bride, the Poor Groom, the Rich Groom, the Poor Mother and Father, the Rich Mother and Father, and a Rabbi — after which one or a pair or trio is featured in one of the miniature dances that seamlessly flows through the piece. The leads at this performance, as I recall, were all different from those in last year’s presentation, but the changes had little impact. Miguel Solano was the insipid, self-centered entitled Rich Groom (echoing the characters of his parents), Katerina Schweitzer was an emotional basket case as the Bride compelled to marry a man she doesn’t love, and Almeida’s Poor Groom portrayal was utterly devastating. And Yamamoto may have pulled off one of ballet’s more unique accomplishments, playing a Rabbi and a Cossack on the same program, and making both believable. 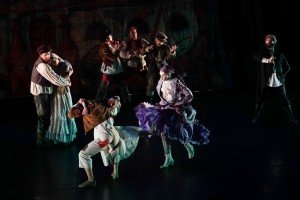 The evening concluded with a repeat performance of Walpurgis Night. This version by Leonid Lavrosky (and also staged by Levitsky and Solovieva) is not only a balletic visualization of the feast of Bacchus, it’s a feast for the eyes. It’s tempting to chalk up this dance’s success as simply a consequence of presenting a stage full of tipsy nubile young dancers and their male counterparts at a frat party of Olympian proportions, but there’s way more going on here. It may not be classical-looking, but this is classical ballet that is overwhelmingly physical without having to rely on tricks – just super technique and execution that invites one to participate either as voyeur or vicarious reveler. 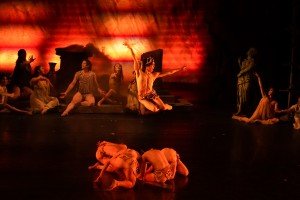 The characters consist of the Bacchanal Couple (which includes the lead Nymph), the god Pan, four Satyrs, three additional Nymphs, four demi-soloist celebrants, and a cast of thousands. And, except for the phony salutations around the stage perimeter that make it look starched and artificial (which I also observed at last year’s performance), it’s all good.

Identifying all the dancers, even those featured, would require a few stiff drinks and a lot of ether space. But I must single out the three Nymphs (Agnew, Brinkman, and Sheptalova) for adding class to the frivolity. Christian Laverde Koenig, the guest artist who portrayed the male in the Bacchanal Couple and whose primary responsibility was to handle the heavy lifting (seemingly endless bicycle lifts and repeated receipt of flying leaps into his arms), also did a fine job with the dancing he was assigned. But the performance belonged to Yamaguchi, as Pan, and Yoshida, the lead Nymph. Each danced these roles last year, and each is an explosive pocket rocket of a dancer. Yamaguchi seemed never to stop moving, or leaping, or tuning at warp speed. And Yoshida, a pint-sized bundle of fearless energy, was his equal. This was non-stop excitement, and the audience response was giddy disbelief, and not a little appreciative awe. I happened to overhear Yoshida’s parents in the audience say that she’s 18. 18?? 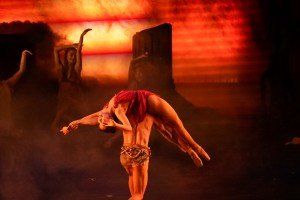 To those who’d not seen GK Ballet previously, this was an eye-opening evening, and one that demonstrates that super ballet performances aren’t the exclusive province of high-profile ballet companies. It’s still the best ballet value in town  – at least for now.