Cutting to the chase, the program that Gelsey Kirkland Ballet presented during its recent run at the company’s new space in Dumbo, which I saw at its final performance on Sunday, was wonderful. This little upstart company doesn’t get the respect, or the acclaim, that it deserves. Yet. But I don’t doubt that it soon will.

Let me get one matter out of the way first. The dancers of GK Ballet, which include company members, trainees, apprentices, as well as students from the Gelsey Kirkland Academy of Classical Ballet, may not be at the level of the best dancers in the world, the US, or New York. Yet. But they make no such contention, and in view of Sunday’s performances (as well as every other GK Ballet program I’ve seen), such an observation is irrelevant. What this company does is to recruit highly talented dancers into the company and the school’s professional training program, thoroughly prepare and challenge them, and present primarily classical ballets at a level of quality that far exceeds reasonable expectations. 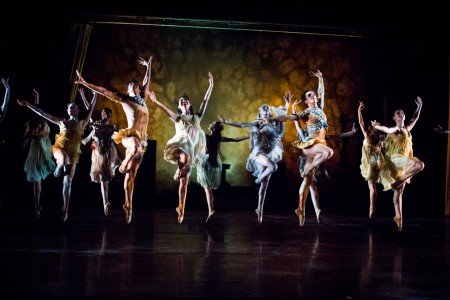 This program, labelled Mischief, Mischief, and More Mischief, consisted of three ballets: a reprise of its production of the classic comic farce Harlequinade, choreographed by Marius Petipa; Leonid Yacobson’s The Wedding Procession; and a version of Walpurgis Night by Leonid Lavrosky. Although the program had many highlights, and all three were superbly performed, the Yacobson piece, the shortest in length, is particularly compelling.

Yacobson (his surname is also spelled in English as ‘Jacobson’) choreographed in Russia when it was part of the USSR, and his ballets are little known in this country. His oeuvre is now undergoing a popular resurgence, with many companies, in the U.S. and elsewhere, discovering his ballets. I don’t know GK Ballet’s motivation for presenting it (I suspect that Nikolai Levitsky, the company’s Ballet Master, and his wife, Vera Solovieva, who were Artistic Directors of the Yacobson Company in St. Petersburg and are now teachers at the GK Academy – and who staged the piece – had something to do with it), but it’s a commendable choice. The Wedding Procession is a gem, and one with considerable significance.

Yacobson is a fascinating figure. He was born in St. Petersburg in 1904, and discovered dance relatively late, eventually being accepted into the St. Petersburg (later the Leningrad) Ballet School, from which he graduated in 1926. (One of his classmates who graduated the same year was George Balanchine.) Thereafter he joined what was to become the Kirov Ballet (now the Mariinsky), eventually focusing on choreography, but his stylized, iconoclastic, non-classical forms of ballet were considered contrary to Soviet cultural orthodoxy (which, ironically, was essentially in lockstep – artistically if not politically – with Russian Imperial cultural orthodoxy), and resulted in his work being disapproved by Soviet authorities, and his being dismissed by Agrippina Vaganova, the Kirov’s director. Being Jewish didn’t help (the anti-semitism at the time was virulent, fueled by Stalin). But he continued to choreograph, ultimately returning to the Kirov to finalize the full-length ballet Shurale, which premiered in 1950. (A pas de deux from Shurale was presented by the Mariinsky Ballet during its recent tribute to Maya Plisetskaya at the Brooklyn Academy of Music.)

Perhaps because they were more suitable for the presentation of his style – or perhaps because they were more portable – Yacobson favored the creation of short, mini-ballets, a collection of which was presented in 1959 under the titular umbrella title: Choreographic Miniatures. When the anti-semitism eased somewhat (a relative term) in the 1960s, Yacobson was encouraged to choreograph and present his work more broadly. One of the ‘miniature’ pieces he created was Vestris, which Mikhail Baryshnikov performed at the Moscow International Ballet Competition in 1969. In 1970, he formed a company, based in Leningrad, called the Choreographic Miniatures Ensemble. He choreographed 15 miniature dances during this period, one of which was The Wedding Procession – somewhat ironically choreographed to Piano Trio No. 2 in E Minor, a 1944 piece by Dmitri Shostakovich, who himself was subject to Soviet pressure, condemnation, and censorship.

Despite the easing of restrictions, and Yacobson’s decision to title the ballet as he did (rather than ‘The Jewish Wedding’, which is now its subtitle), the ballet’s overt Jewish theme was anathema to the cultural authorities, and it was banned. My understanding is that it was not performed again until 2003 – by The Leonid Yakobson State Academic Ballet Theater of St. Petersburg. 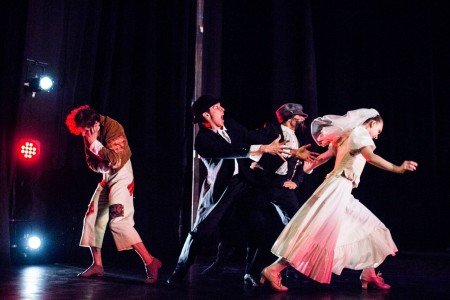 The short piece (I didn’t time it, but I doubt it lasted more than ten minutes) tells of a Jewish wedding where the bride is compelled for reasons unstated to marry a rich man she doesn’t like, and to abandon the poor man she loves.  It sounds a little like Antony Tudor’s Jardin aux Lilas, but the characterizations here are more emotional snapshots rather than deep psychological studies. (I’ve seen references in publicity materials to the bride having been pregnant by her poor lover, but that is not clearly presented in the ballet, and the piece has no indicated libretto.  Regardless, it’s her love for the poor man that appears to fuel the despair captured in the ballet, not that she may be pregnant.)

Much as Balanchine did, Yacobson distills the story to its essence, focusing on the emotional burdens of the characters. The choreography looks somewhat forced and artificial, but this fits with Yacobson’s concept, and the nature of his choreographic style. His movement has aptly been described as “plastic,” with exaggerated acting filling in the depths of character. To that I would add expressionistic. Many of the images (the piece is somewhat of a collage of semi-connected discrete moving images) brought to mind the work of Edvard Munch, whose art reportedly influenced the development of German Expressionism, and whose “The Scream” seems to permeate the despair that Yacobson depicts. And although it may be a miniature, it is filled with detail.

As the piece begins, the characters (individuals or small groups of two or three) parade stage left to right downstage, and, after entering the wings, turn around and continue the procession upstage. There they remain in place, a relative distance separating the members of the wedding procession from each other. Even if you hadn’t read the brief program reference to the bride having to marry the wrong man, you know immediately who these characters are. You know also that although the characters may have emerged from a Jewish shtetel, the wedding’s three musicians, who are part of the procession, won’t be playing Sunrise, Sunset at the reception. This is a brutal little ballet.

The procession includes many characters, who at times move from their positions and briefly interact with the Bride, but the essential players are the “real” lovers, the Bride and the “Poor Groom.” Their agony is palpable in the tortured looks on their faces, and in the duet of passionate hopelessness choreographed for them. Kailee Felix (a member of the GK Academy’s Professional Training Program and a young ballerina who, based on her performance here, has enormous potential) as the Bride, and Anderson Souza as the Poor Groom, did exceptional work to make Yacobson’s choreography, and their torment, real, and to break viewers’ hearts.  Their climactic duet, before she is pulled away to rejoin the Rich Groom in the procession is shattering. And the concluding image of the Poor Man’s body twisted in quiet anguish is unforgettable. It’s an extraordinary piece of work, and an equally extraordinary glimpse into a rarely seen corner of Russian ballet history. 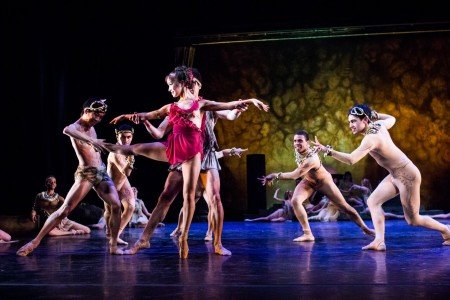 Walpurgis Night, an excerpt from Gounod’s opera Faust, relates the Bacchante, a celebration of wine, nymphs, satyrs, patricians, virgins, and debauchery. A version choreographed by Balanchine, titled Walpurgisnacht Ballet, is in New York City Ballet’s current repertoire. Except for the heavy string (as in heavy metal) music and the opportunity to see ballerinas fly across the stage with their hair down, I never thought much of it, figuring that it was another effort by Balanchine to keep the men in the audience awake.

This Lavrosky version (also staged by Levitsky and Volovieva) does a better job of it. It looks more like a real depiction of a bacchanalia (not that I’m familiar with one), and includes some knockout choreography – particularly for the lead Bacchanal and Pan, here danced by Nina Yoshida and Koki Yamaguchi.

It’s tempting to think that Yoshida, only a company apprentice, was given the role of the lead Bacchanal because she’s so tiny, and there are so many occasions when she must be lifted, mostly as dead weight, by the Lead Patrician (here played with authority as well as strength by Gustavo Ramirez – a company trainee). But that would be wrong. She was commanding and astonishingly confident throughout, virtuosic in her turns, leaps and pointe work. 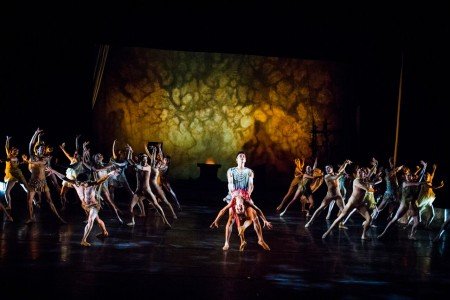 But she was equaled by this production’s Pan. Yamaguchi, who seems almost as short in stature in Yoshida, is huge in ability. In this production, Pan mostly jumps, leaps around the stage, and turns. But the jumps, leaps and turns are spectacular, and Yamaguchi is dancing dynamite. He circles the stage like a rocket, and his turns a la seconde are the fastest I’ve seen, ever, executed with no significant sacrifice of technique.

I can’t judge the depth of their talent, but their performances here are comparable to those that one might expect from more recognized ballet superstars – except they don’t yet know how to milk applause. And the level of accomplishment doesn’t stop with Yoshida and Yamaguchi. This is a visually exciting, dynamic, and appropriately sensuous piece of choreography, given performances by the entire cast that deliver it all. The standing ovation the company received on its conclusion was well-earned.

Although it’s apparent that I enjoyed GK Ballet’s performance (which included luscious costumes and sets originally created for New York City Opera’s production of Mephistopheles), I have one negative observation. When the supporting corps stops moving and frames the featured or lead dancers, they interact with each other around the perimeter of the stage. That’s to be expected. But here the interaction is by rote, with fake lasciviousness represented by programed and meaningless arm movements. It’s the same type of background noise as in the Bolshoi’s productions of classical ballets such as Swan Lake and Don Quixote, where arms and tankards are raised to salute whoever happens to be featured centerstage at that time. It makes the ballet look old-fashioned, and should be modified to fit more contemporary visual sensibilities.

I won’t dwell at length on Harlequinade, which opened the program and which I’ve previously reviewed. Dawn Gierling Milatin repeated her fine portrayal of Columbine, Sabina Alvarez danced a vibrant Pierette, Souza an appropriately mournful and not-nearly-as-dimwitted-as-he-seems Pierot. But the performance’s centerpiece was Johnny Almeida’s exciting and appropriately over-the-top Harlequin.

Don’t look now, but that upstart little ballet company that many considered a vanity project for Kirkland and her husband, co-Artistic Director Michael Chernov, has become the little ballet company that could, and does. It may not be at the level of other major New York companies. Yet. But if the performances reflect the caliber of the teaching and the quality of the students at the affiliated school, as logically they must, GK Ballet won’t be going away any time soon. Its programs should be a destination – and, at least for now, tickets to the company’s programs are the best ballet value in town.