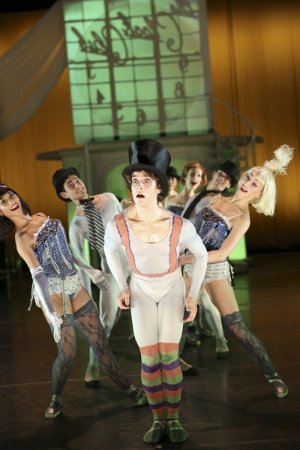 The thought crossed my mind as I watched the world premiere performance of Michael Chernov’s new ballet, Stealing Time, presented by the Gelsey Kirkland Ballet at the company’s new/old digs (it was formerly St. Ann’s Warehouse) in Dumbo. Even after having sat through it, I have little understanding of the ballet’s story and even less of the meaning of its title. But after deciding that trying to decipher the story was stealing time from enjoying the production, and upon seeing it as something other than the narrative ballet it’s supposed to be, I succumbed happily to the inventiveness, cleverness, relative quality, and outright fun of it all. And how can you not like a ballet with lead characters named Venus, Algae, and Guttman. (Sounds like a doomed law firm.) And one named Who.  (Not a question – the name of the character.)

I suppose there are many who would consider Stealing Time to be a hodgepodge pastiche (a low-brow Sylvia, maybe) that makes no sense – and to an extent that’s true. Overall, it looks like Prodigal Son might look if cross-pollinated by the Broadway musical Cabaret, with some Le Corsaire and Balanchine’s Stars and Stripes in the genetic mix, liberally peppered with Charlie Chaplin allusions, Cirque de Soleil acrobatics and Soviet-style ballet athleticism. But the choreography and staging is so entertaining, and the dancers so capable and enthusiastic, that I didn’t much care. And strange as it all seemed to be, I enjoyed seeing what Chernov and co-choreographer Akop Akopian dreamed up. Everything here was carefully planned, using available resources (space and finances) imaginatively, and stretching the dancers, many of whom are students at the Gelsey Kirkland Academy of Classical Ballet, to their limit and beyond. As in other GK Ballet productions, these dancers, the company dancers as well as the students, had to have been drilled to within an inch of their lives, to the point where they didn’t look anywhere near as petrified as they should have.  Their execution throughout was virtually flawless.

Viewed without benefit of a program synopsis or scene descriptions that make any sense (the scenes are ‘described’ in the rough equivalent of Haiku), the story tells of Venus and her husband Algae. (Never heard of ‘Algae’? I hadn’t either – so I Googled ‘Venus’ and ‘Algae’ to find some link to the Greco/Roman myth that must have formed the basis for the story. I couldn’t find anything – except that Venus was married to Vulcan, and Algae was a Greek goddess of suffering.) And then there’s Venus’s faithful servant/changeling/jill-of-all-trades Who. Or maybe she’s Algae’s girl Friday/fairy godmother/traveling companion. Algae marries Venus, but unlike the living green slime of the same name doesn’t stick around very long. He’s more like a dandelion in the wind. Algae departs from some place (an Olympian train station, perhaps) for…somewhere, looking for…something, eventually finding a den of iniquity called the Clock Club, run by some slimy guy named Guttman who Willkomens him and introduces him to his Celebrity siren. But after enduring considerable suffering (aha! the Greek connection) Algae gets clocked. And Who dies. (Not a question – the character.)  Or maybe it’s the other way around. Then there are these pirates, who show up after the good ship Utopia sails off to…somewhere.  Anyway, Who (who has no apparent connection to the famous Abbott & Costello comedy routine) rescues Algae and returns him to Venus – except he has to rope-climb up some red drapery overruns that have a nasty habit of sticking to the set to get to her. And they all live happily ever after, or at least until the wind blows again.

I get that the narrative, such as it is, goes from reality to dream to reality, but none of it is delineated: it all looks unreal. So forget about the story.  If you focus on what the dancers are doing, the quality of the production as a whole, and that the music and set pieces echo Weil’s musical and physical journey (which Chernov mentions in a program note), it’s all somewhat understandable. My theory is that Algae is representative of Weil, with Venus his divine artistic inspiration.  The Clock Club (inside and outside) are metaphors for life in Berlin (or perhaps Mahagonny). The travel transitions (train; ship) echo Weil’s departure from Nazi Germany to Paris, and then from Europe to America. Who knows what Who is supposed to represent, if anything or anyone – though connections to Berthold Brecht, Weil’s collaborator for a time and whose connections to Chaplin are documented, is a possibility.  Or, by emerging from a suitcase and being present wherever Algae goes (and enhanced by the Chaplin reference), Who could be, at least in part, an allusion to Weil’s baggage – his Jewish roots. 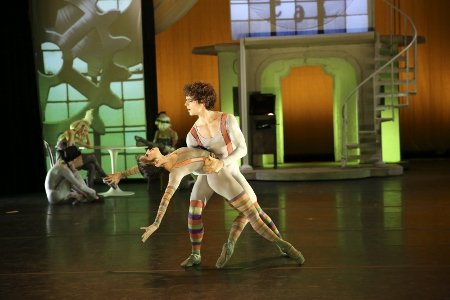 Particularly striking in Stealing Time are Chernov’s sets and costumes. The opening tableau, for example, the birth of Venus, is strikingly impressive, as Algae slides down a billowy cloud from Venus’s heavenly pedestal. And having dancers individually enmeshed in white coverings, or, later, groups of dancers connected by white cocoons, or briefly having a circle of dancers reduced to their white gloves are all examples of the ballet’s stagecraft and ingenuity, even if similar such visual tricks have been used before. But smaller ‘throwaway’ images are yet more inspired. For example, Algae is twice seen lying atop a bass, once with Who beside him as he rests, and once dragging him back to Venus (the bass is used like a moveable coffin). The bass is a clever connection to Algae’s (Weil’s) musical artistry; similar, in a sense, to Apollo’s lyre.

The choreography is varied throughout and consistently interesting.  There’s no attempt here to create a new ballet language (I would not have expected any such iconoclasm from a ballet that has Gelsey Kirkland as its Artistic Advisor) – existing vocabulary is ‘just’ cleverly put together, with added quirkiness demanded by Weil’s music (e.g., slinky body movement grafted to classical vocabulary in the dance’s concluding scenes). Aside from the first few scenes, the ballet’s pacing is admirable, moving from ‘mass’ scenes to a smaller focus and back without stopping to catch a breath. Even the Soviet-era athleticism (the pervasive lifts; manipulating the ballerinas as if they were circus artists) was integrated seamlessly.

Perhaps most important from the point of view of Chernov’s concept is that one can see, as well as hear, the stages of Weil’s musical transitions. Act II, for example, where he (as Algae) presumably sails off to and arrives in Utopia (America), looks and sounds completely different from the Weimar Republic of the bulk of Act I.  I would have appreciated identification of the specific Weil music that Chernov used, but that’s not essential.

The most significant character in the piece, as well as in the performance, is Erez Ben-Zion Milatin’s Algae. A pint sized dynamo who has appeared in several other GK Ballet productions, Milatin here is quite good in every respect; technical execution, athleticism, acting (he’s the only one of the bunch who has some character development), and, not the least, strength: he lifts and flips ballerinas like toothpicks.

Of the other major characters, Johnny Almeida’s Guttman, even though I couldn’t figure out who his character was supposed to be (other than a virile form of the Cabaret MC), was very well danced also, with as much attack and sheer strength as Milatin, and he paired well with his star Celebrity, Sabina Alvarez, who wasn’t given much choreographic variety (the choreography for her in the Clock Club scene was similar to what she demonstrated earlier in the piece), but what she did she did very well, with the seductive but distant sensuality appropriate for a tempting but unattainable siren.  Nina Yoshida’s Who was the most delightful character in the piece:  part Charlene Chaplin, part Marcella Marceau, part rubber band, her deadpan presence was always intriguing, even if intentionally inscrutable.  Dawn Gierling Milatin’s Venus had less to do, and her delivery is relatively wooden – but that appears to be what the ballet calls for.  But she deserves particular kudos for allowing herself to be manipulated by her male handlers without hesitation, though perhaps with eyes wide shut.

Stealing Time does not have the appearance of a finished ballet. There are kinks that need to be worked out – aside from that opening tableau, the first few scenes are dull. And other than as representative of the passage of time, the ‘clock’ concept doesn’t work for me at all. Nevertheless, Stealing Time is a rarity: it’s original.