As part of a visiting artist series at the University of Maryland, Senegalese/French dancer, choreographer, and teacher Germaine Acogny performed a 37-minute solo created for her by Olivier Dubois, director of the Ballet du Nord, set to Stravinsky’s Le Sacre du Printemps (The Rite of Spring). I’m going to assume that readers have some familiarity with the original Ballets Russes production of the same name choreographed by Nijinsky depicting pagan rituals and human sacrifice to Stravinsky’s jarring score. The Rite of Spring famously caused quite a stir at its May 1913 premiere. A few years ago, I saw multiple productions in honor of the work’s 100-year anniversary. I’m not sure exactly how this piece by Dubois fits in with others I’ve seen centering on this theme, as according to the program notes, Acogny’s solo is merely the second installment of a 12-part series based on The Rite of Spring. Standing alone, however, Mon Élue Noire definitely rivets.

Acogny, who has been called the queen of African dance, is a monumental presence. In her 70s now, she moves with assurance and power. Mon Élue Noire begs viewers to watch, and watch closely. The work begins in darkness. Acogny appears at the back of the stage, her face illuminated by a thin flickering flame. She then extinguishes the flame and disappears, only to reappear in a different spot. Her face recedes and materializes a few times. Gradually, the audience catches glimpses of movement. After a longer pause, Acogny emerges stomping barefoot in an elevated narrow box with see-through sides that’s about twice her height. She has a pipe in her mouth, and she smokes. From within this cage she taunts and haunts.

Dressed in black pants and a black bra, with a rectangle of black fabric that serves alternately as a head scarf, a cape, and a skirt, Acogny changes moods along with the moody music (she later changes the bra from black to white). Her dancing is personal and provocative. As lights flash and the music clashes, Acogny deftly navigates from stillness to constant movement, from breeziness to weighty seriousness, and from hostility to humor. With her back to the audience, she might have been mixing a witch’s brew. Leaning slightly forward, her hips go back and forth in rhythm to the blaring music. 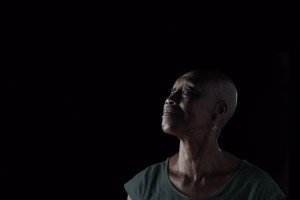 Sometimes she mouths words, a silent incantation or prayer.  Other times, she’s not silent. She laughs and laughs, loudly and emphatically, staring directly ahead in a challenging stance. Later, she recites something in French. Because I don’t understand French, all I could make out was “colony” and “colonization.” She also screams, thrusting her pelvis into the space in front of her, rapidly pumping, like a man madly demonstrating his manliness. Acogny is fearlessly disturbing, just like the cacaphonous music.

African dance elements are naturally part of her movement. Her arms, bent, fly up from her side, and her legs, similarly bent, step up and press back into the ground. Acogny is part soldier, part lion. In one sequence she struts, gesturing and vocalizing like a machine gun. In another sequence, on her knees, one long arm crosses in front of the other, and she seems to pace like a large cat on the prowl. Some of the dancing is violent and resembles martial arts. She’s strong enough to make the floor of the platform on which she dances bounce.

There’s an unrelenting staccato momentum to much of Mon Élue Noire and to Stravinsky’s score. This makes the quiet, relaxed moments stand out. Toward the end, Acogny reclines, smoking her pipe, the tobacco smell pungent and sweet. The closing minutes involve opening the floor beneath which Acogny had been dancing. She descends and stands so that only her upper body is visible. Plumes of white smoke fill the chamber, and she smears white across the walls that previously had been her floor. When she turns to face the audience her palms and torso are streaked with white. Finally, she disappears again, lost in misty puffs of dry ice.

I’m not sure whether she’s a superhero, but in Mon Élue Noire, Acogny shows off the skills and technique of a veteran dancer who truly knows how to engage an audience.