There are a few rules you need to know before seeing Matthew Bourne’s The Red Shoes. First, familiarize yourself with the story in advance because the program won’t tell you, and even though Bourne has modified the story in many ways, having a baseline helps. Second, don’t bother trying to figure out who the identified but subsidiary characters are, because many of them look alike (and like the leads), and aren’t important to know by name anyway. Third, brush up on potential Hollywood allusions – there are lots of them. And perhaps the most important rule: there are no rules. 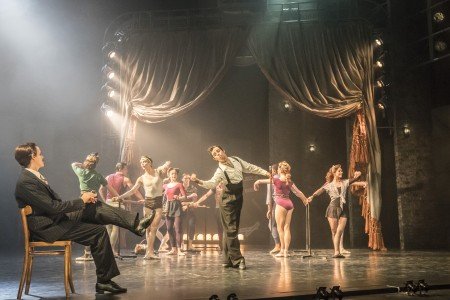 The Red Shoes can be maddening – because it’s as bad as it is, and because it’s as good as it is. In other words, it’s typical Bourne: one minute you dislike it intensely because of its shameless self-indulgence; the next you love it … because of its shameless self-indulgence. And if you go expecting to be reacquainted with the 1948 movie, you’ll be disappointed. Bourne’s The Red Shoes is Big and Brash and Hollywoody, but just doesn’t have the film’s sensibility or its heart, and maybe there’s no way it could (but see Christopher Wheeldon’s An American In Paris, which did). And I can say all that and still say, in the end, that I liked it … because it’s not a movie; it’s Broadway.

The first half of the first of two acts left me dazed. It just moves too fast, travels from place to place without advance narrative notice or purpose, and since there’s no dialogue, following who’s who and what’s what is a chore. And that awful, screechy music: before I saw that Bourne had curated his score from a variety of compositions by legendary Hollywood composer Bernard Herrmann, all I kept hearing, and consequently seeing in my mind, was Janet Leigh’s showery death, and all I kept feeling was dizzy. [Herrmann is perhaps most famous for his scores for many films by Alfred Hitchcock, including, notably, Psycho and Vertigo.] More importantly, the cleverness of the set – a revolving stage that alternates between stage-to-audience and audience-to-stage (and backstage) views – distracts from the choreography … although at times that’s not such a bad idea. And some of the set’s throwaways (I caught a “painting” of what could have been a Ballet Russes poster/photo hanging over the fireplace in Lady Neston’s drawing room, and there were probably many I missed) might alone be worth the price of admission. 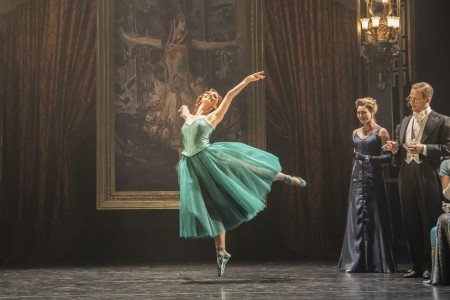 But about halfway through (much like his Sleeping Beauty, which was in residence at City Center exactly three years ago), the all-dance musical starts to sing. And I can pinpoint the moment when the story and Bourne’s theatricality magically come together, at least for me: when Lermontov pulls Victoria Page into the moonlight/limelight over Monte Carlo (a blessed respite from the insipid beach blanket bingo Monte Carlo scene that precedes it) and says, silently but clearly, “I’m gonna make you a star … baby.”

The nonstop action after that is just as crazy as it was earlier, but now, in a bizarre sort of way, it works because the narrative and characters have become clear, and those allusions become less annoying and more fun. It’s Serge Diaghilev meets Busby Berkeley, Ballets Russes meets Broadway, Cinderella (Wheeldon’s) meets Hans Christian Andersen (the movie) meets 42nd Street, and Moira Shearer meets Judy Garland – no, not Vicky Lester (that’d be a stretch even Bourne wouldn’t take): Dorothy Gale, when the Red Shoes temporarily become Ruby Slippers. 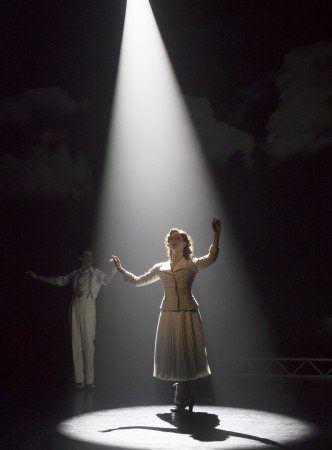 If the story isn’t familiar to you (and apparently it’s not to many – I overheard several attendees wondering, aloud, what this show was all about), read it – or better, see the 1948 movie. I won’t describe it here. Suffice it to say that the story is about more than a dancer with a dream who unexpectedly becomes a star (here because the “star” ballerina is suddenly injured, a la 42nd Street, rather than by insulting the smitten impresario by announcing her engagement to her wealthy no-good boyfriend, as in the original). It’s a cautionary tale about values – and that becoming a star, and becoming obsessed with being one (impelled by the “red shoes”) isn’t the solution to a problem; it is the problem.

The show’s climax, the closing scene of Act I, is the staging of the “Red Shoes Ballet” (the adaptation of the actual Andersen story), and it’s a technical tempest. Literally. As it evolves (sets and costumes by Lez Brotherston; lighting by Paule Constable; projection by Duncan McLean), the black and white staging (except for Page’s skirt and, of course, those shoes), complete with a dropdown Hollywood-style ultra-30s-modern white “curvey” set that frames the action, gradually increases in speed as the red shoes force Vicky Page to dance with increasing frenzy. Concurrently the projection that simulates the ballet’s “outdoor” location (like one of those antique “moving lamp” scenes, but in black and white and on steroids) itself seems to move as if buffeted by gale-force wind, exponentially augmenting the sense of out-of-control speed. I expected Vicky to suddenly grab Toto and proclaim that they’re not in London anymore (and I suspect that the obvious allusion to the Wizard of Oz filmed tornado was not accidental).

Unfortunately, the ballet’s moving projection also brings to mind other images. The presence of a bare tree as some sort of sheltering presence / representation of better days, the sudden appearance of several blackbirds flying overhead, and the frenzied music make one think of a Hitchcockian incarnation of the Act I conclusion of Wheeldon’s Cinderella, albeit without that production’s complexity or Basil Twist’s wizardry. [And instead of losing her glass slippers, she couldn’t get rid of her red shoes.] But whether it’s remindful of something else or not, it’s successful stagecraft. And it includes the show’s best choreography.

From that point on, most of The Red Shoes is denouement. Bourne seems to recognize this by moving the action quickly and without stopping for unnecessary exposition. Its sudden end is similar to the original, but the lead-in to it is much more unanticipated, making the ending seem to come out of nowhere. Regardless, the startling image of a train engine emerging from behind the upstage curtain like some sort of vengeful god (less elaborate, but much more dramatic, than similar imagery in Alexei Ratmansky’s Anna Karenina) is appropriately powerful. 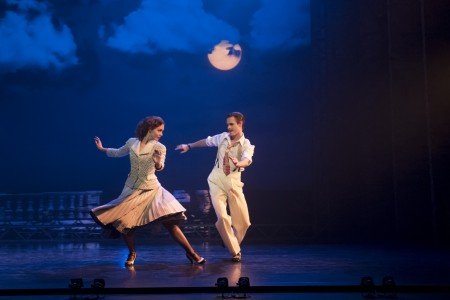 As Victoria Page, Ashley Shaw is, physically, very remindful of Moira Shearer, although the theatrical “stage distance” to the audience, compared to the intimacy of film, made her characterization appear less compelling than it probably was. Dominic North was fine as Page’s struggling composer boyfriend Julian Crastner, but he was a little too milquetoasty for my taste (I suspect that the alternating cast, New York City Ballet’s Sara Mearns and American Ballet Theatre’s Marcelo Gomes, will enliven both the portrayals and the crispness of the dancing significantly). Sam Archer’s Boris Lermontov looked a cross between Diaghilev and Broadway producer David Merrick (42nd Street), and was the glue that held the show together. In subsidiary roles, Glenn Graham was effectively lecherous, self-absorbed, and just a bit dangerous in an uncertain sort of way as Ballet Master Grischa Ljubov; Michela Meazza was appropriately icy as Prima Ballerina Irina Boronskaya, and in the role danced in the film by Robert Helpmann, Liam Mower was the highly capable but at times over-the-top Premiere Danseur, Ivan Boleslawsky.

By all means see Bourne’s The Red Shoes. Its awesome and pervasive theatricality is sufficient enough to outweigh that it left The Red Shoes‘ soul, and the film’s heart, somewhere on the cutting room floor.


All Articles (per month)