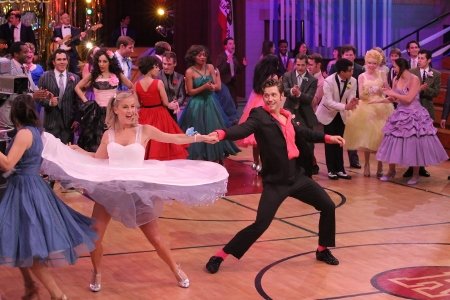 Having nothing better to do Sunday evening than watch TV – well, I had plenty to do, but nothing that I wanted to do – I decided to catch Grease: Live. I knew that Julianne Hough and Carly Rae Jepsen were in it, and anything with either of them couldn’t be all that bad. So why not?

It blew me away.

From the first minute, the boundless, raw energy of the production blasted through my old 36” black box TV with the 10 foot deep picture tube, grabbed me and wouldn’t let go. I can only imagine what it looked like in HD. I even sat through the commercials – I didn’t want to take a chance missing any part of it. Soup to nuts, this production was the finest live TV presentation of a musical that I’ve seen. Let me expand on that a little, since there haven’t been all that many live presentations of Broadway/movie musicals. It was the finest live production of any TV entertainment that I can remember, and I’ve been around awhile. And it succeeded in doing what I’ve previously written TV could never do with theatrical performances either broadcast live or recorded and broadcast later, including “Live from Lincoln Center” and “Great Performances.”  Despite the undeniable gifts that these programs provide, it’s never the same as actually being there.  But Grease: Live pulled me in. I wasn’t just watching from a distance; I could feel it. I was there.

Maybe it was a little busy-looking at times, and every so often I thought I was watching a staging out of Dancing With the Stars. And I could have done without Mario Lopez, who was fine as a sleazy Dick Clark wannabe, doing extra (extra) duty as an on-the-scene commentator. But when measured against the overall non-stop powerhouse excitement level, such observations are insignificant. The production’s inventiveness and staging decisions were brilliant – the production professionals took chances (an integrated, live audience??), and they worked. All of them. And although it must have been rehearsed to near death, it looked spontaneous. It was a musical within a theatrical performance within a musical – musical theater on multiple levels – and I can’t think of anything about it that could have been better.

Not that there weren’t little problems. I watched as a wheel of one golf-cart used to transport cast-members from one set to another rolled up and over a curb. It could have been a disaster, but the driver kept it upright. And since so much of it was outdoors, it’s a good thing it didn’t rain. Wait – it did – they were prepared for it, and still pulled it all off – cleverly and with panache (El Nino indeed!). There also was this thirty second sound glitch – for which I’m grateful, otherwise I would have bet that it was all pre-recorded – it couldn’t possibly have been that flawless. But even if parts were taped, it doesn’t matter. It was a fabulous achievement. 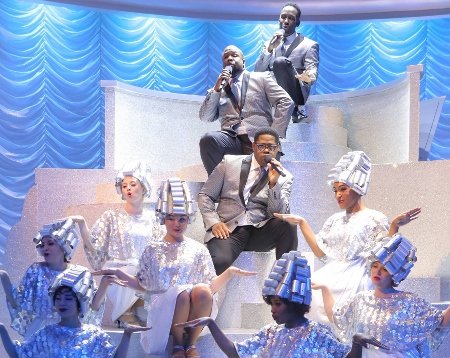 Every lead performance was a gem. Hough and Jepsen, as Sandy and Frenchy, exceeded already high expectations. Of course we knew Hough can dance. But she can sing! (even through some scratchy/foggy audio). Her rendition of Hopelessly Devoted to You was delivered passionately and with melodic nuance that went far beyond imitation.  In a very short time, I forgot that she wasn’t Olivia Newton-John. Jepsen, in the role originated by Didi Conn (who returned for this production as the waitress, Vi), was appropriately daffy and dreamy, and the song added for her, All I Need is an Angel, segued neatly into the Boyz II Men rendition of Beauty School Dropout.  Vanessa Hudgens as Rizzo was flat out fabulous, and her delivery of There Are Worse Things I Could Do was heartbreaking and life-affirming at the same time. Her performance was even more gutsy than it looked, as I learned later that her father had passed away the previous day.

As Danny Zuko, Aaron Tveit, who, for me, came out of nowhere, was a keg of dynamite with a deeply hidden heart. He may not have been as suaveee as John Travolta, but to me he was more believable as someone Sandy might actually care about. Keke Palmer’s Marty Maraschino seemed a bit over the top, but in context it worked marvelously (as did that costume/scene change within “Freddy My Love”), and Carlos PenaVega, reprising the dancing talent he demonstrated in DWTS, was pitch-perfect as Kenickie. I could go on…suffice it to say that there wasn’t a weak link in the bunch, including in non-dancing/non-singing roles. And the few 21st century updates that I saw or sensed (e.g., casting or script) were handled appropriately and effectively.

The overall technical and logistical complexity of the production defies belief, and the fact that you knew it was a Herculean effort as you watched it unfold, and that this in no way interfered with the enjoyment of what appeared on screen, made it all the more miraculous. The choreography by Zach Woodlee, who was the choreographer for TV’s Glee, dominated this production even more than the technical wizardry and the abundant individual and group singing.  It was not just galvanizing and effortlessly joyful, but, considering its period limitations, really good. The mass dance sequences (the Dance-Off – Born to Hand Jive; and the celebratory conclusion – We Go Together) were supposed to be spectacular, and they were. But I appreciated the restrained 50s pop-classicism that infused the ‘smaller’ scenes even more. I suspect that live-TV director Alex Rudzinski also had something to do with why it looked as good as it did – he’s the director of DWTS.

The grin on my face that began with the first minute and continued solidly for the next three hours is still there – just from replaying it in my mind.  Certainly a good part of why Grease: Live was as good as it was is because the film on which it’s based is a movie musical classic. But to me, Grease: Live had something the film couldn’t have. Grease: Live was alive!