I was floored when I saw Grupo Corpo for the first time a few years ago, and I remember that I gave the company a glowing review. Therefore, I was very excited to see this Brazil-based contemporary dance company again in the DC area. This time around, I still enjoyed the performance, but my enthusiasm for the works on the program at the University of Maryland was mixed.

Grupo Corpo presented two works in honor of the company’s 40th anniversary. The first work on the program, Suite Branca, was choreographed by Cassi Abranches, a former Grupo Corpo company member who is an emerging choreographer. This was the work I preferred. The dancers wore all white, variations of leotards, t-shirts, tights, shorts and pants (costumes by Freusa Zechmeister). The scrim appeared to be made of crumpled paper (scenography by Paulo Pederneiras) that changed with the lighting (by Paulao and Gabriel Pederneiras). The dancers also wore what looked like a type of ankle-high jazz shoe in white.

Notably, the dancers’ muscular bodies were highlighted, and there was no hesitation to show the dancers’ round rear ends from all angles and celebrating all proportions. The attractive dancers moved with purpose and precision. Their expressions were largely blank, like models on a catwalk. Over and over, a movement pattern repeated, but moods changed. Dancers leaned deeply forward and back throughout the work. They also shifted their shoulders to and fro, freezing in a pose for a moment, reminding me of hip-hop dance. When the entire company was on stage, moving at the same time, the effect was especially powerful. 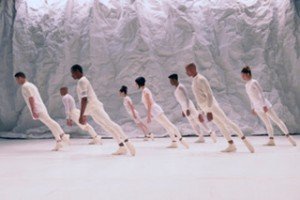 Much of the appeal of the carefully crafted Suite Branca was in the repetition. The dancers repeated a lot of the same phrases, but they altered dynamics and direction. The movement married social dance with ballet, club dance with studio exercises. It made me want to get up and dance! Hips lunged back and forth, side to side, but the torso often remained perfectly erect. And the arms and sharp knife-like lifts frequently resembled those you’d see in ballet. It was an intriguing amalgam. And seen again and again was the steep diagonal of a body catapulted forward but rooted to the ground. Playing with balance, momentum leading to almost falling, was a theme.

Another repeated image was one dancer standing straddling another who was perpendicular and flat on the floor. I found the movement innovative, daring, and playful. I particularly appreciated how bodies were celebrated, how the stylized choreography gave the impression of exuberant coolness. My only criticism is that toward the end of the work when dancers took their deep leans into falls to the floor, they did so far too cautiously. Grupo Corpo could use a lesson from Elizabeth Streb concerning how to dramatically move from upright to nearly face planting into the floor.

The second half of the performance, also in tribute to Grupo Corpo’s 40th anniversary, didn’t sustain my interest. Dança Sinfônica, choreographed by Rodrigo Pederneiras, seemed to meld parts of past works for the company, and the music by Marco Antônio Guimarães, seemed to do the same thing — take excerpts and try to fashion a united whole. If I was familiar with the company’s history, I might have perceived things differently, but the lack of a discernible storyline was a detriment. Indeed, Dança Sinfônica came across as multiple bits and pieces, with constantly changing intentions and musical themes. It was choppy and confusing. 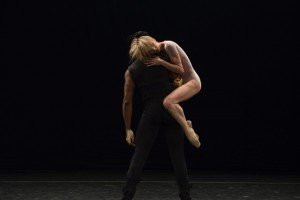 The costumes, again by Zechmeister, rich blood red velvety short-sleeved leotards for the women, and all black for the men, popped. One female dancer, who danced in a sensational duet, wore a pale peachy shade. The duet was the work’s indisputable strong point, largely because it seemed complete, rather than just a snippet of something. The woman wrapped herself into a fetal position, knees to chest, and was held aloft tightly in that position by her male partner. The two intertwined danced intimately, the woman unfolding like a bud beginning to bloom.

One striking movement that was repeated and helped to hold together an otherwise disjointed piece was a walk wherein a man held a woman upright, her feet resting on his hands outstretched in front of his thighs, she facing ahead and he stepping backward. The choreography rapidly moved from tough to tender, from animalistic to human, and the images were mostly fleeting. At the end, during the curtain call, the backdrop suddenly morphed into a colorful collage of photos from the company’s 40 years. I was reminded of being subjected to a slideshow of family memories when the family isn’t your own. Dança Sinfônica was a little hard to follow and connect with.