I read in advance of the performance of Hamburg Ballet’s The Little Mermaid, choreographed by Artistic Director and Chief Choreographer John Neumeier, that the production was unlike the Disney film of the same name — dark rather than happy. Indeed, the Hans Christian Andersen fairy tale, upon which the ballet is based, is dark. Disney’s upbeat film version may be well known in the United States, but it departs significantly from the original story. Neumeier’s The Little Mermaid, commissioned by The Royal Danish Ballet to commemorate Andersen’s 200th birthday, premiered in Copenhagen in April 2005. Given that background, one would expect the ballet to adhere more closely to Andersen’s tale than Disney’s perky film, and it does, of course. But Neumeier takes his own creative liberties with the story, and The Little Mermaid he delivers is a stunning, worthy tribute. It won’t have you exiting the theater in joyful bounds due to its somber, sometimes creepy content, but it will remain seared in your memory. 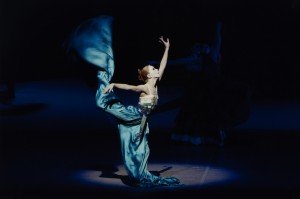 Silvia Azzoni as The Little Mermaid, photo by Holger Badekow

Visually, The Little Mermaid is a gorgeous treat on every level. The tale may be heartbreaking, but the beauty of the costumes, set, and lighting design, all credited to Neumeier, made my heart sing. It was helpful to have multiple elements that lifted the heaviness of the doomed romance and loss that permeate the ballet. From the rose pink bridesmaid dresses and matching pillbox hats, to the spunky shirtless sailors, to the diaphanous wide-legged pants reminiscent of Japanese hakama of the undersea inhabitants, to the lovely 1930s party gowns and colorful cruisewear, I was completely captivated by the costumes. The set design also struck all the right notes — particularly the art deco notes, appropriate to the period in which Neumeier’s ballet is placed. Also perfect were the underwater sequences, in which glowing rope waves hovering above the stage marked the territory between the ocean and the world beneath. Ships, with smoky dry ice billowing as steam, sailed along the surface, or sank upside down to the ocean floor in a storm.

The bottom of the sea is magical and features “Magical Shadows,” men clad in all black who, like in bunraku (Japanese puppet plays), assist in moving the characters. The silky long wide-legged pants on The Little Mermaid (the superb Silvia Azzoni), extend beyond her ankles, so that when she’s lifted into the air by the three Magical Shadows, and she shimmies her hips, the excess fabric of the pants form a fishtail. At other points, via the aid of the Magical Shadows, the namesake mermaid’s pant bottoms are positioned by hand into her signature tail. The undersea costume colors, mainly navy blue, violet, and turquoise, recall the sea, as do the slow sways of the dancers who compose the sea itself. 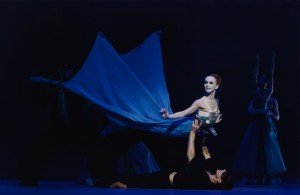 Silvia Azzoni as The Little Mermaid, photo by Holger Badekow

The Little Mermaid, however, doesn’t begin in the sea, but on a ship, in a prologue that introduces “The Poet” (Lloyd Riggins), a sad but dignified gentleman, who represents Andersen the author. In Neumeier’s imagining, The Poet creates The Little Mermaid, the character, out of his grief at the loss of his relationship with a male friend, Edvard (Carsten Jung), who grows distant upon marriage. The Little Mermaid, inevitably perhaps, like her creator, also falls for and suffers over the loss of The Prince (Jung), who looks exactly like Edvard, and just like Edvard becomes out of reach once it’s clear his love belongs to The Princesss (Carolina Aguero). The parallels are readily apparent, and so the uniting in their grief of The Poet and The Little Mermaid at the ballet’s end, where these two characters move from tortured souls to hopeful ones, is especially poignant.

The ten scenes and prologue of Part 1, prior to intermission, dragged a little for me, and left me wanting more in terms of showier dancing. Given that The Little Mermaid is either legless or new to her legs, however, it makes sense that during Part 1 she doesn’t perform, for example, dozens of pirouettes. Only the sailors and naval officers in Part 1 display heart-racing athleticism. Thankfully, Part 2, after intermission, had the dancers moving the way I like to see professional dancers move. The choreography stepped it up a notch in terms of complexity and challenge, and The Little Mermaid, now more used to her human lower limbs, makes more impressive use of them. 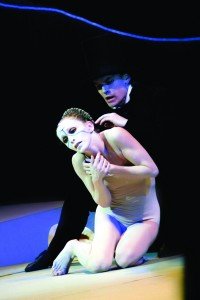 Silvia Azzoni as The Little Mermaid, photo by Kiran West

The one thing I didn’t like was the music, by Lera Auerbach, which was repetitive, even commonplace. The ballet could have used music that was more distinctive. To me, the music was mostly dull, where it should have been soaring, with a sweet but tragic quality.

Sweet but tragic, with scary stalker thrown in, sort of sums up the character of The Little Mermaid, and I cannot picture anyone performing the role better than Azzoni. The leads on opening night were mature dancers, and their experience showed. Their acting was remarkable. No bizarre empty gestures here. When Jung smiled at Azzoni, you immediately understood that he viewed her like a funny little sister, not a lover. And when Azzoni plotted and schemed to win Jung as her personal prince, you felt her desperate longing as well as her innocence. Azzoni’s head, neck, and chin stood out. With a tilt, an angle, a glance, it was apparent from her face as much as her body language that her mermaid never became a “real” woman, despite the gift of legs. The white, slightly spooky makeup on her face added to her perpetual otherworldiness. 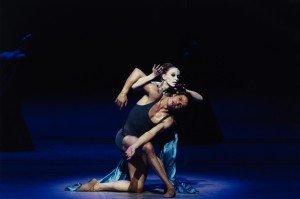 Silvia Azzoni and Carsten Jung in The Little Mermaid, photo by Holger Badekow

In general, I wasn’t blown away by the actual steps and phrases, but the mood and atmosphere were so incredibly crafted that I forgave The Little Mermaid for its shortcomings. Yes, it could use more tightening, and yes, some of the drama was over the top, but ultimately, Neumeier’s The Little Mermaid was exquisitely touching. The acting of the entire cast was tremendous and served to heighten the emotion of the story. I do not hesitate to recommend it.

Peer Gynt: a masterpiece in movement

San Francisco/Bay Area Round Up – February 2014