December 14th (matinee) – It always seems impossible that an entire year has passed and yet, here we are. December has arrived and in the classical ballet community, that means Nutcracker. A narrative that follows Clara’s journey (or Marie depending on the version) through a snowy forest to a land of sweets with her Nutcracker Prince, a holiday gift from her Uncle that comes to life. If you happen to be in Northern California during Nutcracker, an extra layer of lineage and significance comes with the festive two–act ballet. On Christmas Eve, seventy-five years ago, it was San Francisco Ballet who first debuted the full-length tale to audiences on this continent. Three quarters of a century later, SFB’s Nutcracker continues to delight and astound.

Choreographed by Artistic Director Helgi Tomasson, SFB’s current version similarly looks back, transporting the viewer to San Francisco in the early decades of the twentieth century as the well-to-do Stahlbaums celebrate the holidays with their family and friends. Historic details and lavish opulence imbue the elegant soirée, made even more magical by the arrival of Uncle Drosselmeyer, impeccably portrayed by Val Caniparoli. The adults responsibly imbibe while the children delight in illusions and full-size dancing dolls. Always a stunner, the ballerina doll variation has both novelty and technical bravado to spare. The soloists who have embodied the part over the years have certainly impressed with their theatricality and single-footed pointe work, but I think after Saturday’s matinee, it’s fair to say that this might be Julia Rowe’s role. She was absolutely transcendent, tackling the relevé sequences with gusto while remaining totally in character throughout.

Night falls, the guests depart, the house and its remaining inhabitants change state and the mystery goes on. After the battle scene with the mice and their King, the Nutcracker’s jubilance at his victory and transformation was undeniable. Luke Ingham soared through the air during this solo, the perfect combination of human and otherworldly being. And then we were onto my favorite Nutcracker scene: the snow. First and foremost, I often comment on the sheer amount of snow, truly believing that there is a little more added each year. I can’t say for sure whether that’s true, but at this performance, there were drifts galore and piling masses accumulating on stage. It was a bona fide blizzard! Unfortunately, the scene itself was a little underwhelming. As the Queen and King of the Snow, Elizabeth Powell and Lonnie Weeks started things off strong with the necessary regality and command. Save a couple of tricky moments, they kept things going well. But the snowflakes, the corps, seemed to be struggling as a group on Saturday. Timing, unison and placement weren’t always on their side, and so, what is typically a beautiful moment in the ballet looked rather chaotic. Though, at the same time, storms are too. Perhaps the approach to this scene is changing? 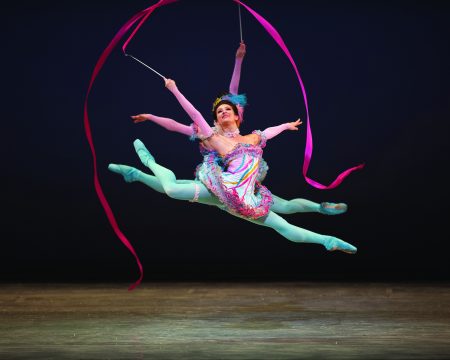 Onto Act II, with its collection of divertissements, which excited at every turn. As the Sugar Plum Fairy, Dores André led the charge with refinement and grace, joined later by the enchanting pairing of Sarah Van Patten (as the grown up Clara) and Ingham in the grand pas de deux. Two of the dances stood out for their incredible attention to precision and clarity: the Spanish pas de cinq’s (Megan Amanda Ehrlich, Miranda Silveira, Davide Occhipinti, Jacob Seltzer and Myles Thatcher) spacing and unison was enviable, as was the French trio’s (Kimberly Marie Olivier, Maggie Weirich and Ami Yuki), who have to contend with the added challenge of twirling lengthy satin ribbons while performing. Things went a little better for the corps during the Waltz of the Flowers, though again in sync port de bras sequences seemed somewhat elusive.

December 21st (matinee) – Bay Area audiences were treated to another delightful Nutcracker over the weekend as Oakland Ballet Company (OBC) brought its version, choreographed by Artistic Director Graham Lustig, to the historic Paramount Theatre. Like its neighbor across the bridge, San Francisco Ballet, this Nutcracker has deep history: OBC has been presenting the holiday tale for close to fifty years. It’s also a fairly traditional dance adaptation of Marie’s magical Christmas adventure. But what differentiates this Nutcracker and makes it so special is that it is filled with wonderfully subtle moments of connection. Choreographic gems and plot points that cleverly link one moment to another.

The first of these connections happens at the very beginning of the ballet, during the famous party scene at the Stahlbaum family home on Christmas Eve. Amidst the festive whirlwind, which features elegant, sweeping pointe work for the adults, is the character of Cousin Vera (Jackie McConnell) and her suitor, The Cadet (Thomas Panto). Not present in every party scene, the inclusion of this pairing offers two points of linkage. First, it provides a hint of foreshadowing as Vera and her beau will transform into the Sugar Plum Fairy and the Cavalier in Act II. Second, it creates a direct thread to Marie, embodied by the ebullient Paunika Jones. As Vera dances her solo and partnered steps, Marie mirrors the same sequences diligently in the background, excitedly imagining her future self dancing the same variations. Fast-forward to a little later in the Act, where Lustig injected a compelling pas de deux for the Nutcracker (Skylar Burson) and Uncle Drosselmeyer (Vincent Chavez), establishing another integral connection between two important roles in the ballet, one that is rarely mined at all. That spirit of continuity continued as we moved to the snow scene. In this Nutcracker, Marie and her Prince are not bystanders in the wintry forest; instead they participate fully along with a cast of Snowmaidens and Snowballs. It makes far more sense story-wise as well as adding much choreographic beauty and variation to the tableau. Having said that, the Snowmaidens’ pointe shoes were too loud on Saturday afternoon, which unfortunately, did distract and detract from their performance. In addition, unison seemed to be a challenge. Super high extensions are impressive, no question, but achieving them can also compromise togetherness and cohesiveness of the entire group. In situations like Nutcracker’s snow (and its waltz of the flowers), that also has to be a consideration. 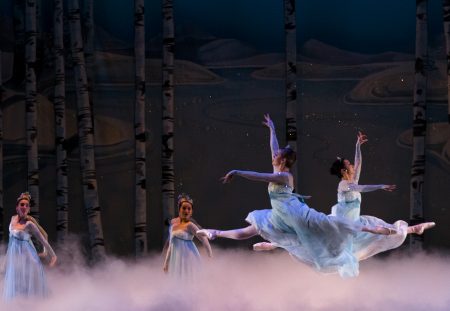 Charm was the order of the day as Act II’s series of dances unfolded. While there was some occasional choreographic busyness, the stage was awash with sparkle and enthusiasm. In Lustig’s Nutcracker, the Chinese divertissement is a nightingale, a refreshing approach to a difficult and controversial moment in the ballet. And as that nightingale, Sharon Kung was an absolute wonder – her consecutive pirouettes from fifth were quite something. Instead of the lengthy French variation, Lustig substitutes a courtly Baroque-inspired German quartet, which, as interpreted by Karina Eimon, Adele Hall, Brandon Perez and Yanis Eric Pikieris, had gorgeous intricacy and striking epaulement to spare. Again, Marie and the Nutcracker collaborated with the corps in this Act as well, resulting in a lovely Waltz of the Flowers. And McConnell and Panto were terrific in the grand pas de deux. Not only did they command the space technically, they kept things moving along at a great pace. The Nutcracker’s last major duet can tend to lag, but not in their more than capable hands.

December 23rd (matinee) – This season has been all about revisiting some of the longtime holiday dance traditions that the Northern California region has to offer. And there are plenty – the lineage here for festive choreographic programming is significant. My final stop was at Yerba Buena Center for the Arts to take in Smuin Contemporary Ballet’s twenty-fifth edition of The Christmas Ballet, a revue style program that pairs numerous dance forms and genres with jolly musical selections. Divided into two halves of short dance musings, Classical Christmas and Cool Christmas, much enchantment and joy awaits with every new number, many of which were choreographed by the company’s founder Michael Smuin. A great holiday dance sampler, indeed! 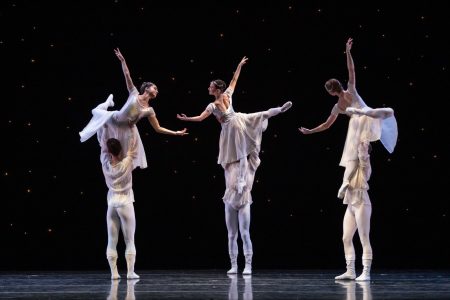 Because I’ve seen this production several times (though each year is slightly different), what follows are simply some highlights – performances and choreography that stood out as particularly noteworthy in 2019’s iteration. With its delicate balances and luxurious turns, Smuin’s Zither Carol was again part of the line-up and Maggie Carey was sublime in the treasured pointe solo – her attitude poses floated timelessly in space. Sleigh Ride, a quartet choreographed by Amy Seiwert, had some of the best unison of the day, and managed to walk that fine line of being technically demanding without looking too busy or fussy. A new addition to the mix this year, Amy London’s Still, Still, Still impressed with its lyrical elegance, grand lifts and clever incorporation of gesture. This dance for six is surely already in the running for next season’s The Christmas Ballet. Other returning favorites included Smuin’s hypnotically meditative Veni, Veni Emmanuel, interpreted by the women in the company. The walking patterns, the stage architecture, the port de bras – everything is so pure and unencumbered, and the result, powerful. Whimsical Celtic footwork and social dance patterns imbued the charming The Gloucestershire Wassail. And closing the Classical Christmas scene was Nicole Haskins’ jubilant ensemble piece Joy To The World. Grand majesty soared from the stage in every moment of this finale, especially during Ian Buchanan’s incredible multi-pirouette sequence.

The Christmas Ballet’s second half, Cool Christmas, is chock full of fun, novelty and humor. And while I think that some of the vignettes might be a bit dated and perhaps ready for a permanent hiatus, the audience’s uproarious laughter is certainly indicative of their immense enjoyment throughout. Mengjun Chen was impeccable in one of the more technical dances in the act, Smuin’s Drummer Boy – his enviable ballon informing every beat, jump and leap. Jingle Bells was a popular musical option. Haskins’ J-I-N-G-L-E Bells featured a cute reference to Swan Lake’s famous cygnet variation and Val Caniparoli’s Jingle Bells Mambo (another stellar example of unison by Buchanan, Ben Needham-Wood and Max van der Sterre) brought the rarely seen Italian changement to the stage. But by far what I look most forward to in this act is the percussive dance. Some years it appears more prominently than in others, and this year it had a strong presence. There was the waltz clog in Droopy Little Christmas Tree, Tessa Barbour’s rhythm tap solo (with terrific toe stands) in Bells of Dublin and a new, endearing tap duet, created by Barbour to It’s Beginning To Look A Lot Like Christmas. Danced by Carey and Cassidy Isaacson, its old-school tap vocabulary of back walks, time steps, essences and riffs was both winsome and nostalgic.