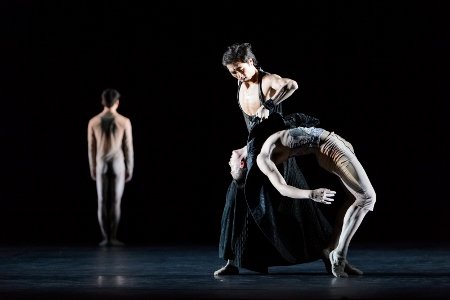 Pas de Trois from A Room of Her Own, Castrati, In Light and Shadow

There may be more shocking subjects for a dance, but one about ceremonial castration is right up there.

Castrati, choreographed by Nacho Duato, was the central dance in a program that the Hong Kong Ballet presented last week at the Joyce Theater, which also included the pas de trois from Fei Bo’s A Room of Her Own, and Krzysztof Pastor’s In Light and Shadow. It’s not the best dance on the program, but it’s the one that will get the most attention because of its subject matter. All three were curious choices for the company to bring to New York because of the limited opportunity they presented to display the capabilities of the company’s dancers.

The piece is nothing if not dramatic. From the beginning, the tension level in Castrati is off the charts. It presents in what might be a darkened chamber in a medieval monastery. The men are dressed as monks, or perhaps as members of some demonic church choir. Even without Duato’s choreography, the figures are ominous and terrifying. Whether they’ve already been castrated or not is not clear, but what is abundantly clear is that they’re about to use their power and authority to castrate another in the name of spiritual and musical purity. The music by Karl Jenkins (unidentified, but it’s the first movement – Allegretto – from Palladio, which was more famously used as the musical accompaniment to television commercials for DeBeers, the diamond company) slices through the air as Duato’s testosterone-driven choreography for the nine-man cast slices across the stage.

The tyrannical strings of the Jenkins piece yield to the mournful soprano sounds of a castrati (unidentified music by Vivaldi, who utilized castrati in some arias from his operas). A young man – presumably representing a prepubescent boy who looks considerably younger than the other men in the piece – agonizes over his imminent castration. Men soon appear on stage dressed in tight-fitting costumes with their chests bared to reveal their breasts.  The costumes make them look effeminate, which I suppose is the point. These men, sad representations of some castrati lifestyle, try to calm the boy’s fears, but it doesn’t work. In the next scene, which is yet more virulent than the first, the chosen one (there are similarities to The Rite of Spring) is surrounded by the monks/choir members. When the deed is done, concealed from view but no less ferocious and harrowing, the ‘victim’ emerges with his hands bloody, and the men in the audience leave their seats at intermission with their legs crossed in self-protection.

If this all sounds somewhat ludicrous, it’s not. Castrati is very well-choreographed for what it purports to be, but isn’t particularly memorable beyond that, and I could have done without the overly repetitive reaches to the groin, which I suppose goes with the territory. The dancers handled Duato’s choreography well, and Jie Shen danced the chosen boy with an extraordinarily rich emotional range.

The superior dance, however, was Pastor’s In Light and Shadow. An abstract ballet to excerpts from various J.S. Bach pieces, the ballet is an interesting exploration of progressive movement. According to HK Ballet’s Artistic Director Madeleine Onne’s comments at a post-performance discussion, Pastor’s original production (it was choreographed in 2000) featured considerably more light and shadow than was capable of presentation at the Joyce. Nevertheless, as it was, I found the use of lighting and shadow (designed by Bert Dalhuysen) intriguing. But the play of the light off variety of colors, shapes, and textures of the costumes (designed by Tatyana van Walsum) was of considerably greater significance.

The ballet began with a duet, danced by Jin Yao and Wei Wei, that describes somewhat austere passion – matching the sense of the lighting and the one dimensionality of the grey costumes for both. It then opens, in terms of stagecraft, lighting, and space, to a series of sequential dances. Although these dances are generally paired, the women were the focal points, led by a somewhat solemn woman in a blue-green skirt (Liu Miao-miao), a vivacious, sensuous one in a red dress (Jessica Burrows), and a vibrant one in a yellow print skirt (Dong Ruixue) who brought a particularly lively, youthful air to her dancing. All three lit up the stage whenever they appeared, regardless of the lighting used to illuminate them. The concluding section of the piece, in which groups of dancers occupy separate areas of the stage and take turns as the segment’s focus, is particularly well choreographed and interesting to watch. 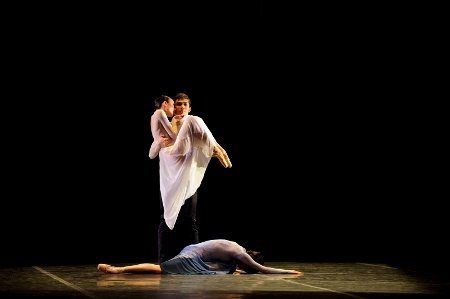 The evening began with an excerpt – the pas de trois from A Room of Her Own. I find excerpts from larger ballets annoying – unless they’re intended to be functional as stand-alone dances, the context is lost. So it was with this pas de trois. A woman in a lovely blue gown, Liu Yu-yao, sits in a Spartan-looking room at an equally Spartan-looking desk, writing. A man Li Jia-bo) and younger-looking woman (Liu Miao-miao), both in white, suddenly materialize and dance together passionately. Jealous and agitated, the woman in blue leaves her desk and repeatedly attempts to intervene in the couple’s duet, and to replace the apparently younger woman with herself, but her efforts are to no avail. She returns to her desk confused, despondent, and alone – and in frustration or madness rips apart the paper on which she was writing as if it was representative of her heart.

Fei Bo, who was recently represented in New York by the full length ballet The Peony Pavilion, presented by National Ballet of China last summer at Lincoln Center, creates movement that is elegant, and full of swirling arabesques and unfulfilled passion – but it’s more form than substance. And although I admired what I could tell of the dancer’s abilities, I had no idea who these people were – and knowing that was an important component of understanding what I was seeing. This pas de trois, by itself, could be accepted as showing one jealous woman’s response to an affair taking place under her roof, perhaps a husband’s or lover’s dalliance with a younger woman, but the fact that the couple are the inventions of a female writer who couldn’t divorce herself from the romantic fantasy she created, which was the explanation provided in the post-performance discussion (there was no reference in the program to the larger piece being based on an essay by Virginia Woolf), wasn’t at all clear. That the three dancers in the pas de trois danced beautifully and the two women looked gorgeous in the costumes (by Kun Li) only whetted the appetite to see them dance in a piece with more choreographic substance.

This is an engaging group of dancers, who might well be a very fine group of classical and contemporary ballet dancers judging from the company’s repertoire and its determination to be a player in international ballet. When they return to New York – and I hope it will be soon – they should consider bringing a classical or neoclassical ballet with them.

Wolf Trap Opera and Halcyon’s By the People, The Seven Deadly Sins