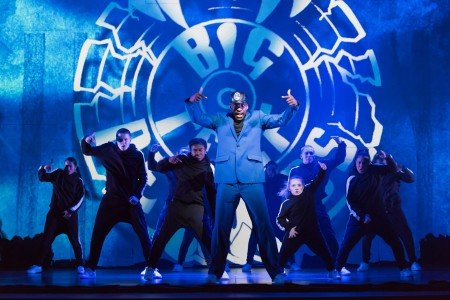 Into the Hoods Remixed is a delight. Inspired by the Stephen Sondheim musical, Into the Woods, the story ties together Little Red Riding Hood, Jack and the Beanstalk, Rapunzel and Cinderella in a contemporary setting, with 100 pop songs, terrific dancing and bright, imaginative sets. It’s fitting to see the show at The Peacock, where it first appeared in 2006 after much development support from the theatre’s parent organisation, Sadler’s Wells. It later moved to the West End for a two-year run, playing a significant role in moving hip hop dance into the mainstream.

The production has been updated with new songs, designs and choreography, with the new cast allowed to put their own stamp on the show. Kate Prince, founder and director, was keen to tap into the new generation of ZooNation performers, many under 21, who have come through the company’s classes and the ZooNation Youth Company, alongside some oldsters in their late 20’s! The gamble has paid off big time. 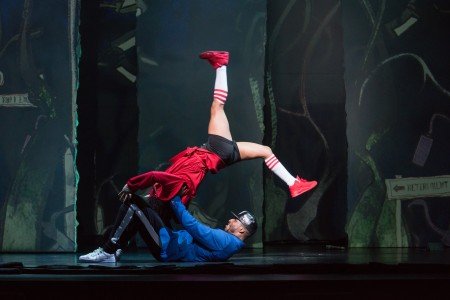 Two kids leave their school and homes behind in search of freedom, but end up in the anarchic world of the Ruff Endz Estate, where they are taken in by The Landlord who will only pay their fares back home if they gather four presents for his daughter’s birthday. Then the plot gets really complicated with the multiple fairy stories overlaid with additions aplenty, so I’d better stop, otherwise we’ll have 2,000 words on the narrative alone.

So, let’s just say that the kids meet a variety of characters with the choreography, credited to nine named individuals plus the original cast, defining their individual spirits: Lil Red, played vivaciously by Natasha Gooden is a happy soul wanting to be a diva and brings grace to her quick, well defined hip hop movement; Spinderella a shy, wannabe DJ is brought to life by Lucinda Wessels who dances in a more fluid style with upper body curves; Duwane Taylor as Wolf, the local hard man and record producer, is suitably scary with powerful, jagged moves; the diminutive Annie Edwards plays Fairy G as a spirit with attitude and has a delicious duet with the 6′ Wolf, around twice her height. Best of all is Jaxx played by Corey Culverwell, with sensational tricks framed in an easy, smooth dance style. The leads take their turns in the corps of around 17, who show great musicality in the ensemble sections. It’s interesting that we frequently see symmetrical formations reminiscent of 19th C. ballet. 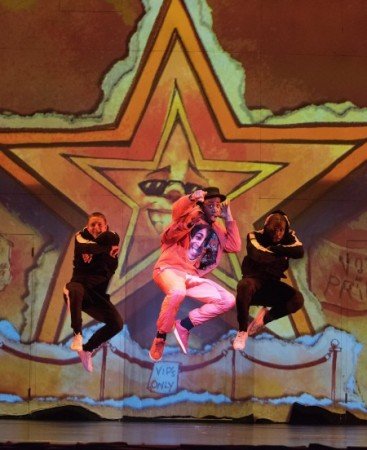 The set designs by Ben Stones, video by Andrzej Goulding and lighting by Andrew Murrell combine to make a dazzling vista of crooked tower blocks, harsh urban landscapes, all set in bright lights and vivid projected images. D J Walde compiled the song samples that take up a whole page of credits in the large format programme – it’s “These you Have Loved” for modern times.

Amidst all the humour and exuberance there are dark notes as Jaxx is made homeless and hungry, Lil Red is exploited by Wolf and the Landlord breaks his promise to the lost kids, but as befits a fairy story all’s well at the end with the kids back home, thanks to Wolf, and Jaxx and Lil Red married.

I was mightily impressed by ZooNation’s Some Like it Hip Hop, and can now add Into the Hoods Remixed to my list of favourite musicals. I’m looking forward to Kate Prince’s next projects, as if they come close to matching these two shows, a treat is guaranteed.

ZooNation: The Kate Prince Company – Message in a Bottle

Playlist – an evening of dance diversity