Before I entered the City Center Theater on the opening night of Houston Ballet’s four-performance engagement, I wondered why a major ballet company, with a rare opportunity to perform on a New York stage, would bring with it a repertory program consisting of three contemporary dances rather than a memorable evening-length ballet. And after the undistinguished opening piece on the program, I wondered still more.

And then came the second piece on the program.

When I read the cast listing in the program note, I feared the worst. I’m not a fan of a preening all-male testosterone-infused dance, which is what I anticipated Come In would be based on its all-male fourteen dancer cast, and that it was choreographed by Aszure Barton, whose works I’ve been lukewarm to in the past, didn’t tip the scale the other way. So I was completely unprepared for the stunning performance by this ensemble, and for the equally impressive dance they performed. 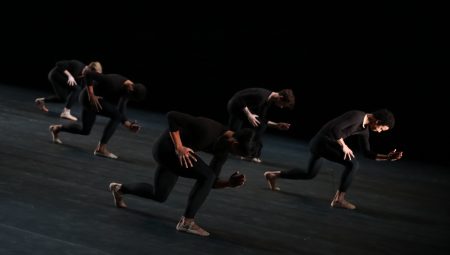 Had I read further in the program note, or done some advance research on the piece (as I’ve often said, I approach a performance as a typical audience-member might; I don’t do research ahead of time), I might have known better. Created in 2006 as a vehicle for Mikhail Baryshnikov and Hell’s Kitchen Dance, Come In (which I initially thought must have been a play on “coming out”) to me is a memorial in dance to those who lived and died during the AIDS epidemic. There have been many such dances, but none I can recall that delivers such a universal message with both sincerity and sensitivity, as well as quality choreography and execution.

That Come In, which premiered in Buffalo in 2006 and was first performed by Houston Ballet last March, is a different animal from pure power dances is evident from the outset, with the quietly introspective – in hindsight, somewhat elegiac – score (Come In!) for violin and ensemble created by contemporary Russian-Ukranian composer Vladimir Martynov. The piece, which premiered in 1988, bears a superficial resemblance to certain work by Arvo Part, but it’s not at all saccharin; just beautifully fluid, punctuated at times by “knocking” sounds generated by a wood-block, which, when I heard them, seemed metronome-like as if to signify that “time in this life is ticking away,” but which I later learned was intended to reference “knocking on heaven’s door” – from which the musical composition’s title is derived. The chant was here performed live by the Orchestra of St. Luke’s, conducted by David Briskin, featuring violinist Jesse Mills. 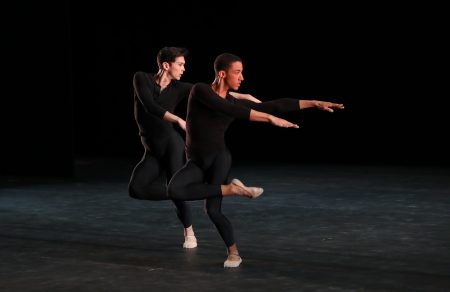 Martinov is said to have written of this piece (not confirmed): “The staircase to Heaven is inside your heart; you enter through the door of your soul. Our whole life is but an attempt to find this miraculous entrance. All our deeds are but a timid knocking on this mysterious door. All our hopes are to hear a voice that would respond, ‘Come In!'” – a statement almost as beautifully written as the composition itself. On its own, it’s an extraordinary work, proving once again how much I don’t know that I don’t know.

I didn’t know where Come In was going until a significant part of the dance had been completed. Prior to that point, it was a sympathetically performed group / relationship dance (though the nature of the relationships, as a group or between members of it, aren’t clear), with a focus on the roles danced by Connor Walsh and Charles-Louis Yoshiyama. At a certain point, dancers who had been perched individually on chairs (that they’d positioned onstage long after the dance began), started disappearing, leaving empty chairs. And the sock to the gut hit immediately. There’s more power in this dance than in any “power” dance I’ve seen. 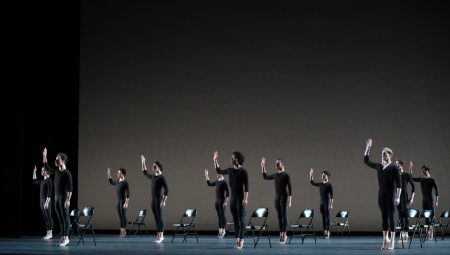 Until those chairs are brought out, the dance itself might be seen as undistinguished. But with the understanding that it relates to entering heaven based on what’s in one’s heart, in the context of people dying for that same reason, it all, in hindsight, makes sense. The off-balance leanings, the “personal” references to washing, touching, the swirling movement, the occasional twitch and emphasized angle, the seeming search for identity, the soaring, ultimately dying, lifts; and the soaring, ultimately dying, emotional connections – it all fits. And Walsh, a company principal, was particularly magnificent here. 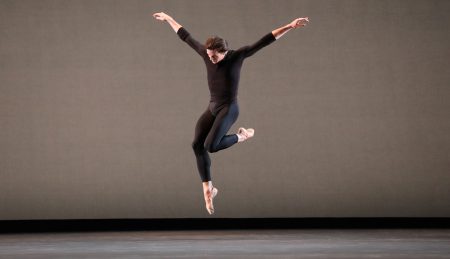 I must acknowledge that the dance’s applicability to the AIDS epidemic is my own construction – it could be that the dance was intended as some reflection on age, mentoring, and passing the torch (or quenching it) as advancing years take their inevitable toll. That’s a viable way to interpret it, especially considering its having been created for Baryshnikov late in his dance career. But that interpretation would limit its significance. Maybe it’s supposed to represent a group of acolytes, or a class of students that the aging dancer is mentoring – but why have a large all-male cast, clad in black (designed by the choreographer), with a black backdrop and dark, somber lighting, and why have more than one focal point even if the Baryshnikov / Walsh character is dominant? Most important, why portray relationships that, while not overtly sexual, are so emotionally dramatic with respect to the awareness not just of imminent loss, but of loss having already happened?

Again, I can’t say that my interpretation, or anyone’s is “right.” For a work of art, there isn’t necessarily a “right.” But it fits. And I think that the audience got it too – from my viewing position the enthusiastic reception the dance received was in contrast to the reception given the dance that preceded it.

But not for the final piece on the program.

Justin Peck created Reflections for Houston Ballet, which premiered on the same program as the company’s initial performance of Come In. While there’s no denying that this piece includes ingredients similar to pieces he’s created for New York City Ballet, that’s not necessarily a bad or unusual thing. Regardless, Reflections is a glorious piece whether or not one places it in the context of Peck’s choreographic oeuvre. 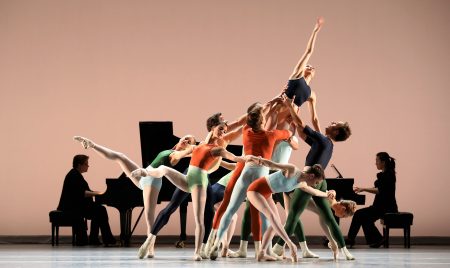 The dance has a striking opening, garnering immediate audience applause, with the ensemble of 6 men and 5 women posed in various positions upstage center, in front of, and being bracketed visually by, two pianos that face each other. The dancers are posed within a circumscribed positioning (close together, in a circular grouping, which I’ve sometimes described as a “huddle” or “scrum”), but here with each dancer appearing in a somewhat different position from another. The closest description I can think of is that of an artful presentation of a dinner plate at an upscale restaurant, with what are normally considered side dishes placed atop the protein of choice – with string beans or asparagus spears placed at contrasting angles atop everything else.

Well, that’s the way I saw it.

And then the fun begins. 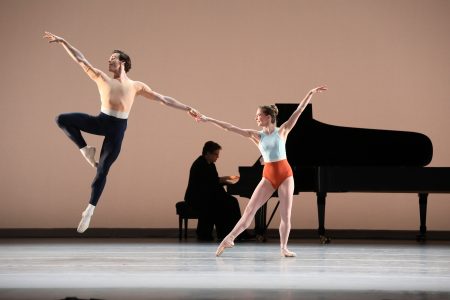 To frequent collaborator Sufjan Stevens’s interesting and exhilarating score, Peck manipulates his dancers with extraordinary skill, as he has from the outset, particularly with respect to moving the group as a whole. Patterns suddenly materialize out of nowhere, repeated images are there for purpose, not just because you’re supposed to do that, and an overall sense of visual surprise that makes watching those Peck ballets that are “similar” so rewarding, even if some of this stuff has been seen before. The concluding return to close to the original positioning (represented in the attached photo) is icing on the cake. And I appreciate that Peck, while of course basing his chorography on the music, didn’t make his movement qualities dependent on it. It’s far more interesting a dance than those that follow the musical beats slavishly.

Each of the dancers (Jessica Collado, Tyler Donatelli, Karina Gonzalez, Bridget Kuhns, Melody Mennite, Allison Miller, Oliver Halkowich, Hayden Stark, Harper Watters, and Walsh and Yoshiyama) excelled, but for me the dance’s highlights were the two duets – Mennite and Walsh, and Gonzalez and Yoshiyama. And the “dueling” pianists, Katherine Burkwall-Ciscon and Yi-Chiu Rachel Chao, added another level of skill and flair to the performance.

Mark Morris’s The Letter V, created for Houston Ballet in 2015, while not a bad opening piece, to me had little to recommend it beyond showing off its cast of sixteen reasonably well, and it was particularly pleasing to see Yuriko Kajiya, former American Ballet Theatre soloist and now Houston Ballet principal, back on a New York City stage. 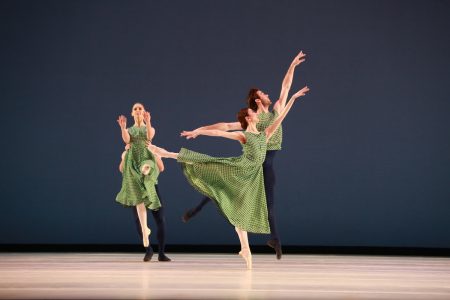 Overall, The Letter V is bright and sunny and cheerful, but, choreographed to Haydn’s Symphony No. 88 in G Major, it lacks the score’s sense of classical order – I think a deliberate attempt to insert visual variety that doesn’t fit with Morris’s strict adherence to the musical frame. To its credit, the stage never looks busy even with the large cast, but that’s because it’s frequently broken into smaller-populated segments. The dance is a hodgepodge of styles, with the only unity being the classical music to which it’s choreographed, providing a sense that when the choreographer tired of a particular movement style, he moved on to another. I saw folk, square dancing, ballet, and contemporary all mixed in – which isn’t necessarily bad, just not satisfying as presented here. I’ve seen Morris pieces that are far more meaningful and visually fulfilling. 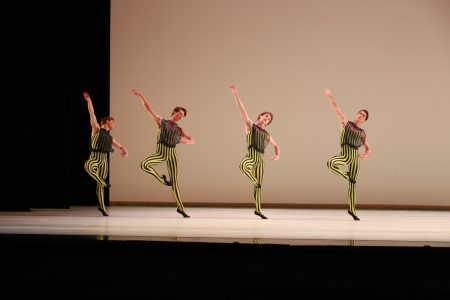 Perhaps The Letter V would have been easier to understand if the dance’s title had a particular meaning (no such insight was provided in the program). Even after a cursory perusal of words that begin with “v,” nothing seemed remotely applicable – and the title has nothing whatsoever to do with the Thomas Pynchon novel “V.” Maybe it’s derived from the science fiction television program “V,” which concerned “visitors” from another world. That would fit with the somewhat otherworldly costumes (designed by Maile Okamura) which were dominated by lime-green dresses for the women and vertically-striped bottoms for the men, which provided a fanciful visual presentation that enlivened Morris’s choreography. [Further research indicates that The Letter V is an alternate name for Symphony No. 88, derived from a method for ordering Haydn’s symphonies. Maybe it was better not to know.] 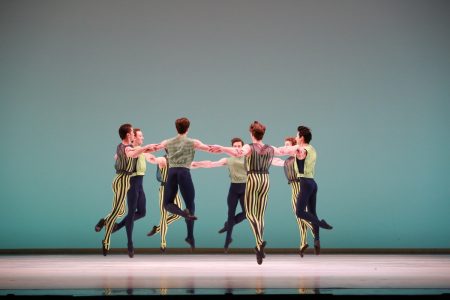 I must admit, however, that the piece does provide a fine introduction to the Houston Ballet dancers – except for that purpose it might have been beneficial to identify the dancers within each of the composition’s four movements. And maybe, to get back to my original question, it helps illustrate why the company brought a repertory program to City Center instead of a more defining evening-length ballet. Aside from avoiding the additional cost of transporting sets and costumes, such large-scale ballets have a limited number of featured roles, perhaps providing a better idea of individual dancers’ talents, but less of a sense of the company as a whole in its 50th year. This program, at least, accomplished the latter. Based solely on the three dances presented, the company, under Artistic Director Stanton Welch’s leadership since 2003, is filled with an eclectic and capable group of dancers, with the distinction of having the male dancers seem more advanced than the women (usually it’s the other way around). But further appearances here, which would be welcome, would provide more of an indication than did this brief introduction.