I’ll cut to the chase. If you have an opportunity to see Wallflower, or probably anything else by the Inbal Pinto & Avshalom Pollak Dance Company, go. This award-winning contemporary dance company out of Israel has a lot going for it, if Wallflower is a typical example. Wallflower won the Israel Critics Circle award as the “Best Dance Show of 2014,” and I understand why. As a critic myself, I have practically nothing critical, in the negative sense, to say about this work. From the costumes, lighting, set and music to the choreography and the dancers, I wouldn’t change a thing. And that’s rare.

Everything deserves note. The original music, by three Japanese musicians — Umitaro Abe, Mayu Gonto and Hirofumi Nakamura — is quirky and beautifully composed. The soundscape is intriguing throughout — clinks of an old music box, clanks of an old clock, muffled breathing like Darth Vadar, Buddhist bells, drips, dings, rings, maybe even the whooshing zoom of traffic and finally, classical strings and vocals like angels.

The striking colorful costumes, a collaborative project between Moriel Dezaldeti, Rinat Aharonson and Pinto and Pollak (sewing by Ela Givol and Rosalind Noctor), are incredibly successful in their own right as art. The unitards with distinctive woven designs, like striations of earth or parts of a Navajo rug, make the dancers stand out against the two stark white high walls that form an angle of half of a box and the white marley floor. 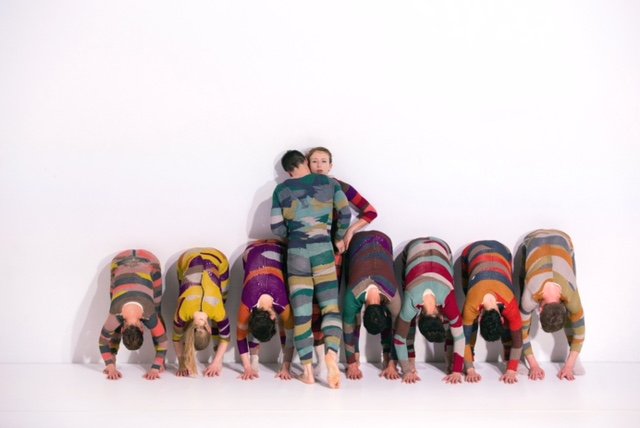 One older dancer, Zvi Fishzon, wore a different costume that for most of the performance covered his face. Was he a slug, a turtle, an insect or just a blob? In woolen grayish brown garb, with some pinkish swirls, he crawled, swallowed some of the dancers by enveloping them within his blanket-like folds, and eventually stood with stubby upper limbs pushing out on an angle, like a tree. The rest of the dancers conjure animals sometimes, too. Huddled in a line, hunched over, bent forward and curled atop each other, they look like segments of a caterpillar. Lifted onto the wall or flinging themselves into it, they look like frogs, climbing with splayed hands.

In this abstract dance, the dancers show off impressive acrobatic skills. A lot of the movement resembles contact improvisation — bodies rolling, lifting and swinging. The choreography is not without humor. The brownish gray creature wobbles about. The dancers, in down dog, walk on all fours, their rears in the air. They hold hands in a line against the back wall and lean over, tilting, then collapsing like dominoes, ultimately resembling a pile of sleeping children. Subsequently, a pile of dancers looks more like an upturned laundry basket, or a half dozen snuggling kittens. In a duet, a woman stands on a man’s back as he is face down on the floor. She rides him like a surfboard. The dancers also play games, freezing, for example, in various poses.

As the dancers move, the landscape on stage constantly changes. Sometimes the dancers seem like building blocks being put together by unknown forces in interesting ways. Constantly, gravity challenges them, whether trying to soar up the wall in a basketball-like leap, or sinking against it, with their backs sliding downward. At one point, the dancers voices burst forth as they breathe loudly as a group. I kept looking forward to what came next, because it was never clear what that would be, how the music or movement would change. Despite the variety of ideas at work, Wallflower seems seamless. I was completely engaged.

Toward the end of Wallflower, silver metal hangers on long thin poles descend from the ceiling above the stage. The dancers peel off their knit costumes to reveal white tanks and underpants. They hang up their costumes, and then the costumes ascended, twisting and casting headless human shadows against the tall white walls. In this final section, the movement quality changes somewhat, and the dancers appear more balletic, gentler, more akin to their former skins floating in the air above them.

For me, what is best about Wallflower isn’t the dancing, although the choreography is creative, but the spectacular execution of all of its elements. Like every choreographer I’ve heard, Pollak, in a conversation with the audience afterward, denied that Wallflower has a particular meaning. He welcomed whatever interpretation people choose to give it. Indeed, Wallflower invites multiple interpretations, which is part of what makes it so entertaining.