Turf, a new evening length dance choreographed by Inclined Dance Project’s artistic director and choreographer, Kristen Klein, premiered last weekend at the Center for Performance Research, a space located in the Greenpoint section of Brooklyn. I’ve reviewed IDP’s performances previously, and was impressed each time by Klein’s choreographic quality, as well as by the company’s dancers. This year’s new piece, which I saw the evening following its opening, has moments of unusual insights, interesting imagery, and extended periods of performance excellence by the company’s new members as well as its veterans, but overall it lacks the coherence and clarity that I found in Klein’s previous dances.

In the extensive program notes, Klein states that Turf is not “about” some turf in macro environmental terms, as in, say, being green. Rather, Turf deals with the environment on an individual level – the space one habitually occupies or sees in daily life, whether that be, for example, a street or a subway line. More specifically, Klein explains that the dance explores themes of change – the changes we see (or don’t see) in our turf, including the people we come in contact with, whether that is due to seeing something for the first time, the turf itself (and people in it) changing over time, or a decision to change the paths we take; and also that change, breaking free from our comfort zones, is essential. In summary, I saw little of the former, but considerable emphasis on the latter.

Turf shows the same level of choreographic consistency as Klein’s previous pieces. There’s a core movement quality that is essentially angular, with a quirky, twitchy quality, and considerable floor work. By itself, that’s not unique. But this core movement is different in that it’s measured and not likely to lead to whiplash, and is tempered by periods of eclectic or lyrical movement: a dancer will drag herself (the company consists of seven women, including Klein, who did not perform in this piece) across the floor in various ways, or run, or be lifted and carried by another, or hit perfect arabesques, or sit quietly on chairs or in perimeter stage space.  Like her previous pieces, Turf also has a clear overall structure that doesn’t stay focused on the same images for too long, and consequently maintains visual interest. And her dancers are not automatons; emotions percolate silently, but they’re there. Somehow it all hangs together. 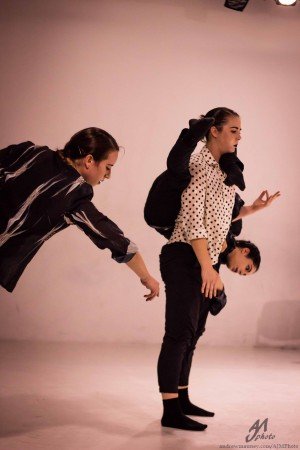 To my eye, Turf resembles one of Klein’s earlier dances, Stuck Together Pieces, which I reviewed three years ago. That piece dealt with interactions among people in different spaces in which the people (the dancers) were suddenly “stuck together” in different types of restricted spaces. I remarked at the time that in the way it integrated group dances with solos or pairs, Stuck Together Pieces delivered a concurrent sense of individuality and community.

Turf’s subject and level of accomplishment is similar, but although there’s plenty of group work, the focus appears, appropriately, to be more on individual solos, with group action a necessary consequence of being in part of, or an observer of, a larger environment. It could also be that I saw the piece this way because the solos are more detailed and varied, and provide opportunities for each of the dancers to express that inner emotional percolation – anxiety, fear, confusion, intensity.

But it could also be that the solos dominated in my mind because the overall piece isn’t as clearly defined as Stuck Together Pieces. Based on the program notes, I expected to see different environments that each person seemingly travels through or is exposed to, differences within the environments that one “sees” for the first time and changes in the turf over time. But with few exceptions, the environments displayed are too choreographically indistinguishable, so there’s no sense of a reaction to something different or what that “something” might be. That part of what Turf is about seems to have gotten lost. 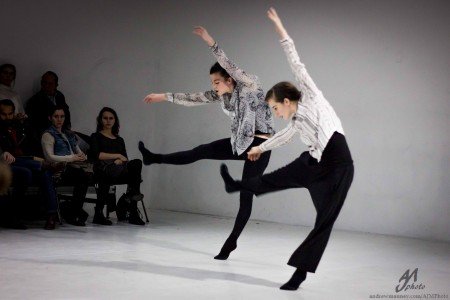 This sense is exacerbated by Klein’s choice of musical accompaniment. Klein curated the dance’s score from unidentified music by Loscil – a group known for producing electronic ambient music (the name is derived from a “looping oscillator” function). So Klein’s selection of it to provide environmental background sound is understandable. But in close quarters like the CPR theater, this background noise becomes much more dominant than it would be in daily life, and the constant, almost numbing repetition of sound can make the choreography seem more repetitious than it is, and the dance seem longer than it is.

As she’s done with many of her other dances, Klein has inserted idiosyncratic movement specific to the subject matter of the dance. Here it’s an image of one dancer seemingly guiding another by pushing or pulling from behind, with the guide’s arm covering the eyes of the dancer she’s directing. It’s a strong, frequently used image, but its meaning is confusing. I initially thought that the image is meant to convey not so much one dancer/person guiding another, but as a metaphoric visualization that the person “guided” doesn’t really “see” the turf around her. But this doesn’t jibe with other images that clearly indicate “guidance” or “direction.” For example, there are also images of dancers moving others from one chair to another – as if changing seats on a subway. And the repeated imagery of one dancer guiding another, however it’s manifested, seemed incompatible with the dancers’ roles as people in a given environment. 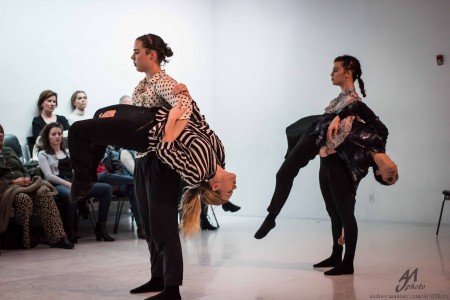 And then I got it – at least I think I did. At the point in which they direct others, these guide/dancers are no longer other “people,” but the embodiment of forces (either internal or external) that cause someone (the guided dancer/person) to see or not see, to sit in one place or another, or to change her turf and escape from her comfort zone. This theory also works for the segment of the dance in which members of the audience are selected and “guided” through different paths on the stage to different seating positions, and then at times directed to another seemingly inviting the selectee to see the stage turf differently.

But the effort that goes into deciphering what it is that these dancers are supposed to be doing, or who/what they’re supposed to represent at any given moment in the dance, is too arduous. And it gets more confusing when the dancers move in unison, holding hands as if exploring their environment’s perimeter, or, at the piece’s end, trying to bang their way out of it. 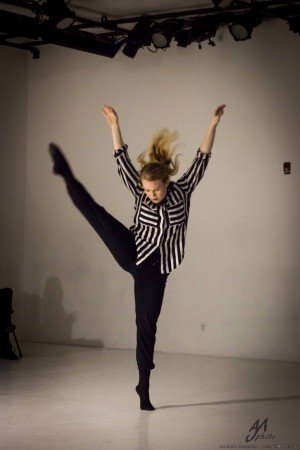 Perhaps that’s why I appreciated the solos as much as I did – but I suspect it’s also because they were so well done, and seamlessly integrated into the dance. Although it was difficult to determine exactly what about the environment, or about themselves (as people in the environment) each dancer was responding to, on their own each dancer did a super job, beginning with company veterans Christina Chelette, and continuing with Amy Campbell, Leighann Curd, and newcomers to the company, Shannon McGee, Elisabeth Wolf, and Maria Gardner, each of whom danced with a level of intensity, internal as well as external, that made the piece look vital. Campbell’s solo, for example, communicated fear, apprehension, and maybe a bit of paranoia at the thought of change, while Gardner’s exhibited deep concentration, as if studying the changed environment, or the thought of changing, before being willing to commit. And Gardner, the shortest member of the company in physical stature (and the one most often carted around the stage by others) deserves special recognition for lifting and carrying the tallest (Curd).

Finally, the piece in general might have benefited had it been shorter, which might have forced Klein to eliminate segments that seem to say the same thing as others. And dumping the garish blue lipstick worn by all but one of two of the women (Gardner and Chelette), or somehow explaining its purpose, might also be an improvement.

Notwithstanding my criticisms, Inclined Dance Project remains a vibrant example of the quality of choreography and execution that can regularly be found in small theaters on any given day throughout New York, and is further evidence that breaking free of one’s turf comfort zone, be it the black box down the block or Lincoln Center, is a good thing.