inQUAD is the name of a performance series that presents contemporary dances created by a group of emerging female choreographers. For its third annual program, organized by Kristen Klein, Artistic Director of Inclined Dance Project, which I saw at the first of two performances on Friday at Dixon Place (on the Lower East Side, near the Nolita border), Klein was joined by choreographers Lindsey L. Miller, Zultari Gomez, and Angie Conte.

I’m of two minds about program notes. They’re helpful, but usually only when a piece is so dense that figuring out what it means, if it’s intended to have any meaning, can be a chore. On the other hand, a clue now and then of the choreographer’s intent can be a helpful. Here, however, the notes, perhaps unintentionally, served a different function: they conveyed the expansive enthusiasm of the program’s young choreographers. The notes were innocuous fun to read because, to one degree or another, they displayed a somewhat inflated cosmic intent that’s endearing, even if superfluous or not attained (or attainable). 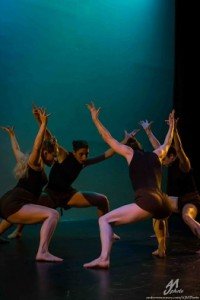 This relatively youthful intellectual exuberance provides a common thread for the five disparate dances that comprised the evening, each of which, in different ways and for different reasons, either displayed potential or accomplishment. To one extent or another I found them all enjoyable.

Miller’s company, LLMoves, presented two pieces, a duet that opened the program, and an ensemble piece that followed intermission. The dances were quite different (besides the number of dancers involved), but were united by a degree of choreographic simplicity that’s relatively refreshing, and that makes the presentation look polished.

The first piece, Impulse, is a duet danced by Miller and Victoria Dombroski that, according to the program note, showcases “the duality that exists within one individual and how we cope to find peace with the question ‘is it persistence or insanity to repeat the same actions over and over again and expect different results.'” If the dance was supposed to reflect that note, or vice versa, it failed: I saw the duality; I saw the repetitive movement combinations; but I didn’t see anything of cosmic significance beyond that. But without the protestations of intent, the dance succeeds as a competent, though not particularly unusual, dance reflecting individual duality.

Miller and Dombroski are not-quite opposite sides of the same coin: both are relatively tall, but Miller is blonde and Dombroski is brunette. They move in sync, sequentially, or occasionally as mirror images, or with distinct but complementary movement, until they return to dancing in sync and then continuing the sequences with varying permutations. I liked the clear, but not quite independent images of an airy Miller frequently seeming to lift herself skyward, while Dombroski is more often earth-bound and weighted; and of the two pushing/pulling each other like taffy that can’t quite separate. The movement quality, though occasionally interrupted by angular thrusts, is primarily lyrical and flowing, matching the varying tempo and the connected repetition and not-quite-repetition, like “twin” violin strings on the same instrument, of the unidentified accompanying music by Quixotic / Shane Borth. 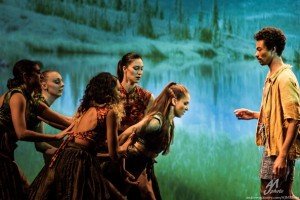 Miller’s second piece, The Trees Are Falling, displays the same relative choreographic palette simplicity and overall accessibility of Impulse, but on a grander scale and with delicately coordinated ensemble movement that collectively gives the appearance of movement in nature – at least when not being buffeted by a hurricane. The program note indicates that Miller intended to “explore the struggle the human race faces of how to live within the planet’s natural environment without destroying it,” and this intent is obvious in the dance.

In front of a non-intrusive projected film backdrop of nature scenes and animals who blend in with the environment without destroying it (photography and video by Court Whelan) and wearing gorgeous multicolor costumes that are environmentally representative (neatly designed by Zachary Alexander), five women are the chorus / witnesses to one man’s presence and intrusion. The lone male dancer, Zachary Tracz, outfitted like a contemporary Robinson Crusoe, wanders amid, enjoys, and ultimately almost destroys his environment. All survive, but the prognosis doesn’t seem too good. In addition to Miller and Dombroski, the women included Xenia Mansour, Michelle Siegel, and Maria Vittoria Villa.

Gomez’s Familiar Feeling was the evening’s most puzzling dance – seemingly reflecting a lack of clarity in the program note that accompanied it, which states that the piece is intended to illustrate “that moment when you realize that those feelings you’ve experienced have, in some way or another, allowed you to understand that you’re never the only one undergoing those moments, nor will you ever be. Many feelings eventually become familiar.” Got it? 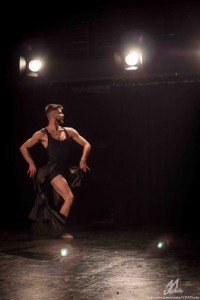 The dance opens with Miriam Gabriel and Lukasz Zieba upstage left, appearing to be a couple. They interact strangely, a sort of “getting to know you’ dance as they circle each other, clap hands, he lifts her, they shake hands, she balances on his back, they walk. Suddenly conflict happens – for no apparent reason. He pushes her away, slaps her (on the rear), then pulls her back to him, and the sequence repeats thereafter in slightly different ways. This continues until a second woman (Kerime Jessica Konur) joins them. She’s outfitted in black (like the other two) but also wears a flowing black skirt. Zieba’s character promptly removes Konur’s black skirt and puts it on himself, while Konur and Gabriel pair and display some sort of emotional connection, with Konur, now with her skirt off, interacting with Gabriel similarly to the way Zieba did. Eventually, Zieba exits, the music changes, he returns, but instead moving with “masculine” aggressiveness, he moves “effeminately,” with a swaying body that gyrates smoothly rather than angularly. And whereas he’d been stoic, almost mean-looking earlier, now Zieba, wearing a huge smile that arrived concurrently with his skirt, seems to be thoroughly enjoying himself (and his now “familiar feelings”?) immensely. Eventually, all three dancers adopt identical black skirts, and similar (or identical) movement quality.

The choreography for the second part of the piece (the first part is primarily exposition), is reasonably interesting, with solos, partnering changes, and the trio together, but the dance’s focus seems less on choreographic detail (and stereotypical movement qualities) than on attempting to communicate the liberation that familiarity with the unfamiliar may bring.

I saw a dance performed by Angie Moon Dance Theatre a few years ago, and, evidenced by the piece on this program, the choreographic growth by Artistic Director Angie Conte (aka Angie Moon) since then is apparent. 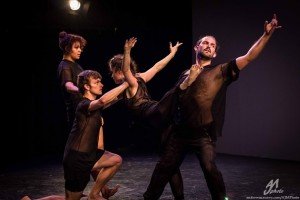 Vantablack is a substance, a coating, created in 2014 that absorbs virtually all light and is considered the blackest substance on earth. Conte’s Vantablack, which I suspect takes its name from the substance, is similar. According to the program note, it’s an unreal void; a “space where you taste time, smell gravity, see sound, feel what isn’t there, and hear the edges of an empty space. It’s what you see every day, but not at all what you see every day.”

I didn’t see anything near that concrete in the piece. But as a purely abstract dance, Vantablack works quite well. And I found the choreography to be intriguing, albeit somewhat…opaque.

Conte has coated her dance with a quality of surreal strangeness that’s the equivalent of a world seen differently; an alternative reality where dancers walk upside down or backward (while being carried), writhe on the floor as if walking sideways, get pulled and pushed and lifted and acrobatically transferred from one set of waiting arms to another; and communicate with their extremities (particularly their hands and arms) somewhat like humanoid insects, all in a dimly lit environment. And all are costumed (designed by the choreographer) in black – matte, of course, although the women’s costume includes black mesh.

Vantablack‘s strangeness (at times I thought of Chagall; at other times Magritte, but in shades of black) and constant movement make it interesting, even if the point of all this is simply to display that alternative reality. I particularly enjoyed watching Alex Tenreiro Theis, the dancer most often being carried, lifted, and tossed and the piece’s focal point (to the extent there is one), who moved with considerable flexibility and expansiveness, and added a quality of engaging mystery to the stoicism that otherwise was reflected in the dancers’ visages. Carly Krulee, Jared Mcaboy, and Lukas Dellios completed the ensemble.

Klein’s new piece, Phyla, completed the evening. The program note indicates that it’s an “exploration inspired by evolution, cellular division, gene mutations, and developmental similarities. This is a billion-year journey of single celled organisms fast forwarded to the complex species of today.” Talk about cosmic. And it’s all done in a dance that lasts about 20 minutes. Fast forward indeed. 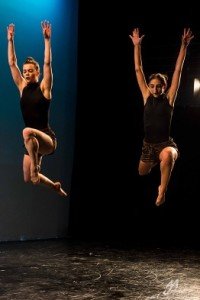 Notwithstanding the breathiness of that note, Phyla (the plural of phylum, as in kingdom, phylum, class…), is one of Klein’s better pieces. It works because the dance is a focused inspiration rather than a condensed history of evolution revealed in accelerated snippets of images a la the title introduction to TV’s The Big Bang Theory. It makes its way from point A to point Z smoothly, with images that somehow flow from a single organism (Amy Campbell), huddled on the floor center stage illuminated by a light cone and representative of other single cell organisms surrounding her in relative darkness, to a herd of non-specific animals.

It also works because Klein’s choreography, which in the past has at times looked frenetic, here looks more disciplined and, like her subject, focused. That’s not to say it lacks variety, or that the style is substantially different from the quirky movement quality I’ve seen before, but the movement flows more coherently, and is more purposefully linked to the subject evolutionary process. Whether intended or not, I saw a clear choreographic and visual progression from single cell, to ocean dwelling (and emerging), to avian, to animal, to a glimpse at a humanoid future. All in 20 minutes.

Doing a blow-by-blow description of the choreography is pointless. Suffice it to say that the progression isn’t regimented – the four dancers are individual entities that at any given moment may be part of an evolutionary group or individuals within one (or perhaps mutants), and who don’t all move in exactly the same way at the same time. I particularly enjoyed those moments of perimeter exploration, an action sequence that Klein has used quite well in previous dances, that here seems to indicate an effort to measure, and evolve beyond, temporary evolutionary confines. In addition to Campbell and Klein, the highly competent ensemble included Leighann Curd and Maria Gardner.

This program was a step up from previous inQUAD incarnations, and the presentation variety – despite the cosmic platitudes, no two dances looked even remotely alike – made for an interesting evening. I’ll look forward to next year’s edition.