Based in The Netherlands, for twenty years ISH Dance Collective has been taking street skills and forging them into dance performances. It can be seen as part of the breaking down of boundaries between dance and areas such as modern circus. But, enough of philosophising, this is a great fun show. 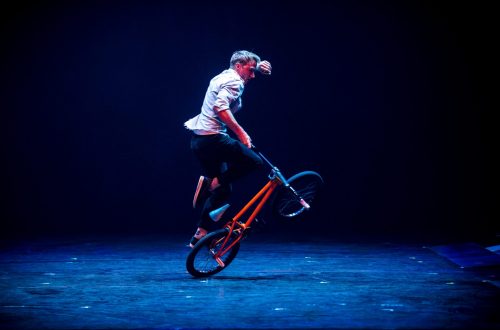 We see breakdance, skateboard, BMX, inline skating, freestyle basketball, free-running, on their own and combined in a myriad of ways by Director, Marco Gerris. On an adaptable stage, making a series of curve surfaces and supports, our street heroes risk life and limb to keep us entertained. Afterwards, one of the artists told me that they had been making changes on the afternoon of the show, because of injuries to the team – all too understandable.

Highlights for me included Michael van Beek doing unbelievable things with a basketball. Spinning it on his finger; keeping control through a series of complex rolls and tumbles; juggling multiple balls – amazing! I had trouble enough controlling a bike on the road, but Dez Maarsen spins and twirls his bike around in ways that defy belief and the laws of physics. Inline skaters Jelle Briggeman and Sven Boekhorst roar up and down the curved platforms and then cartwheel over each other at high velocity. 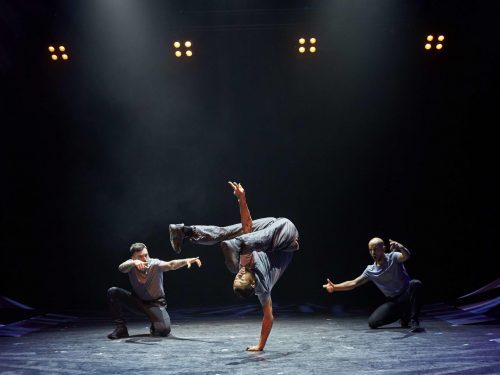 Breakdance artists, Dietrich Pott, Thomas Krikken and Arnold Put move powerfully, spinning on their hands and twisting their bodies in knots whether individually or in patterns for the three of them. Annie Tangberg on electric cello and Vera van der Bie on electric violin provide music both at times soothing and at others nerve jangling in line with the scary moves we see before us.

I wondered if the performers could maintain the hectic pace and for the most part they did. One small caveat: the introduction where they run back and forth on a curved wall makes a weak beginning for such a knock-out show. Once they got going, the audience roared their appreciation and gave the team a standing ovation at the end.