James Cousins Company can be relied upon to offer a programme that gives food for thought. The meaning may not be immediately accessible, but the movements stir emotions that linger on. His dance language is distinctive, it has purpose and integrity and in this diverse evening of duets, speaks in many dialects. 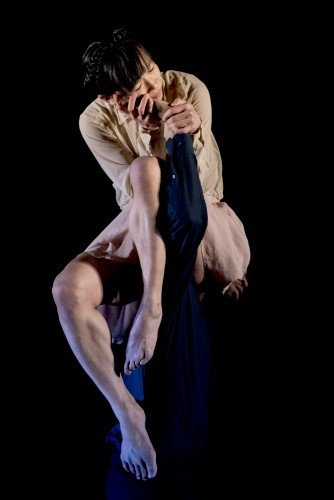 The opening duet, Within her Eyes, moves to another dimension as Chihiro Kawasaki suspended in a pocket of light reaches out to the darkness that surrounds her, her eyes filled with longing. The instant the lights come up she falls but her partner, Rhys Dennis is below to catch her in his arms and for the next seventeen minutes he carries her weight, supporting her body in a duet of great intimacy but little direct eye contact. Only towards the end when she kneels on his lap as they look directly at each other before he lays on the floor with her body stretched out over him.

Within the limits Cousins sets, never allowing Kawasaki a footfall on the stage, he finds a wealth of innovative moves allowing her to wheel and fly through the air but never losing touch until the final moment when she is again suspended mid-air in a spot of light and Dennis slips away to walk off into the darkness. It’s a short poignant work that leaves a powerful memory. 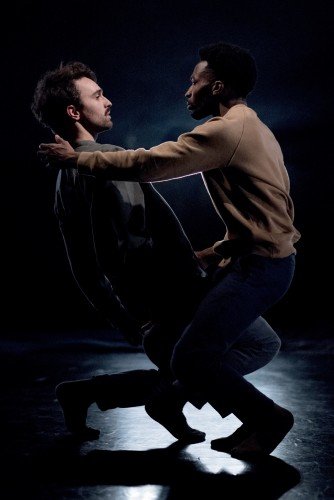 James Cousins Company, In Between Us Is Me, dancers Georges Hann and Rhys Dennis
Photo: Camilla Greenwell

In Between Us is Me, is a male duet as Dennis teams up with Georges Hann. The sound score, by Matt Davies, rises to ear splitting levels then quietens as two casually dressed men face one another. Their gaze is intense yet inscrutable as they slowly move to meet before initiating a free flow of movement tumbling in slow motion, soundless and graceful. Their movement has a beauty of its own, even when the mood becomes more aggressive and Rhys fights his inner demons in a desperate solo. The final confrontation leads to an embrace and a sudden switch as the two men are replaced by two women and another change in mood for, The Secret of Having it All. Jemima Brown and George Frampton, dressed in pale tights and tops, working side by side, launch into a soft shoe shuffle, but there is none of the toothy grins or levity we associate with musical theatre, as their energy and attack is tinged with desperation.  Cousins’ choreography morphs into something more contemporary with an intriguing hard-nosed edge, powerful and rhythmic but with little emotion and no contact. Driven to exhaustion by the hypnotic pulse, they pause for breath as parcels of glitzy costumes drop from the flies. 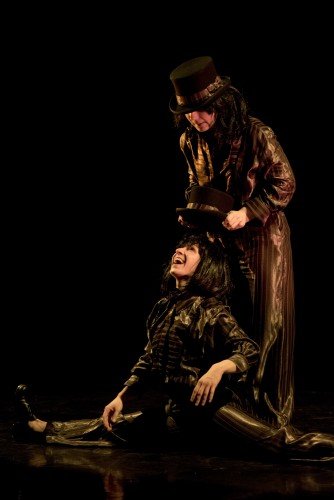 James Cousins Company in The Secret Of Having It All, dancers Jemma Brown and George Frampton
Photo: Camilla Greenwell

The last section takes a strange narrative turn. The women, now in shiny suits, black wigs and hats launch into full-on musical mode spurred by a voice over, ‘we’ve got to get better’! The men are back, now bare-chested and their dance is more tactile. The scene changes, the women, stripped to underwear and dancing in close contact help each other to dress in many layers of clothing, the gestures as tender as a mother and child. As they leave, the lights come up one last time to reveal the men in a close embrace. Just when you thought the show was over, a post-applause reprise introduces Cab Calloway’s Jumpin’ Jive and tap shoes on, the women surprise us yet again.

The Cousins is a choreographer who knows how to engage and hold an audience and this programme of three duets gives a glimpse into many facets of human relationships and behaviour. You won’t find answers, but the pictures stay.