James Cousins is one of the UK’s leading young dance makers and it was fitting that Battersea Arts Centre (BAC) invited him to organise an opening event for the venue now that Covid regulations have been relaxed. BAC, an old Town Hall building suffered a terrible fire a few years ago and the management team decided to leave some of the fire damage in place, as it formed part of the history of the hall. It was fun just wandering round the eccentric variety of BAC.

Cousins decided to go large. Alongside an augmented list of his own dancers, he brought in students from his alma mater, London Contemporary Dance School as well local young people – a total of 70. Rather than a prescribed tour of the building, the audience were free to wander around the spaces large and small and corridors, sometimes helped by beckoning gestures if a fresh event was about to take place. So, every audience members saw something different. 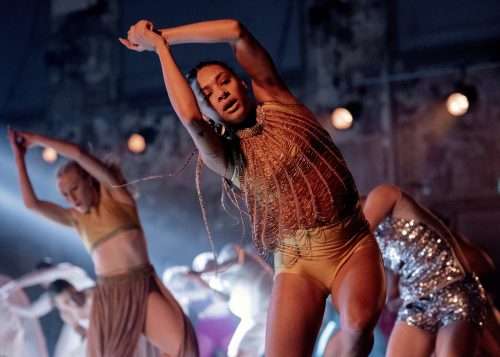 James Cousins Company: We are as Gods
Photo: Camilla Greenwell

We started by climbing the grand staircase draped with angelic figures in white in stasis or moving slowly to new positions. A room featured two more angels apparently concerned at their situation and countless balloons that drifted around as we kicked them. On to a larger space with an illuminated cubic frame. After a few minutes of lighting effects on the frame, a series of dances took place over some fifteen minutes in and around the frame with solos, a quartet and a duet. The latter was the most memorable with deeply sensual lifts and entanglements at high speed.

The dancers wandered off and so did we. Adjoining smaller rooms featured more solos and duets with steamy movement usually to the fore. Later on we saw an ensemble work for around twenty young dancers and it provided the opportunity for Cousins to show his ability with larger groups – with circles, tight throngs and individuals lifted up, it always kept my attention. Finally, to the grand ballroom with a series of dances, culminating with all 70 perfectly synchronised to pop rhythms and at the end we were invited to join in – how could I refuse! 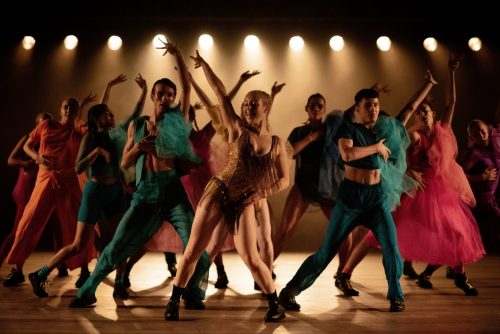 James Cousins Company: We are as Gods
Photo: Camilla Greenwell

Takeaways from the evening: this site specific work left me with memories that will remain a long time; Cousins’ choreography continues to achieve at a high level and his company performers are some of the finest around in UK contemporary dance. They deserve a full listing: Alethia Antonia, Jemima Brown, Tom Dunn, Georges Hann, Meshach Henry, Amy Hollinshead, Chihiro Kawasaki, Salomé Pressac Matt Sandiford.