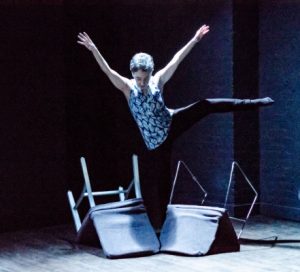 Inheritance: A Litany is a frankly autobiographical and viscerally touching solo work conceived and performed by the multi-talented Janis Brenner. Not only has she had a career as a brilliant solo dancer, she’s also a highly accomplished vocalist and choreographer with a unique sensibility for the language of the stage. The piece is an intimate gift offered in the intimate off-Broadway space at Theatre Row in NYC. Having won several prizes last year, it was selected this year to open the United Solo Theatre Festival 2019 on September 19th.

Ms. Brenner holds forth for close to an hour unpacking her own biography and its influence on her present. When one initially thinks of inheritance, the word suggests assets received or acquired such as money or an estate. But Brenner has a whole lot more to say about inheritance. She makes use of dance, text and vocalization to communicate an exploration of heredity, heritage, legacy and familial traits, both physical and emotional. Who hasn’t at some point felt or in some cases feared “becoming one’s parents”? Brenner avows it: from her mother she’s inherited her wavy hair, her singing voice, her sarcasm and the diamond ring she sports. From her father: his nose, his impatience, his sense of humor, his righteous indignation, his wallet. And as for her “lack of height,” she charmingly blames them both.  Brenner continues her analysis of this journey in articulated detail.

The word litany also appears in the title, and Brenner mines all aspects of this word too. In its context as a series of repetitions in the framework of devotion or ritual, she relays snippets of conversation with her parents as recalled from differing periods of her life. The combination of movement with storytelling affords a rich visual and sensory stimulation to experience these clearly defined moments stored within her body memory. Whether full-bodied or gestural, her choreography serves to highlight the meaning of key talking points. For example, an instantaneous facial expression etched in stage light suggests that universal parental last word, “I told you so!” A diagonal body reach or dart can embody a teenage yearning or youthful effort while a physical release of body tension portrays vulnerability. Her body performs sweepingly and seamlessly in tandem with the driving narrative she delivers. But as the danced story continues, we are treated to the repetition of the movements with fewer words. Presenting her familiar discourse primarily visually provides a concentrated version that satisfyingly solidifies its meaning. And thus she has found a way for movement to sustain meaning beyond the need for words.

I have only briefly mentioned that Brenner has a rich, trained singing voice (as noted, for which she thanks her mother) that she uses evocatively with song, vocal sound and breath. This similarly adds corporeal and emotional depth to her tales. For example, in recapitulating a particular memory, a verbal stutter may eventually become a haunted, stuttered breath.

But lest we forget the other meaning of the word litany, there is its more qualitative side, as in a prolonged tedium or a litany of complaints. This lends itself nearly perfectly to recounting the effects of parenting through the eyes of a youngster making her way to adulthood. Here Brenner provides her most fast-paced whirlwind of memories ranging from funny, to sarcastic, to playful, conjuring parental expectations, awkward life lessons, and didactic non-symbiotic parenting approaches. This is accomplished through verbal and physical crispness and clarity.

And just as we, the audience, are in the midst of enjoying some combination of rollicking and déja-vu, (we’ve all been there in some sense or another in our own pasts), the litany changes dramatically with the single question, “Hello? Mom? Are you still in there?” From this point, we must face the fact that we will all grow up and have to deal with the aging side of life. Many of us first learn that, in fact, by watching this trajectory in our own parents. Theatrically, there was some foreshadowing of this moment whether we chose to take it in or not. “Dig a hole in the cold ground” was the single line voiceover from The Weavers’ song, “Darling Corey” that had opened the piece. As the piece continues to proceed, it now unfolds with the gravitas and existentialism that tends to attach itself to maturing and maturity. The answer to that question, “Mom? Are you still in there?” informs us that Brenner’s mother, Sandra, suffered a slow loss of mental facility. Her father Melvin passed away first, despite his rebuttal, “Not me,” when his daughter happened to mention that we are all going to die. When Brenner chooses to sing The Weavers’ full song sitting with her back to the audience, this is not meant to be a “musical number,” but a song of private nostalgia. She had preset the original family album on the stage along with others from her childhood.

Most tragic is the list of questions she should have asked when her parents were still alive to answer, but didn’t. Each specific question ranging from curious to essential is prefaced with a reminder to self that she should have asked this, and is followed promptly by her own realization that alas, she did not. This is the performance of a devout personal litany. Never an overarching moment of drama, the questions are read with a quiet reflection that underscores each by acknowledging sadly that it can now no longer be answered. This is gripping.

The more elegiac moments place the piece in its specific time and place: Long Island, mid-1960’s and onward. Hearing the voices of Sandy and Mel guiding their young daughters in the lighting of the menorah at Chanukah on an audio tape that has stood the test of time could not be more poignant. And experiencing all the kibitzing and foot-wetting necessary to retrieve the ritualistic steps to re-master this now rusty, yet annual ritual was heartwarming and familiar. Bittersweet too was the music that followed us into the theater as we first entered. The music of our parents, in this case by the likes of Louis Armstrong and Rodgers & Hammerstein, filled with their dreams and memories wash over us at home until we find our own songs.

Inheritance: A Litany in all its ramifications is explored through this performer’s life’s training. It’s a daughter’s parable thanks to the family that formed her. Brenner’s chosen stories are at once particular to her and yet also emblematic. I left the theater knowing much more about the artist and more about myself.