Carmel Morgan
The Kennedy Center’s Terrace Theater officially reopened on October 18, 2017, after an attractive makeover. In celebration of this renovation, and in honor of the $3 million gift from the government of Japan that made possible the theater’s opening in 1979, a special performance called Japanese Connections took place. After some opening remarks, the evening started with a short film tracing the theater’s history. Japan’s generous monetary contribution commemorated the bicentennial of American Independence in 1976, and the original opening night featured a kabuki performance.

The new and improved theater sports, among other things, rich red carpeting, purple plush seats, and handsome acoustic wood paneling, plus freshened up bathrooms with gleaming tile. At intermission, I was disoriented for a moment, as I’d forgotten that the theater entrances and exits had been moved, too. In addition to the theater updates, the Kennedy Center commissioned FANtasy in Japan Blue, an installation by Japanese textile artist Reiko Sudo in the Hall of States. Hanging from the ceiling, upside down, were 115 fabric fans in 46 of the 48 shades of Japanese indigo to evoke the 46 years of John F. Kennedy’s life. This installation is brilliant in many ways. The colors are dazzling, the patterns interesting, and the open fans recall both good fortune and associations with Japan’s traditional performing arts like Noh, kabuki, folk dancing, and classical buyo dance theater.

It was a pleasure to be present on this happy occasion, especially because I owe much thanks to the government of Japan, as well, for hosting me as an English language teacher from 1993-95. I’ve maintained a love for Japan and its people since my first visit to that country in 1985, and I continue to nurture my relationship with Japan through my participation in a book club and my attendance at a variety of cultural performances in the DC area each year. Obviously, dance is a special love of mine, but not a lot of Japanese dance comes to Washington. Thus, I was thrilled that the reopening of the Terrace Theater embraced dance. Yet Japanese dance it was not, not exactly. 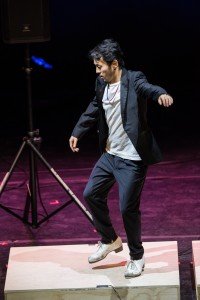 The performance began with Kazunori Kumagai, a Japanese tap dancer who resides in Brooklyn, New York. If there’s a form of native Japanese tap dancing, I’m unfamiliar with it. Kumagai, instead, is trained in American-style tap. It’s unsurprising, I guess, that he’s pursuing his passion in the United States. Kumagai was accompanied by international jazz artists Masa Shimizu (guitar), Samuel Torres (percussion), and Alex Blake (bass). Blake, in particular, stole the spotlight, sometimes literally. He rocked his bass, sang along, and aggressively grooved. Kumagai danced on top of two elevated wooden platforms, but he also stepped off of them now and then, and when he did so, he skirted the front edge of the stage, which was unlit. Accordingly, his shape was sometimes lost in the darkness, but the sound of his feet could still be heard shuffling.

Kumagai’s white shoes began with a light touch, offering small wiggles and miniscule scattered rhythms. As the music became louder and more intense, so did Kumagai’s steps. He kept up a conversation with the musicians, his feet echoing the calls of the notes. Kumagai’s movement and noise joined as equal percussion instruments. 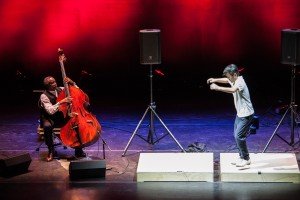 As time went on, Kumagai warmed up further. His limbs flew around more easily, and he finally smiled. His interactions with the musicians loosened up, too. He listened well and vocalized with his feet in response. From stomps to quiet strokes with the tip of a toe, from a vibrating leg to springy jumps like a suddenly frightened cat, Kumagai followed the musical path the jazz music provided. The performance closed with a jazz/tap version of Fragile, by Sting. Kumagai and his guests, with enviable synergy, furnished a stimulating auditory experience that wasn’t terribly Japanese, but was perfectly enjoyable.

Koto player Yumi Kurosawa took over the second half of the grand reopening. What a beautiful and charming personality she is. The koto is a traditional Japanese stringed instrument that reminds me of a horizontal harp. Kurosawa began with one of the most traditional Japanese tunes there is — Sakura (Cherry Blossom). Wearing not a kimono, but a flattering vivid blue dress with shiny Tiffany blue heels, she dexterously plucked the strings. She informed the audience that she comes from a family of musicians, and she explained that she found creativity without boundaries in the United States. Indeed, one can imagine that life in New York City affords her the ability to forge unique collaborative partnerships and to experiment more widely than would be possible in Japan.

Kurosawa played excerpts from Vivaldi’s The Four Seasons, which is quite a feat on the koto. It requires fast moving fingers to create those divine sounds. After two very classical pieces, Kurosawa was joined by hip hop dancer Virgil Gadsen, who famously appeared on the TV show So You Think You Can Dance. The koto/hip hop combination reminded me of Yo-Yo Ma and Lil Buck performing The Swan together. Kurosawa and Gadsen weren’t quite as virtuosic as that aforementioned pair, but they might get there, and their joint exploration was enlightening and worthwhile. 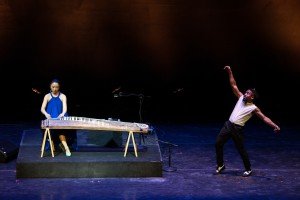 Kurosawa expanded far beyond traditional koto performances by taking her music outside of Japanese confines. She tapped the side of her instrument with her hand, and even stood up and danced a little herself. Gadsen presented a toned-down version of hip-hop, with all the smoothness but less punch, to accompany her lyrical music. He floated in unusual ways, gliding back and forth on his feet, then popping up from the floor, his body impossibly hanging in the air like a released soul. Much of the dancing involved mime and robotic movement, and a lot of freezing mid-pose. Somehow, with the glistening string music added, this seemed elegant, and oddly compelling. He might have been a ninja in training as he leapt in place, like an acrobat on a tightrope. Both Kurosawa and Gadsen were magically expressive. 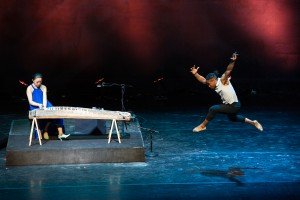 To close the program, Kurosawa debuted Inner Space, her first original composition, which showed off the many wonderful things a koto can do. The music was complex and transportive, with a crisp melody that circled around.

I’d keep an eye on all of these artists. While the evening didn’t conjure Japanese arts in the traditional sense, it did highlight two Japanese artists who are engaging in creative life in the United States and who make inventive collaborations a central part of their work. The theme of friendship between nations and working together was a great way to kick off the new Terrace Theater.