Jessica Lang Dance is celebrating its 5th anniversary year with a week-long engagement at the Joyce Theater. The five dances on the program, including three New York premieres (Solo Bach, Thousand Yard Stare, and Sweet Silent Thought), showcase Lang’s strengths and versatility over the course of her choreographic career, as well as the caliber of JSD’s dancers. While some of the dances are more memorable than others, each displays Lang’s lyrical, surprisingly athletic, and straightforward but at the same time complex choreography – and yet they all looked quite different. All of them visualize narrow dance subjects and rely more on imagery than on depth of content – they’re paintings that move – but the images are frequently unusual and memorable.

The program’s first piece, Solo Bach, which Lang choreographed in 2008, is a lively, jaunty, upbeat opening dance to works from The Six Sonatas & Partitas by Johann Sebastian Bach. Although it’s well-crafted (particularly for an early choreographic effort), and was performed crisply by Patrick Coker, the piece looks as familiar as other, similar solos (and the Bach music sounds like, well, Bach). It might work better as part of a suite of Bach dances, but on its own, it’s lightweight. 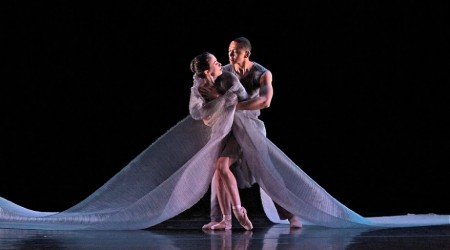 Among The Stars, on the other hand, is a lovely dance that stands on its own as a luscious duet despite its relatively trite subject – love (or dreams thereof) sought, found, and lost. Here, in addition to choreography that displays physical and emotional attraction with both taste and passion, without sacrificing one for the other, Lang ties the piece together with skillful use of a prop – a near stage-length swath of chiffon-like fabric. Initially, the fabric is attached to a white leotard worn by Laura Mead (the effect is as if she was a bride – or the man’s dream of one). Mead approaches Clifton Brown, who is kneeling as if in deep thought. During the course of the ensuing duet (which includes gorgeous soaring avian lifts), the fabric, which had detached from Mead’s costume, at various times becomes a border between them, a river bed, a ‘scarf’ carried by both at opposite ends, and a wrap. Like the subject matter, the way this prop is used sounds trite as well, but in Lang’s hands, and in the performances by the two dancers, each of whom is a company veteran, the impact is both simple and beautiful (as are the simple costumes by Elena Commendator). And the sad but inevitable ending is stated succinctly, but not milked. Lang knows enough not to have a dance overstay its welcome. 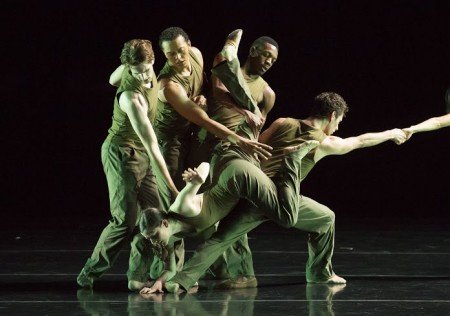 Changing gears again, in Thousand Yard Stare, which Lang created last year to music by Beethoven (the Third Movement, Adagio, of his String Quartet No. 15, Op. 132), Lang has crafted a soldiers’ tale of sorts. Dressed in khaki green costumes designed by Bradon McDonald with various ‘drawings’ on the shirt backs (they were difficult to discern though the atmospheric green haze, but they seemed to be mostly of faces), the nine dancers enact what appears to be an engagement of forces (possibly across a thousand yard separation), complete with battle weariness, fear, anticipation, prayer, and startlingly explosive lighting effects (designed by Nicole Pearce). The imagery is interesting, moving, and effective (for example, a dancer crawls through the legs of other dancers,  at once navigating through a trench and through the bodies of others. 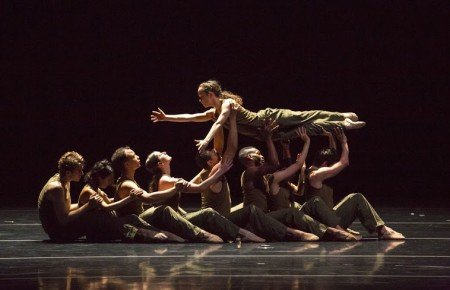 These images, however, are not ‘real’ engagements, and the ‘thousand yard stare’ is not a gap between forces. Rather, these are veteran soldiers’ memories of battles relived and horrors revisited. Once it becomes clear what Lang is doing (it’s not apparent at first, notwithstanding pounding, interestingly staged ‘march’ simulations), the interactions among the dancers become not just choreographed isolated war images, but emotionally vivid memories, reconstructed perhaps by a veteran suffering post-traumatic stress. [A hint is provided by the accompanying music Lang selected – it was composed following Beethoven’s bout with a serious illness, and in thanksgiving, he subtitled the Movement Heiliger Dankgesang eines Genesenen an die Gottheit, in der lydischen Tonart (Holy song of thanksgiving of a convalescent to the Deity, in the Lydian Mode).] It’s a stark, and in its way, terrifying piece.

Lang’s most recent piece on the program, Sweet Silent Thought, to an original score by Jakub Clupinski, is inspired by five of Shakespeare’s sonnets. The four dancers – John Harnage, Kana Kimura, Milan Misko, and Mead (a mesmerizing dancer who added significant emotional depth to whatever she performed), dressed in white costumes, each of which had several short black parallel lines on the backs of their costumes – for no apparent reason other than design.  The dancers are clean slates on which the words of the sonnets are choreographed and performed. The sonnets themselves are not printed in the program, which is unfortunate because the readings from the sonnets that overlay the dance were difficult to hear, and consequently the interaction among the dancers, though providing interesting visual images, don’t necessarily correspond to anything in particular. 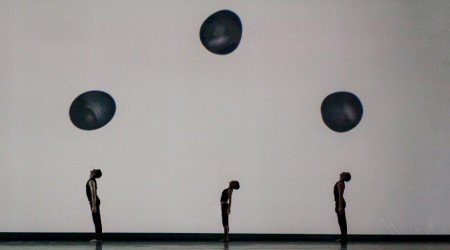 The closing piece, i.n.k., created in 2011, may have been considered innovative at that time, but now is a clever and very entertaining oddity, but nothing more. To images of moving ink droplets and spills projected across an upstage drop, the seven dancers move like…ink droplets and spills. The video projections (video at by Shinichi Maruyama; video editing and composition by Tetsushi Wakasugi and Jackson Notier) are curiously intriguing, and Lang has enhanced the dancers (clad in ink-black) corresponding movement so that they’re not simply copies of what appears behind them. At times, through Pearce’s lighting, the dancers’ silhouettes are projected against the back wall as if they were additional ink blots, rather than simply copies of the ink projected on the rear drop. It’s very well done, but ultimately it’s not more than an unusual, and unusually well-constructed, concept piece. 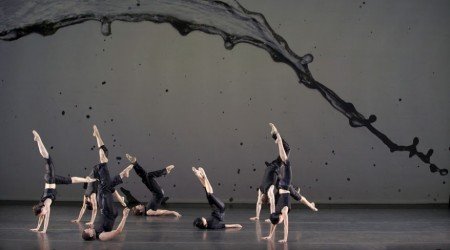 Lang recently announced that her company and school will be moving to its first home in Long Island City, Queens in September, which is as much a milestone as the company’s fifth anniversary, and from which one can anticipate that Lang will choreograph pieces with greater depth, but with the same choreographic skill, that she has displayed to date.