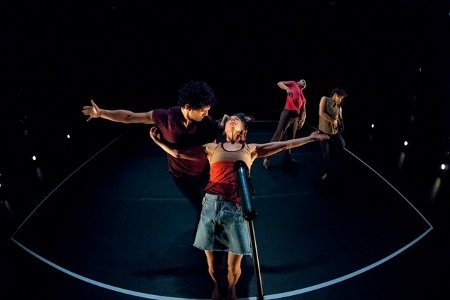 For the second week in a row, I ventured outside DC to the Maryland suburbs to see a dance performance by a San Francisco-based contemporary dance company. Last week I saw ODC/Dance at the University of Maryland, and this week I saw the Joe Goode Performance Group (JGPG) at the American Dance Institute in Rockville, Maryland. JGPG’s artistic director and choreographer Goode and six performers (two women and four men) brought with them The Resilience Project, a dance/theater piece examining human trauma and our ability to cope with tough times. Through interviews with combat veterans and their family members, Goode created a work that takes personal pain and shows us what lies beyond it.

The Resilience Project combines text taken from interviewees, original songs, and movement. Performers must dance, sing, and speak clearly to give voice to the stories related to them by injured soldiers. Some injuries hinder people from physical activity, but there are deep emotional scars, too, that provide significant hurdles to many veterans. JGPG presents these injuries with honesty and compassion. Performers literally fall to the floor, but they also stand up again, and are assisted by others. The lesson seems to be that finding strength isn’t always easy, nor is asking for help, but it is often through accepting help that we move forward.

In simple t-shirts and bottoms, the performers look like they could be your neighbors, and that’s surely purposeful. The tales they relate come from the community. The images are rich and full of impact, as are the words themselves. The words are given sometimes very literal movement translations, and sometimes the movement is more abstract. The feelings exposed are complex. While a performer describes stepping off a plane in Iraq, the audience sees arms outstretched, tilted like airplane wings, and a performer stepping on the backs of others. When a wife tells the devastating news that her husband announced he could no longer live in their home, the performers move in an off-kilter fashion.  A performer discussing post-traumatic stress disorder crawls toward a microphone dragged at an angle across the floor. He talks about searching for bombs even after returning from war, about how he views children as a threat because children were used to deliver devastation overseas. A pair of performers together through movement and words portray the difficulty of a veteran who has returned to the United States with emotional wounds that are tended to through drink and drugs. One performer of the pair, in a woozy fog, tumbles away.

Gender plays a role in the stories in interesting ways. A female soldier expresses frustration at the fact that upon coming back to her home country from military service overseas, her gender seemed more important than her skills. She learns to find freedom in loneliness, and she also finds the ability to pick herself up. A female spouse struggles to support her male partner, who refuses to seek help when he returns, as he views asking for help as a form of weakness. Indeed, many of the tales have threads in common. Whether male or female, there is reluctance to reach out. There is also anxiety and embarrassment. A DC-area veteran spoke about being smothered with attention and having no chance to be introspective. Another veteran said it was the relentless procession of friends urging him to make an effort which ended up being helpful.

So, does one leave the performance understanding more about resilience? Maybe. One interviewee describes “resilience” as the “illusion of coping.” “Resilience” can seem like a word forced upon those facing tragic circumstances, encouraging them to “buck up.” If you’re not as resilient as society expects, are you a loser? Goode’s choreography makes the feelings of the veterans palpable. The movement shows a process of rebuilding and letting go. Performers link arms, they lean on each other.  Toward the end of work, when one persons dips, there is someone else ready to catch him or her. The closing words of a mother who has undergone incredible loss are heartbreaking and uplifting, too. She talks about the surprises grief offered to her. The Resilience Project takes the tears and burdens of many and leaves the audience the small surprising bits of beauty about which this mother spoke.