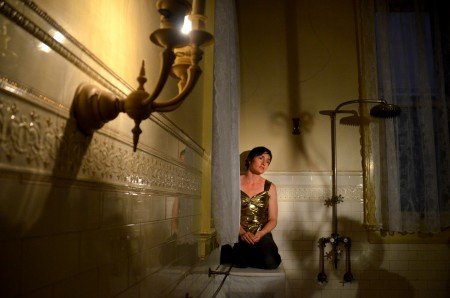 Running until August 5th, Still Standing unfolds in Haas-Lilienthal House, a Victorian mansion that has stood proudly in San Francisco’s Pac Heights neighborhood for over one hundred and twenty-five years. Still Standing fills every nook and cranny, every tight corridor and every roomy expanse of this ornate structure with live art. Before the expedition began, we were treated to a delightful introduction from Artistic Director Joe Goode. He talked about how this house was constructed for immigrants. He talked about taking risks, the bravery of starting over and how San Francisco embodies this spirit. And he talked about two threads – reinvention and repair – and how they would underscore and inform what we were about to witness. Then, after a folksy choral offering by the entire cast, the voyage began. The audience was separated. Each sub-group was then guided on a distinct route through the house. New characters emerged at every turn, as did a heady Dance Theater brew of physicality, song and text.

While I adore site-specific work, I do struggle with Dance Theater as a genre. Its themes and concepts are often so far abstracted that they seem to disappear altogether. And with them goes the cohesiveness of the piece in question. Not so with Still Standing. It was a strong Dance Theater work with a solid conceptual throughline. As Goode had outlined, reinvention and repair would be woven into every fiber of Still Standing. And indeed, they were. Yes, the concepts were abstracted, but not to the extent that they evaporated into the ether. In the various sections that I saw, the narrative was both steadfast and penetrating. Reinvention and repair of gender, of age, of familial relationships, and of the body were fully explored and mined. 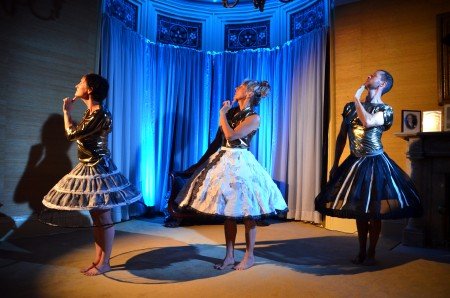 Many of the chapters in our group’s trajectory took the form of embodied monologues and conversations – storytelling infused with gesture. There was Lola’s triumph over gender binary. An aunt and her nephew conversed about structure, expectations and aging. And another woman contemplated the desire to be nice juxtaposed against the satisfaction of saying what one really thinks. While I enjoyed all of these episodes, I was most excited at the prospect of full choreographic statements, especially considering the dance prowess of many in Still Standing’s cast. We would encounter three (other audience groups would of course have a different experience) before Still Standing came to its conclusion. Each was well worth the wait, especially the first one, which transpired on an outside staircase. A solo by Molly Katzman, which eventually grew into a tactile, sexy duet with Cookie Harrist, fully satiated my choreographic craving. Smooth, 1970s-inspired music framed the scene. The movements unfurled with a similar laid-back flow – body rolls, undulating hips, deep rebound and suspension. The duet almost happened in slow motion, the two dancers savoring each step and movement. And in thinking about Still Standing’s overall theme, this pas de deux felt like a reclaiming of eroticism and sexuality.

A later ensemble sequence of stretched arms, extended legs and pulsing torsos was set within one of the house’s smaller rooms. What struck here was that even in a small space, the movement never once looked constrained or marked. Then, in the final moments of the work, eight dancers unpacked another group phrase in the same space where Still Standing had first begun. Sharp directional shifts imbued this choreography; purposeful changes in levels, patterns and dynamics; strong cantilevered partnering; direct, confrontational eye contact with the audience. Everything looked definite and precise, no measure of ambiguity in sight. Perhaps Still Standing’s reinvention and repair had awakened new or revived old confidence.

Music tends to play a significant role in any JGPG production, and it did here as well – songs, instrumentals, sound and vocalizations. In past works, I’ve noted that much of the music, particularly JGPG’s vocals, sound very similar; similar harmonies, similar dynamics, similar speed. But in Still Standing (original score by Ben Juodvalkis as well as selections by Tassiana Willis, Lila Blue and Shawna Virago), the music was so wonderfully broad and varied. There was musical theater, rock, pop, and emo. There were canoned offerings, layered soundscapes and diverse SATB harmony. There was a fantastic solo for Marit Brook-Kothlow that conveyed the cleansing, repairing and reinventing power of the flame. And you cannot omit the cast from any discussion about Still Standing’s music. They are all formidable musicians. Not dancers who can sing a bit or actors who might know a few tunes on an instrument. Their musical acumen is no joke.

Only one part of Still Standing didn’t work for me – the gilded masks that the audience were required to wear throughout the piece. They felt a little gimmicky, and a gimmick that Still Standing didn’t really need. Having said that, I can see some connections between the masks and the narratives in the piece. I suppose the masks provided a degree of anonymity and egalitarianism – repair and reinvention is for anyone and everyone. Sure. And I guess that repair and reinvention could be thought of as taking off metaphorical masks. But these themes were communicated clearly through the theatrical devices in the work. No extra layer, or in this case eye mask, required.